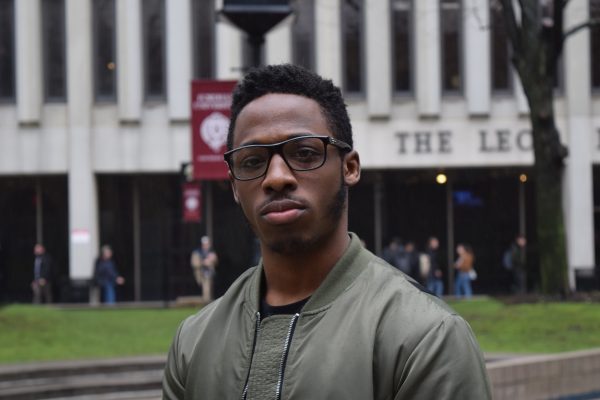 I recently met up with Wayne “Juice” Mackins, Fordham College at Lincoln Center (FCLC) ’19, on a dreary, cold spring morning in a crowded coffee shop off Columbus Avenue. Dressed in all black, from his hoodie down to his sneakers, he looked worn out. As he entered the coffee shop where I was waiting, he scanned the room, looking to find me among the crowd of people. The minute we locked eyes, he smiled.

After a hug and the usual pleasantries, Juice and I made our way to the line where I told him to order whatever he wanted because the trip was on me. Initially, he refused, but my stubborness won, and, after a few minutes, we sat at a hightop table laughing, me with a hot chai latte and he with a frappuccino and a warm sandwich.

Wayne was in rehearsals for the last Mainstage show of the year, a new version of William Shakespeare’s “Macbeth” set in a post-apocalyptic Scotland. Directed by Dawn Saito, professor of movement and acting in Fordham’s theatre department, this version of Shakespeare’s most famous tragedy incorporates dance and butoh, avant-garde Japanese movement, to help the actors express the darker side of the human condition through movement.

For Wayne, incorporating extra movement into his performance was natural; before he was an actor, Juice was a dancer. Growing up in Chicago with a sports-loving family, Juice desired to find a hobby that would distinguish him from everyone else. “I don’t want to be related to anybody else,” he explained. “So at a young age I thought, I’m going to do something different. I’m going to dance.”

Juice’s eyes lit up, and he began to laugh as he recalled the exact moment he fell in love with dance. “I was sitting on the couch with my grandfather watching Michael Jackson and Usher on stage performing together. The reaction shots from the audience amazed me. [I realized] you can make people laugh, cry, smile and go through the entire range of human emotions with performing. That’s what I want to do.”

While still living in Chicago, he began taking dance classes at the YMCA before enrolling in the Debbie Allen Dance Academy at seven years old when his family moved to Los Angeles, where he would stay until he left California to attend Fordham at age 18. Wayne credits Debbie Allen with inspiring him to branch out into other areas of performing. “In high school I transitioned fully into acting, but under Debbie Allen’s umbrella and her expertise,” he explained.  “She made it known to us that we have to learn to do everything. Constantly hearing her say that I had to dig deeper into music, that I had to get deeper into singing, even now I have to learn more with acting… and you know what, I can’t see myself doing anything else.”

Making conversation with Wayne is easy—he is warm and open, willing to speak about anything and everything. The intensity in his eyes is intimidating; you can tell that he is really listening and synthesizing every word that is spoken before he responds. Though quick on his feet, his responses are calculated and well-thought out, a trait that I can only assume he has inherited from his many years of studying lines of dialogue in preparation for becoming a professional actor.

One of the actors Wayne looks up to as he continues to refine his craft is FCLC’s very own Denzel Washington. When the name got brought up during out conversation, Wayne’s mouth dropped to the floor and his usually articulate speech became stuttered and chaotic.

“He is my favorite actor in the world,” he says of the 1977 alumnus. “I found out he went [to Fordham] I mean this is where he started acting, and he started acting pretty late at that people would say so I learned that and I was like ‘Oh my god, Fordham made that man?’ Or it helped cultivate the beginnings of him? I have to go there.”

Before leaving California to try his hand at the East Coast, Juice asked the bicoastal agency that represented him to connect him to their New York branch. When meeting with the agency to discuss how he wanted to formulate his career and what he was looking to audition for, Wayne, never one to not challenge himself, asked for everything… literally. “I want to see what I can do,”  he explained to me as I chuckled at his comment and shook my head. “I said give me everything and then I’ll tell you what I can’t do… voice overs, stage, film, television, commercials, musical theater, give me it all.”

And so they did. Three years into trying it all, it seems Wayne has landed the role that might kickstart the rest of his career: Broadway.

Earlier this year, Wayne participated in a lab of the Broadway-bound musical “The Prom,” helmed by Tony Award-winning director and choreographer Casey Nicholaw and starring Tony winner Beth Leval. In November of 2017, Wayne was seen for what he thought was an early audition for the musical. Instead, after speaking to his friends and colleagues after landing the job, he found out he was actually a new addition at the tail end.

“It was an early morning call, we had to be there at 9 a.m. ready to dance and sing,” he recalled. The youngest one in the room, Wayne knew he had to bring his A-game to make himself stand out among the more experienced competition. Luckily for him, the dance call was first.

“The choreo was fast, uptempo and  specific. The stamina… I was glad they did that because that was like the key, you saw people dropping like flies. While we were dancing I tried to show how much I loved it because I did,” he recalled. Out of 16 men, the casting directors asked Wayne and one other man to stay to move on to the singing portion of the audition. “I had my two songs, I just had to sing it the best way I knew how. My momma always says keep it simple,” he laughed. After performing “Dear Theodosia” from “Hamilton” and “Poison Ivy” from “Smokey Joe’s Cafe,” Wayne left the audition feeling good. A few days later, he found out he got the job.

Before we could discuss “The Prom” too intensely, Wayne was quick to remind me that just because he did the lab, that doesn’t mean he’ll make it with the show when it opens on Broadway at the Cort Theatre this November. Not wanting to jinx his chances, we discussed instead what it means to him that he was able to begin fulfilling his dreams on such a large scale at just 20 years old.

Always humble, Juice averted his eyes for the first time and smiled at the floor. “Well honestly, it means a lot. You put hours and hours and hours into this craft and hope to get recognition for it, but for this to happen to me at 20 years old, it means the world,” he said. “My family was going off the wall. It’s more for them than for me. It’s more validation for the time and effort that they put into me that it’s not wasted or unnoticed.”

And what does Miss Allen think? “That woman is so busy. I called her to tell her and she goes ‘oh someone already told me. I was like, ‘well, still you know I had to call you,’” he laughs. “I called her while she was at an awards ceremony, so it still means the world that she answered. [She couldn’t talk long,] but I could hear it in her voice. She was very proud.”

Since this article was published, Mackins has officially been cast in “The Prom”.  Previews begin on October 21, with an official opening on November 15.