Philosophy Professor Under Investigation Suspended Through End of Year 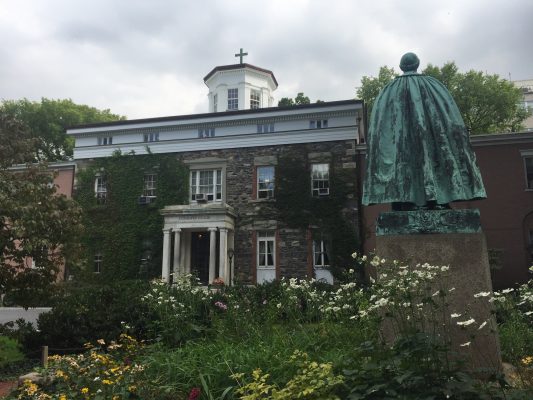 Assistant Vice President for Communications Bob Howe refused to provide the Observer with a photo of William Jaworski, but a link to his faculty profile can be found below. (COLIN SHEELEY/THE OBSERVER)

By COLIN SHEELEY and KATHERINE SMITH

Associate Philosophy Professor William Jaworski has been suspended until the end of the calendar year pending a university investigation, according to an announcement provided to his 6:00 p.m. “AI, Sci-Fi and Human Value” class by the department chairperson Stephen Grimm and Associate Dean of the School of Professional & Continuing Studies Cira Vernazza.

The Observer obtained a transcript of Grimm’s and Vernazza’s conversation with the Monday evening class.

In an official statement to the Observer, Assistant Vice President for Communications Bob Howe acknowledged “Associate Professor William Jaworski has been suspended from his position at Fordham University as of April 6, 2018, pending further formal review,” adding “Since this is a personnel matter, the University will not make any further comment on it.”

Both the Interim Title IX Coordinator Patricia Scaglione and the university Provost Stephen M. Freedman, who is responsible for making personnel decisions following Title IX reports, have referred the Observer back to Howe’s original statement.

Howe refused to provide the Observer with a photo of Jaworski, but his faculty profile can be found here.

Grimm informed the students in all three of Jaworski’s Monday classes of his suspension, explaining that because the process might “take a little while,” substitute professors will be assigned to teach the remainder of his courses through the academic year.

Grimm declined to comment on any inquiries the Observer has made regarding his knowledge of the investigation, but told the evening class, “we’re trying to make it as fair as possible.”

Referring to the previous investigations and the Office of Title IX, he explained to students in the class that “I think that they’ve always taken every allegation very seriously, and sometimes there’s been strong evidence.” Grimm continued, “but sometimes the evidence has just been inconclusive.”

Grimm and Vernazza stressed the confidentiality of the case to the class, particularly after a student asked about the investigative process involving faculty on suspension.

“Right now it’s unsubstantiated allegation,” Vernazza said. “The key is to substantiate or not. Right? So that’s the procedure. That’s the investigative procedure. So try to be fair about it. We don’t know because we don’t know. If you have firsthand experience, you should come forward.”

Multiple students in Jaworski’s 1:00 p.m. “Philosophical Ethics” class have confirmed that Grimm and Interim Dean of FCLC Dr. Frederick J. Wertz, who also referred The Observer to the university statement, gave a similar announcement at the beginning of class.

“They said there wasn’t much they could say at this time,” Emma Himes, FCLC ’21, said in an email to the Observer, “but that they are trying to protect everyone involved including Jaworski so that the situation can be sorted out properly since a lot of information has been flying around.”

She recalled being confused as to why the students from Jaworski’s 11:30 a.m. course were not in the classroom when she arrived before her class. She texted a friend in the earlier course who told her that two people had notified her class of their professor’s suspension.

Himes also said several students had noticed that their emails sent to Jaworski over the weekend were sent back to them with a “Message not delivered” reply from the Mail Delivery Subsystem. Indeed, a request sent by the Observer over email asking Jaworski for comment was redirected with the same message.

Despite concerns circulating about Jaworski for multiple years, some students majoring in philosophy said they found it hard to avoid his courses. Sophie Dawson, Fordham College at Lincoln Center (FCLC) ’18, took Jaworski’s “AI, Sci-Fi and Human Values” class because it was the only philosophy EP4 available, and as a double major with an internship, it was her only option in order to graduate on time.

“I’ve taken classes with him before and hadn’t taken office hours and just dealt with it that way,” Dawson said.

Claire Howe, FCLC ’18, added that, in her opinion, “you just know if you go [to Jaworksi’s office hours], it’s going to be uncomfortable.”

Dawson said because of the low number of philosophy professors at Lincoln Center, “if you’re a philosophy major, you end up having to take a class with him at some point.”

Grimm reassured the students in the class, saying that the transition to the new substitute teacher, Dr. Eric Anthamatten, would be “as flexible as possible.”

Vernazza, too, sought to appease the students. “We’re going to be working closely together–Dr. Grimm, myself, Dean Wertz in the day school, FCLC–to make sure that this is as easy a transition for you as it can be,” she said.

The Observer will continue its investigation of the cause and outcome of Jaworski’s suspension, and will update this article as necessary.