Review: “Mean Girls” Opens on Broadway for a New Age and New Generation 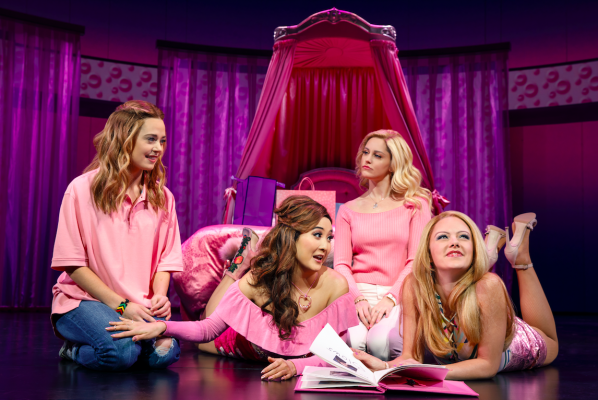 Had there been any doubt that the comedic genius of Tina Fey could not seamlessly carry to the Broadway stage, a new medium for the veteran comedy writer of “Saturday Night Live” and “30 Rock,” her audience may have stayed stubbornly in their seats as the cast of “Mean Girls” gave their bows. Yet, as the stage dawned on this Sunday’s opening of the comedian’s new musical, all had risen, and all eyes had affectionately fixed on Fey’s triumphant transfer to Broadway.

Adapted from the 2004 movie of the same name that furnishes itself among the greatest pop-culture obsessions of nearly every American millennial’s pubescence, “Mean Girls” comes to the New York stage rejuvenated and rewritten for a new age.  Directed and choreographed by the Tony winning Broadway sage Casey Nicholaw, “Mean Girls” feels in every way like a musical made for 2018, teeming from the skinny jeans on its actors to the video design that brings its set to life with the complexities and styles of the moment, the paradoxes of technological absurdities and rigid convictions for simple fairness and equality that must define teenage life in our time.

Bolstered by the musical acumen of Jeff Richmond (Fey’s husband and composer-collaborator on many of her projects, including “30 Rock” and “The Unbreakable Kimmy Schmidt”) and the quick tongue of “Legally Blonde: The Musical” lyricist Nell Benjamin, “Mean Girls” is brought to life by Erika Henningsen as Cady Heron, Taylor Louderman as Regina George, Ashley Park as Gretchen Weiners and Kate Rockwell as Karen Smith.

Though just as in the movie, the musical adaptation is stolen by Cady’s lovable friends Janis (Barrett Wilbert Weed) and Damian (Grey Henson), the former an artsy “space dyke” and the latter “too gay to function,” as the pair narrates the rise and fall of new-girl Cady Heron’s dramatic run with North Shore High School’s terror clique, The Plastics.

Punctuated with classic and famed “Nicholaw moments,” show-stopping numbers of wall-to-wall sound that have come to define Broadway favorites like “The Book of Mormon” and “Something Rotten!,” “Mean Girls” emerges as a genuinely colorful, lively and bedazzled new musical ignited by an electric and menacingly seductive performance by Louderman and a hilariously show-stealing turn by both Henson and Wilbert Weed.

Still, a heavy burden sits on the shoulders of the show’s creative team. They must appease a generation of fans who grew up quoting the movie’s many punchlines and quips without staging the type of prosaic and airless Broadway adaptation that has defined several movie transfers in recent memory (see this season’s translation of Disney’s “Frozen.”) And second, they must somehow reimagine and reinvigorate a cultural icon whose looks and laughs resolutely reside in the flora and fauna of early-2000s comedy.

The musical strides close enough to the movie’s plots and gags to appease those fans coming for familiar mirth (yes, “She doesn’t even go here,” “Danny DeVito I love your work,” “You go, Glenn Coco,” and “Fetch” all make anticipated appearances), without sacrificing innovation and vitality on the altar of self-identity.

Its creators have worked hard to imbue the production with elements of life in 2018 that seem natural and innately funny. Damian is decorated with often hilarious contemporary iconography of gay culture; he wears an Alyssa Edwards t-shirt that reads “Beast!” and the door to his bedroom is covered with “Make America Gay Again” and Beyoncé posters. iPhones are glued to the hands of the show’s obsessively snapchatting cast; “Keep Calm and Love Calculus” hangs on the wall of Ms. Norbury’s math classroom; and cast members in drag routinely pepper ensemble scenes.

But perhaps the musical’s greatest success is the consciousness that exudes from the wit and irreverence of Fey’s writing.  While “Mean Girls” is no “Dear Evan Hansen”-heavy-hitter of teenage life in 2018 (and to be clear, it’s not trying to be) and while its obsessive strive to feel contemporary may at times grow tiresome, Fey and her collaborators have done well to contend with the demands of a #MeToo era in a show of female rivalry and competition, of high school boys and underage sex.

Trang Pak, the high schooler who makes-out with Coach Carr, is missing from the burn book; Cady is not just good at math – she aspires to be a mathematician; Damian and Janis remind us that pink as associated with femininity is a construct of Western society; and when Cady decides to play dumb in math class to woo Aaron Samuels, Janis retorts with “that shit always works,” placing the joke not on Cady for playing stupid, but on Aaron for falling for it.

As Cady descends into the depths of Plastic teenage puerility, Aaron (the love interest) storms away, singing “I see you trying to erase what is best about yourself just to belong. You say ‘more is always better.’ But there is less of you than there was before,” prodding a history of musical theater, of staples in the canon like “Grease,” whose catharsis comes by way of the exact opposite lesson, by a female lead finding happiness and resolution in changing herself for others. Tina Fey offers us a new model for musicals about women and girls, one we very sorely needed, with as many big laughs and as much effortless charm as ever.