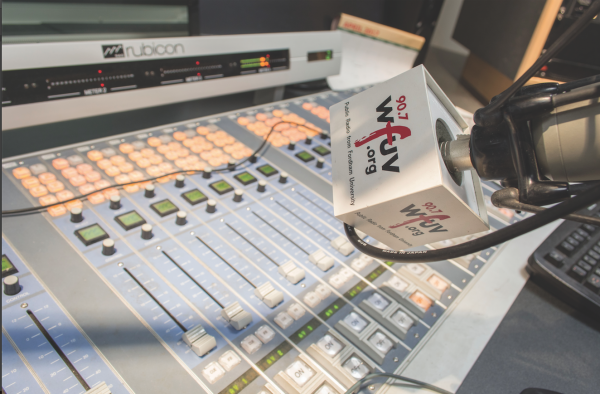 WFUV’s studios offer Fordham students the opportunity for hands-on experience with broadcast journalism, as many then pursue a career in media. (KATARINA MARSCHHAUSEN/THE OBSERVER)

WFUV, Fordham University’s radio station, had its first broadcast in 1947. Located in the basement of Keating Hall on the Rose Hill campus, WFUV is a professional radio station that students have the opportunity to work at during their time at Fordham. There are three channels on the station—music, news and sports. WFUV, which stands for Fordham University’s Voice, is a member of the National Public Radio (NPR)—a non-profit media organization that hosts over 1,000 public radio stations.

Even though Bob Ahrens retired in 2017, he still gives input as the executive producer of the WFUV sports station. For the past 20 years, One-On-One has risen to great heights, and students have been able to attend sporting events such as the Super Bowl and the U.S. Open. WFUV has also won more than 60 awards during that period.

Ahrens took over this position after the retirement of Marty Glickman, who ran the station from 1988 to 1997. Ahrens joined in 1997 and retired in 2017. As a mentor, he insisted that the students who ran and worked at the station have a professional appearance. Since beat reporters from WFUV are sent out to cover all the New York pro teams in every sport, having a professional appearance to a reporter looks good for the station and helps get a future reporter’s foot in the door. Richard Schultz, FCRH ’98, said, We cover every New York team and most major sporting events as professional, credentialed members of the media. This means our students receive real-world, hands-on training and experience, which is exactly the same as what they hope to be doing once they graduate. In addition, our vast sports media alumni network remains extremely engaged in the training for our next generation of WFUV professionals. These opportunities, along with the hundreds of sports events, programs, sportscasts, training sessions and guest workshops, gives our students a well-rounded professional experience before they leave Fordham.”

Schultz was one of Ahrens’ first students. His professional broadcasting career included play-by-play for Army sports and hosting a talk show on an ESPN radio affiliate. When Ahrens announced his retirement, Schultz became the sports director of WFUV. Both Ahrens and Schultz transitioned seamlessly. Schultz said about the program, “WFUV Sports is special because it is a professional radio station, and our students work as professional sports broadcasters while they are here in school. Our sports students receive training and professional experience working in the New York sports media industry.”

At a typical WFUV One-On-One show, there are five positions—producer, engineer, updates, A-host and B-host. The producer basically runs the show, taking care of the microphone levels, doing some sound effects (if the segment calls for it), answering the phone for call-ins and ensuring that the show is running smoothly. The engineer helps the producer with any additional tasks and runs the music when the show returns from a break. An updates person takes care of the “10-30-50 updates” which occur every 20 minutes: on the 10, 30 and 50 of the hour. Updates generally include scores from local college and sometimes national sports, depending on the season and which games are being played. The A-host and B-host work off each other, with the A-host taking the lead and introducing new topics, and the B-host sliding in with statistics.