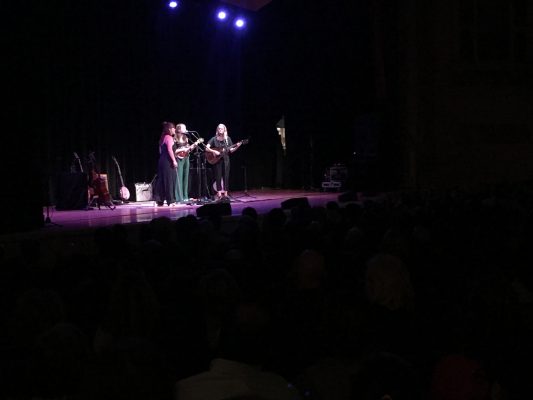 I'm With Her consists of (from left to right) Sara Watkins, Sarah Jarosz and Aoife O'Donovan. (JEFFREY UMBRELL/THE OBSERVER)

The sold-out show at New York City’s Town Hall was certainly a career milestone for the folk-acoustic trio I’m With Her. The band is a relatively new project for Sara Watkins, Aoife O’Donovan and Sarah Jarosz; however, they are all considerably well-versed in acoustic and traditional music. Watkins was a founding member of the experimental Americana group Nickel Creek, O’Donovan led the similarly adventurous Crooked Still and Jarosz has had an illustrious solo career (her 2015 album “Undercurrent” received a Grammy for Best Folk Album).

The three decided to start the group after playing an impromptu show together in 2014. They immediately noticed their strong chemistry and musicianship, and released the single “Crossing Muddy Waters” a year later. They are currently touring in support of their debut full-length album, “See You Around,” which was released back in February.

“I’m With Her” was one of Hillary Clinton’s primary 2016 campaign slogans, and the phrase has caused some confusion for the band regarding their political connections. However, in an interview to The Guardian earlier this year, I’m With Her explained that they had been playing together for 18 months before Clinton, probably unknowingly, adopted the phrase for her campaign.

The band saw no reason to change their name, although they stressed that it was more about camaraderie than politics. Nonetheless, it does highlight their uniqueness as an all-female group in a genre that is predominantly male. The band generally stays away from explicit social messages in its songs, but subtle political themes can be found throughout “See You Around.”

References to gender scatter the album. On “Pangea,” which plays with familiar nautical Americana tropes, Jarosz sings from the perspective of a fisherman: “I’m an old fisherman / Throw out my line / I’ll pull you in / Drive my boat, drive my hook / Pull it out and throw you back into the deep end.” The song’s gender inversions and violent imagery are unsettling, and certainly draw attention to the role of traditional lyrical themes in modern folk music.

Similarly, on “Wild One,” Watkins sings: “I want to climb the hillside / But I hear the women wail / Of a cautionary tale.” The perspective here is a little less clear, but gender is, like in “Pangea,” explicitly identified.

I’m With Her has been touring for the last month or so in support of “See You Around.” Jarosz explained how this leg of the tour has been neatly bookended by two very different New York performances. Back in February, just after the album was released, the band played an intimate show at Rough Trade records in Williamsburg. They then traveled around the Midwest before returning to the city for the much larger, sold-out show at Midtown’s Town Hall. Jarosz emphasized the significance of the concert for the band, and stressed that they did not take the moment for granted.

Throughout the Town Hall performance, I’m With Her played with an energy and confidence that allowed each song to truly shine. Each member showed off her musical dexterity: Jarosz juggled the electric and acoustic guitar, banjo and mandolin, and Watkins the fiddle, guitar and ukulele.

Some of the night’s most surprising moments came towards the end of the set. After a cryptic introduction, the three broke into a near-acapella rendition of Adele’s “Send My Love (To Your New Lover),” a cover they have been performing for a while (a live recording of the song is available on the band’s Spotify page). There’s a high musical risk involved in genre-crossing to this extent, not to mention in covering a song of such popularity, but the band’s rendition is fresh, tight and harmony-filled, and they succeed in making the song their own.

A cover of Vampire Weekend’s “Hannah Hunt” in the encore was another high point. I’m With Her transforms the song’s main piano riff into a canon played on the guitar, mandolin and pizzicato fiddle. For the encore, the band had come out to the front of the stage and was playing unplugged into a single microphone, making their display of musicianship all the more impressive.

“But times are changing / This country’s growing,” sings Watkins on “Overland,” and there’s no reason not to be similarly optimistic about I’m With Her’s future.