The Stories That Create a Culture of Wellness 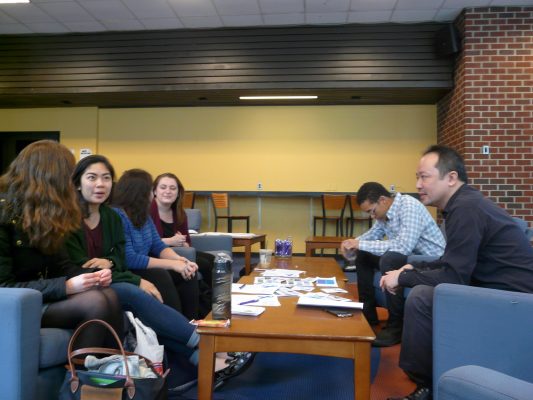 Blackwood hopes that stories like his and Ng’s create a culture of empathy and solidarity. (COLIN SHEELEY/THE OBSERVER)

The projector was not working. One moment, the title screen of Fordham Advocates Cultural Enrichment (FACE) March 5 presentation flicked on: “Mental Health, Wellness, and Culture on Campus.” The next moment, it blinked out to a blue error screen.

Adjusting to the technical difficulties, Lauriann Kormylo, Fordham College at Lincoln Center (FCLC) ’18 and FACE committee member, flipped the script, passing out flyers and wellness self evaluation charts to handful of attendees in the Student Lounge. One was supposed to chart on a Date Tracking Sheet their corresponding rankings on the Wellness Wheel, a self-examination of the conditions that tracked aspects like creativity, personal growth and mental health alongside money, sexuality and spirituality.

Participants had just finished their sheets when Jeffrey Ng, Psy.D., director of Counseling and psychological services and esteemed guest of the afternoon event, walked in. The projector, still flipping between title and blue screens indicated to Kormylo that she would have to work backwards. Samuel Blackwood, FCLC ’19, was the other coordinated speaker, and he motioned for the room to pull their chairs in for discussion.

Ng kicked off the conversation. A clinical psychologist for nearly 15 years, he said was the first to admit that mental health is “a very broad topic.” It requires a conceptual definition of the mind. Ng likes the UCLA Clinical Professor of Psychiatry Dan Siegel’s definition: “an embodied and relational process.”

In that relational process, “certain identity groups,” Ng said, “sometimes have not so favorable experiences.”

His family moved from Hong Kong to Brooklyn when he was three, chased by “legal issues” into the borough’s housing projects. He attended Cornell University through the Higher Education Opportunity Program (HEOP) but felt out of place at the college. “It was completely different when I arrived from the life I grew up with,” Ng said. The cultural standards, expectations and norms were completely unfamiliar to him. For instance, he said that he hadn’t known about flossing until he saw his roommate doing it.

The shock was intense. “I was always conscious of being different,” he said. As a result, he struggled academically, operating with a “baseline anger.” His HEOP counselor recommended he visit the university’s mental health facilities.

He became involved in mental health programs and took up meditation with a fellow student who would later become his wife. “I sublimated my frustrations and my affects into something productive,” Ng said.

Now a licensed clinical psychologist and father, Ng has turned to supporting students like Blackwood with their own challenges and struggles.

Blackwood, too, is an immigrant. Born in Jamaica, he was adopted at five and moved into a U.S. middle class household in New Jersey. As a kid, he visited the island every year and remembers his time there well. His mother and grandmother, Jamaican themselves, “always made sure that I knew that the people were different around me,” Blackwood said.

It was in seventh grade math that he first observed that difference with great import. “It was the beginning of the year, and I got a C+ on my math test,” he said. This was a particular embarrassment for the young Blackwood, as his father had a PhD in mathematics. But when the teacher met with him and his parent, they said it was a fine grade for him. Blackwood was told by his mother: “It’s because you’re black…they don’t expect you to get A’s.”

“I developed kind of an anger at being viewed automatically as not being as good as my peers and my friends,” he said. He strove to be the best at everything he could be but carried that resentment into college.

He thought it would be better there. The microaggressions–“Sam, you’re not Black. You’re basically white,” the non-existent expectations of his teachers, the lack of minority representation among faculty–led him to believe he would have no place at a university. That was not the case.

Students spoke in his classes dismissively about low-income populations, their thoughts reflective of late 19th Century social darwinism. But it got more personal.

“This one kid called me watermelon the first time I met him,” Blackwood said. At that point, he was at his wits end. He went back to his dorm and yelled, “took it all out” on a student in his dorm room. “I let out eight years of frustration on him all at once.”

“I’m always pissed off,” Blackwood said, taking his glasses off and wiping his eyes. “The thing is, he said, “you don’t know what’s going through somebody else’s head.”

Ng said that he could relate. Around two months ago, he remembered walking into an administrative office, dressed sharp, suit and tie, a plastic bag in his hand. The receptionist noticed the bag and asked him why it took him so long to get there. “She thought I was delivering food,” Ng said. “She just saw my face and the bag…I can’t tell you what that brought up.”

Blackwood hopes that stories like his and Ng’s create a culture of empathy and solidarity. “I want people to understand a distinct experiences of the people who come from different racial backgrounds are and that people need to be sensitive to that. I want people to acknowledge their privilege,” he said. “And I want for students of color, I want them to know that it’s perfectly okay for you to feel the way that you do, and that you have a place here. Because there are students around here who are going through university that have dealt with the same stuff you have.”

Blackwood and Ng agree that diverse representation is the next target for the university to hit. More than 40% of college students are non-white yet only 25% of full-time faculty fall into that same demographic.

At some point, the presentation finally got up and running, but the feeling was abrupt. Kormylo shuffled through her slides. Mental health facts, research and resources flashed and then disappeared.

Earlier, Ng had spoken about the hurt that diffuses across all minority students when they go to college. “My best hope for myself and for others is that we can relate to that hurt more.”