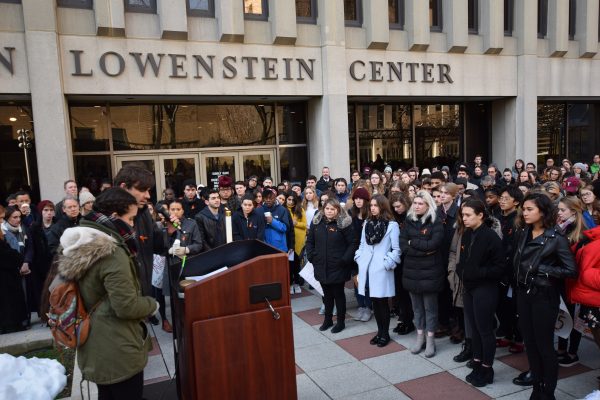 On the morning of March 14, Fordham students joined campuses across the nation as they participated in the ENOUGH National Student Walkout against gun violence on the one-month anniversary of the Parkland, Florida school shooting. Amid nationwide criticism concerning the demonstration’s ability to enact legislative change, Fordham devoted its 17-minute walkout that took place on the Lincoln Center campus plaza to reflection and remembrance in preparation for action-based campaigns to follow.

The walkout, organized nationally by EMPOWER and locally by United Student Government (USG), had recently come under scrutiny by various factions across the nation. Critics of the demonstration worried it distracted students from schoolwork and enabled a passive form of activism reliant on thoughts and prayers rather than action.

Fordham’s demonstration undeniably focused its energy on reflection, beginning the morning with a moment of silence at 10 a.m to remember the lives unfairly taken by gun violence, followed by a series of interfaith prayers led by faculty and students of Campus Ministry. A final ceremony had students ring a small bell 17 times, once for each life lost at Parkland, at which point the prayer came to a close, and the floor was opened for Fordham students to voice their thoughts on the day.

Speeches rehearsed by USG and Campus Ministry focused at length on the importance of prayer as part of the process towards action. “We need people who will think about those who are hurting and don’t stop thinking about them,”Erin Hoffman, associate director of Campus Ministry, said at the walkout. “Acknowledge obstacles that get in the way,…pray for the courage and endurance that we need to overcome them and then go and do it.”

Student discourse after the organized demonstration spoke more directly to the need for action and activism from individuals, including a powerful statement from Wayne Mackins, Fordham College Lincoln Center (FCLC) ’19, who reminded the audience that while demonstrators were “sitting here comfortable, standing in solidarity,” victims of gun violence were either dead or suffering from trauma. Mackins called students to action beyond the thoughts and prayers advocated by Fordham’s walkout, saying “if you’re tired of standing complacent, you can do whatever you want to…get on your Instagram, on your Facebook, your Twitter, your tumblr,  and say something.”

USG President Becky Song took to the podium to inform students that the conversation about gun violence would continue beyond the walkout. USG plans to organize events throughout the semester that will raise awareness about gun control and bring the Fordham community together, such as a visiting panel from Everytown for Gun Safety, a nation-wide alliance of citizens, politicians, and survivors of gun violence working to enact gun control change on a federal level. Furthermore, USG will table in the Lowenstein Building lobby with information on contacting representatives and legislators though a schoolwide letter-writing campaign.