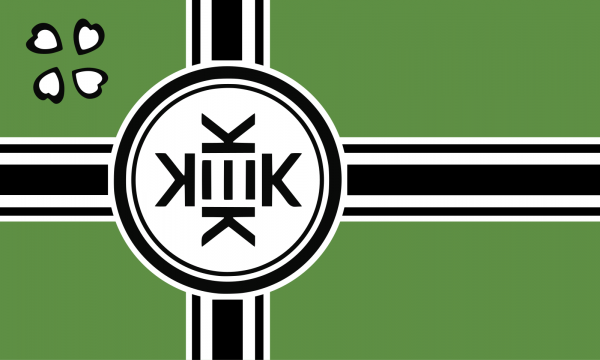 David Neiwart, author of Alt-America: the Rise of the Radical Right in the Age of Trump, explained that the kek flag is an edited version of a Nazi battle flag from 1930s Germany, saying “the design of the flag [is] a Nazi war flag with a kek symbol in the middle and painted green.” Some students in the photo have described the flag as a joke. (KEVIN MARKS VIA WIKIPEDIA)

A widely circulated photo of Fordham students brandishing a flag associated with white nationalism on a Rose Hill soccer field has generated a frenzy of discourse inside and outside the university. In the image, 10 Fordham students, most smiling, are seen holding what is known as a Kekistan flag on a soccer field with Keating Hall illuminated off in the distance. The students were part of a Fordham intramural soccer team and took the photograph after a game on April 3, 2017. A week later, one of the students posted the photo on Reddit and captioned it, “The Kekistani National Soccer Team made its International Debut Last Night.”

David Neiwert, author of “Alt-America: the Rise of the Radical Right in the Age of Trump,” explained that the kek flag is an edited version of a Nazi battle flag from 1930s Germany, saying “the design of the flag [is] a Nazi war flag with a kek symbol in the middle and painted green.” Some of the students in the photo have described the flag as a joke.

On Sunday March 4, the Fordham Ram published an article on the photo, in which the students’ identities were kept anonymous, their faces blurred in the photo “due to threats of legal action.” When asked for comment, the Ram declined to specify what legal action they faced. When the Observer contacted the students in the image, many of them requested that their names and faces not be published, citing concerns with future employment. One student’s parent wrote a letter to the Observer and a Fordham administrator saying they consulted with a lawyer and believed publishing the name and image of their child would be considered “defamatory, libelous and slanderous.”

On March 5, Fordham Students United (FSU), a coalition of students originally formed in 2015 to oppose racism on campus, posted the same photo on Facebook, unblurred. The post, which stated “The Fordham Ram can’t post their faces, but we will,” described the photo as an “homage to the 1930s Nazi flag.” The post also included a kek flag and the Nazi flag side by side. One FSU student leader, who spoke on a condition of anonymity, shared that they had posted the photo “to create a space for accountability.”

In less than 24 hours, the post garnered more than 1,000 reactions, 300 shares and almost 900 comments. Most of the comments trolled, mocked and criticized FSU’s post. Of 100 consecutive commenters, only two had a connection to Fordham on their public profile. Several commenters wrote hateful messages that employed anti-Semitic symbols, ableist slurs and white nationalist slogans, with one individual stating “i prefer the 1930s version to be honest.” Another commenter warned FSU, “Please please please do not overreact it is truly a meme to get a rouse out of you.” The FSU student said that the post had been shared with “alt right trolls” whose comments “downplay the horrors of Nazism.” On March 12, FSU held a protest to demand the administration “publicly denounce white supremacy on campus.”

Professors Carey Kasten and Carl Fischer, who are teaching a course titled “Fascism’s Aesthetics in the Hispanic World” this semester, held a brief discussion on the image at the end of class in late February before photo widely circulated the internet. Fischer felt that they “needed to address it,” adding that the incident “really brings home what we’ve been talking about in class. It shows the urgency of going back to these moments in history, realizing that this isn’t a far away thing.”

The Jewish Student Organization at Lincoln Center said in a statement to The Observer that the photo was “disturbing, anti-Semitic and frankly scary for the Jewish community.”

In an interview with the Observer, a former executive board member of Rose Hill’s College Republicans club pictured in the photo made the case that “if you look into the history of the flag, you’ll see that it’s a joke, it’s not meant to be offensive.” He confirmed that he had posted the image and caption on reddit.

The student, who originally gave a full interview with the Observer and then asked to have his name withheld from publication, added that the photo was not affiliated with the College Republicans. He and another student, a current e-board member of the club, are among the individuals display the flag in the photo.

According to Neiwert, attendees have brought the flag to every “free speech” and “white nationalist” rally he has studied in the past year. It is the flag of the satirical nation of Kekistan, originally created by Carl Benjamin. Benjamin is a Youtuber who is popular on alt-right online forums and has encouraged guests on his videos to say the 14 Words, a white supremacist slogan: “We must secure the existence of our people and a future for white children.”

The student who posted the photo on Reddit described Benjamin as liberal,  insisting that “the Kekistan flag is a parody flag,” adding “I can put the swastika over the gay and lesbian flag, the LGBT rainbow flag, does that make it a racist flag? No, it’s stupid.”

On Reddit, one user commented on the team photo, “This goes against the very ethics of kekistan! Those women are outside of the kitchen! Infidels!”

The same Fordham student responded, “It’s hard to find kekistanis on a college campus. We had to make do.”

Another student who is pictured in the photo, said that found those comments “terrible.” She added that “if people think it’s a joke, they should understand that it’s not something to joke about.”

The student, along with several others pictured in the photograph, told the Observer that they “had no idea what a kek flag was” until they were asked for comment.

A Rose Hill senior who is in the picture said he thought that “most of the people in the photo don’t even know what the flag is.” He said. “We weren’t trying to make a political statement or anything. The kekistan flag represents, for lack of a better word, annoyance with outrage PC [politically correct] culture. We had it there as a joke.”

In an email to the Observer, another student described the flag as an “outdated meme.” While the Ram reported that nine out of the ten pictured students “were unaware of what the flag represented,” at least three students told the Observer that they understood the flag as a joke.

This is not the first time that white nationalist symbols have been propagated at Fordham: five swastikas as well as two references to white supremacy have been reported to Public Safety since fall 2015. In November 2016, shortly after the presidential election, students found a white supremacist flyer at Rose Hill’s Dealy Hall.

On Feb. 27, Dean Rodgers provided a statement to the Observer through FCLC Dean of Students Keith Eldredge after multiple requests for comment, stating that “Fordham University neither condones nor allows hate speech. After researching the background, symbolism and context of the image, the University took steps to address the situation with the students involved.”