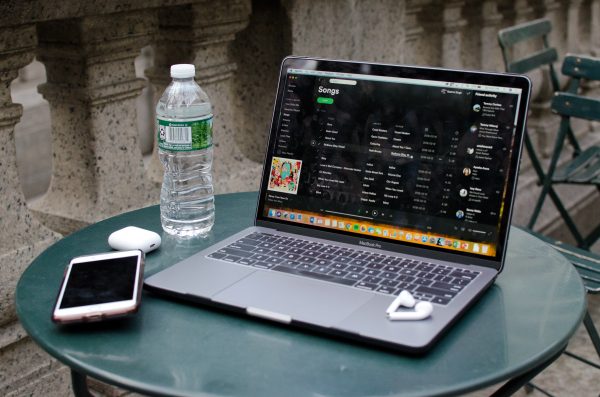 Spotify pays artists about $0.0039 every time one of their songs is streamed on its platform. (RASHMI SINGH/THE OBSERVER)

I am an artist. Like billions of other people around the globe, I derive great pleasure from expressing my deepest and most honest thoughts in a creative form. Collectively, I and the people like me refer to this creative expression as “art.” You have probably experienced lots of art, especially as a student on a liberal arts college campus and a New York City regular. But how often do you support the artists whose art you consume?

In the age of the internet, it is safe to say that many of us consume art—namely, music—digitally. Music is readily available on sites like YouTube, Spotify, Pandora and Apple Music. These services do not require per-song or per-album payment from users like us. So how do creators get paid for their content? The answer is that they really don’t.

Any site, service or physical location that hosts music has to pay money to what is known as a performing rights organization (PRO). PROs are responsible for paying artists when their music is played on the radio, at a club and, yes, on a streaming service like YouTube. In addition, the streaming service must pay the artist every time their music is played on that streaming platform. This sounds like a fair deal, but a problem arises when considering exactly how much the artist makes from having their music played.

The rates that PROs and streaming services pay artists are dismal, to say the least. SoundExchange, the most widely used digital PRO, pays its artists $0.0023 per digital performance. This covers all subscription-based services, including SiriusXM, Apple Music, Music Choice and any other streaming service you can imagine. Streaming services are not far off: Spotify, the owner of the largest share in the digital music streaming market by far, pays artists $0.0039 per stream. YouTube comes in with the lowest payout rate, clocking in at $0.0007 per play.

To put these numbers into perspective, let’s apply them to a real artist: the local New York pop punk group State Champs. According to their #2017Wrapped—a viral marketing campaign Spotify conducted at the end of last year—fans listened to 2 million hours of State Champs’ music in 2017. Liberally estimating that each of their songs is about three minutes long, that means that State Champs songs were played about 666,667 times on Spotify. If they got paid $0.0039 per play, the band made a grand total of $2,600 from Spotify plays last year. With that money, they will have to pay five band members, not to mention their label will take a cut. Other band-related expenses include tours, merchandise, advertising, studio time, a producer, a manager, a booking agent and more. Of course, many of these costs are often covered by the band’s record label, but the more of that stuff the label does, the less money the band is making.

So now that you know that your favorite artists are making close to nothing, what can you do? The answer is simple: buy your music. Yes, you can still buy concert tickets and merchandise; in fact, odds are that your favorite artists make most of their money through touring. But you would be contributing a substantially higher amount of monetary support to their art than you are now by streaming their songs on the internet. If you listened to 100 hours of State Champs’ music on Spotify last year, you would have earned them $0.13—again, to be split amongst five artists and a label. But if you bought their two (amazing) full-length albums instead, you would have given them approximately $20. Even though this money is still split amongst a lot of entities, it is 154 times what you otherwise would have given them.

I know that the general response to this argument is that the music consumer cannot afford the music. This is a fair argument. As a college student, you might be working a low- or even minimum-wage job and that might be your only stable source of income. But for most of us, it is not. I acknowledge my privilege as someone whose parent can afford an extravagant (read: “expensive”) education at a prestigious university. You should too. And if you can afford that five- to six-dollar frappuccino at Starbucks, you can afford to give up two of those overpriced cups of sugar water to your favorite artist in exchange for an album. As silly as it sounds to say out loud, I think we can all agree that emotionally-charged, meaningful art is more valuable than a cup of unnecessarily expensive coffee.

Morality is a big part of why buying music is important. Most musicians are creating art that means a lot to them. They pour their hearts out into their lyrics, spend countless hours writing and perfecting the instrumentation and spend unimaginable amounts of money on studio time and a good audio engineer. Then they promote the finished product hoping that people will consume their art and respect it enough to support it monetarily. The disappointment an artist feels upon discovering that streaming services have taken advantage of their music is ineffable. It kills art and, more importantly, tears down an artist’s confidence and self-respect. What’s more, many musicians create art for a living, and streaming makes it close to impossible to be able to live comfortably. Buying music would alleviate this stress, quite literally, exponentially: the more people buy music, the higher the artist’s profit margin becomes.

With that, I implore you: buy your music. Give artists your money. Dedicate a small portion of your monthly budget to supporting the art they create; not the merch or the concert, but the art itself. The art is worth your support and your respect.

I am an artist. I pour my heart out onto the pages of my notebooks and the cracks in my vocal cords to be able to create and share my passion with the world. And my art deserves your support and your respect.