We the People Demand Equal Rights 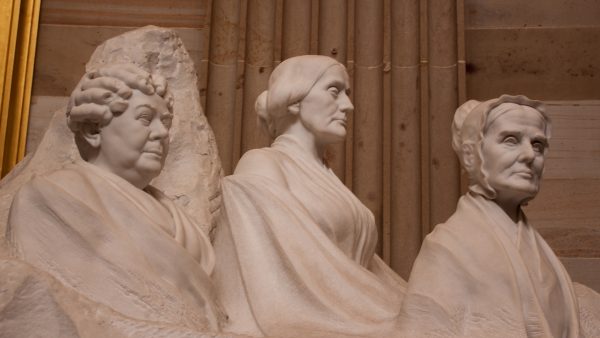 Why should we the people of the United States be treated equally in the eye of the law? Is it because we are citizens contributing to society? Is it simply because we are human? Why do we deserve equality? We are so privileged to enjoy the rights that we are granted, but we fail to recognize that they aren’t set in stone; in fact, they are not even established in the Constitution (unless you are a straight, white, cisgender male, of course). The notion of inalienable rights came to fruition in the “Western” eurocentric world during the 18th century, but these privileges were not applicable to women. Women were expected to stay in their place.

In the 20th century, women in the United States of America began fighting for their social and political rights. They were afforded the right to vote like men, but that did not equate them to men in the eyes of the law and society — they still were regarded as second-class citizens when it came to job opportunities and salary negotiations, as it was argued they had other domestic “roles” to maintain.

In 1923, the nephew of Susan B. Anthony brought to Congress the Equal Rights Amendment (ERA), authored by Alice Paul. This amendment would have essentially made systematic, gender-oriented workplace discrimination illegal and ensured equal opportunity in job pursuance. But these ideas seemed too overwhelming at the time, so the amendment was kept aside. It was mentioned in congressional sessions every year after, but it was not until 1970 when Martha Griffiths finally brought the amendment back into both congressional and national conversation. The House and Senate both passed it, but the ERA fell just three state legislatures short of ratification.

Section 1 of the Equal Rights Amendment, formerly known as the Lucretia Mott Amendment, states that “equality of rights under the law shall not be denied or abridged by the United States or by any state on account of sex.” The amendment would secure a woman’s status in the eyes of the law as an equal to her male counterpart, which could eventually transform into complete gender parity. Section 2 grants Congress the authority to create laws, based on the provisions of the Amendment, to facilitate the institutional equality between sexes.

As the ERA movement grew in popularity amongst women and men in the United States, it met many rivals. One was Phyllis Schlafly, a well-educated lawyer who created the STOP ERA countermovement— “STOP” was an acronym for “Stop Taking Our Privileges.” Many accredit the failure of the amendment to her movement because of the “turncoat voting” it induced amongst women. She emphasized the comfortability of life in America for women as the primary homemakers of the family. Schlafly denounced the ERA and mainly targeted women to join her movement, although there was no shortage of men joining the campaign. Also in opposition were businesses, who feared having to pay their female employees more, and religious groups, who wanted to prevent a potential victory for reproductive rights and people in the LGBTQ community.

In the 1980s, President Ronald Reagan actively spoke against the ERA as well. Reagan and Vice President George H. W. Bush represented “family values” to their supporters, a concept highly valued by white Americans of the time. An extension of Phyllis Schlafly’s philosophy was celebrated; women were identified as the primary caretakers of the family, and men were the breadwinners supporting the family; however, marginalized groups once again felt unrepresented by this “American” way of life.

Since the condemnation of the ERA by Reagan, the conversation regarding the necessity for the ERA has re-emerged, both in politics and in greater American society. In 2011, Senator Robert Menendez and Representative Carolyn Maloney pushed to bring it back when Justice Antonin Scalia stated that the 14th Amendment did not prohibit gender discrimination. In 2015, figures such as Meryl Streep encouraged the passing of the ERA in order to bridge the wage gap. In 2017, the election of Donald Trump threatened the agency of many women and other marginalized groups. President Donald Trump blatantly endorsed xenophobia, attacked Dreamers, condemned reproductive rights by his staunch denouncement of Planned Parenthood and maintained a victim-blaming complex in regards to gender-based violence. It was realized that social standing for marginalized groups was always in flux and largely dependent on the reigning political party’s values.

Ruth Bader Ginsburg emphasized that we were able to accomplish almost all that we could have thus far with the Supreme Court Justices’ interpretations of the 14th Amendment and created legislation accordingly, but legislation itself is susceptible to being changed or repealed. The Equal Protection Clause in the 14th Amendment does not explicitly state the equality between men and women. Another thing to note is the intent of the Founding Fathers; women’s rights, or even rights for people of color, were never thought of when the Constitution was created, which is why it is so necessary that we implement an amendment to represent the majority of the population. In order to provide agency to these marginalized groups, it is important for them to be assured that no matter what political arena the country is in, their rights could not be disputed, rather they would be guaranteed because the equality stature between the sexes would be established as a “fundamental tenet of society.”

The ERA is not only about equality between the sexes, but also equality within them as well. The fourth wave of feminism prides itself on intersectionality—it is understood that women are not seen as equal to other women. For example, the wage gap is not only a factor between men and women, but also between women of color and white women. Asian women and white women earn higher average hourly wages than black and Hispanic women and even black and Hispanic men. It is easy to say that the groups making lower hourly wages should try to get better, well-paying jobs, but many systematic impediments and social constraints continue to shackle them to lower-paying positions. The implementation of the ERA could protect these groups and help give them the equal opportunity they deserve.

Without the “supreme Law of the Land” establishing equal rights for over half of the population, there is no way to fully protect women and other marginalized groups. Decisions made about women are still run by a male-majority Congress that is now also a conservative majority. Of course, the ERA will not act as a remedy for every gender-related issue, but it will safeguard our rights when they are being disputed.

Although the embers of the Equal Rights Amendment may have been extinguished since the 1970s, they can and must be reignited. Much has changed since the era of “family values,” and the paradigm of the “American family” has been greatly altered due to the social progress we have made since the late 20th century. Women have roles in society that extend beyond the household. They have integrated into society as equal contributors; however, they still lack any constitutional clause that explicitly indicates the equality between the sexes. The legislation that currently protects women from gender discrimination can easily be repealed or changed, so it is vital that the “supreme law of the land” upholds equality for all. It’s time to bring back the ERA and grant women their lawful equal status to men in the eyes of the federal government. Our grandmothers and mothers paved the road to equality for us; it is our duty to level it once and for all.