A Fordham Professor’s Odyssey of Empowerment 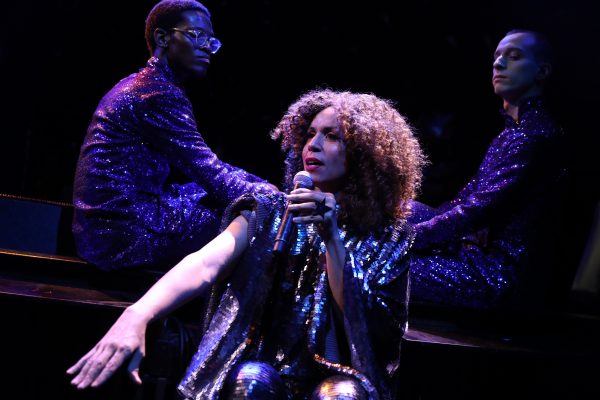 Self-proclaimed as “artist-driven and radically inclusive,” the Public Theater has long been known for its unique array of performance pieces that are highly influenced by contemporary social issues. On Feb. 25, one of its sub-venues, Joe’s Pub, opened the curtains on its newest cultural celebration: “Black Light”. The piece is headlined by Jomama Jones, the alter ego of Daniel Alexander Jones, theatre professor and head of the playwriting program at Fordham College at Lincoln Center (FCLC). The show, created by Jones, is comprised of Jomama’s childhood anecdotes interspersed with original songs, which together are a joyous blend of entertainment and empowerment. Jones explores themes of identity, self-expression and growth, while actively interacting with the audience, inviting them to do the same. The Observer caught up with Jones to discuss  his inspiration as an artist and what he plans on taking from the show back to the classroom from “Black Light”.

The Observer: For someone who hasn’t seen the show and is unfamiliar with your act, how would you describe it?

Daniel Alexander Jones: Well, I think there are a couple things I’d say. The first is, it is my performance persona, Jomama Jones, and I feel like… in the piece, we come to see a kind of high priestess. She’s a very open, fun and entertaining figure, but I think she has a mission to try to connect people and open people’s hearts. When you come to the show, you’re really coming to an audience with this energy that is definitely going to entertain you but is also going to ask you some really provocative questions. The second thing I’d say is that I’m always really interested in form, so this is a piece that deliberately mixes a concert with theatre and a kind of conversation. My hope is people will come and expect the unexpected, expect to go on a little bit of an adventure.

TO: What was the process of creating “Black Light?” Where did you get your inspiration and when did you begin working on it?

DAJ: We started about two years ago and the project was commissioned by the Public [Theater], by Joe’s Pub. I started with songs—I had written a bunch of songs with my collaborators, about a number of themes that really were important to me. We then began to ask questions of the songs, and then questions about the world we were in. It was right around the beginning of the presidential election process, and the deep discord in our country was surfacing in such a pointed way. I and my collaborators all knew that we had to engage our own discomfort —with that discord— through the show. We first performed it right after the election, about a year ago. Over the last year, it’s grown and changed a lot because our country has grown and changed a lot, and revealed a lot about our own crisis. As Jomama says in the show, “No matter where you find yourselves politically, I think we can all agree we’re in a real crisis in our country,” with regard to our civic dialogue. So I’m hopeful that the show will be a place where people can come and, rather than be lectured to, be invited to be vulnerable around what they feel about that topic.

TO: What was that like, performing right after the election? Where did you first perform the show?

DAJ: We did it at Joe’s Pub as part of the Under the Radar Festival, but we also did it in St. Paul [MN] at Penumbra Theatre, which is one of the oldest black theaters in the United States. That was a particularly powerful thing, to do it in the Midwest and to do it in a community that’s very politically and culturally open and charged.

TO: I bet it must have been. What was your favorite part of the process as a whole and about performing it now?

DAJ: One hundred percent, my favorite part is the experience of working with my collaborators—this band, vocalists, and the people who came on board to work with me on developing the material. It’s been like being in a huge family, so much love and so much skill—I mean, as you heard, they’re just amazing musicians.

TO: Have you worked with them before?

DAJ: Some of them I’ve worked with before, but several of them are new to this process and new to working with me. Within New York City, within the arts community, you have these constellations of people who know people, and I’ve been very trusting that the right people will come to the project. For example, one of my vocalists and our amazing bassist came highly recommended by people who I love, not only because of their skill as artists, but because they were really open-hearted people. I love that built into this show, it asks you as an audience member to trust in the unknown. In the process, I, as an artist, had to trust in the unknown and work with new people. I loved the process of working with them all. And I think the part I love about performing it is that every night, the room changes because every audience is so different from one another. I love that I never know—we never know—what to expect, and that, in very subtle ways, the show has to be different every night to meet the room. That makes me excited as a performer, always, because you can never be on autopilot. You come in with real energy.

TO: How has Jomama evolved since her inception in the ’90s and since her last time at the Pub?

DAJ: I think she’s become a very wise person who is very confident in her own understanding of things. And I think when she first came out, she was a little bit more of a classic diva. And since the last time, I think there’s been a real shift toward understanding that one of the responsibilities she has is to try and open up that space I was talking about earlier, where people can really be present with one another, even if they have deep political differences with one another. It feels like one of my missions on the planet is to do that work.

TO: What makes this show different from Jomama’s last show at the Pub, and what makes it special to you?

DAJ: Personally, I’ve had a lot of deep feelings of loss and grief around what’s happened in our country, and I wanted to do something about it. Being able to do this work right now has helped move that energy in me, it’s given me a sense of purpose and an action to take. I feel like that’s mirrored in the country right now—so many people are finding a way to use their voice and take action to try and bring our country together.

TO: I’m going to turn this toward Fordham now—are there any experiences throughout your career at Fordham that have influenced your body of work, this show or your persona in general?

DAJ: One hundred percent. One of the main reasons I came to Fordham was that I fell in love with the ethos of the theatre department and with the students and my colleagues. One of the things that’s really influenced me is that they’re so brave, so open-hearted and so committed to trying to use art to do something positive in the world, and that’s kept me really honest. I had the great pleasure of having some of my students come down to have class at the Public because I was in technical rehearsals and I said, there’s no difference to me between working on this piece of art and being in a classroom because it’s all about trying to engage a really brave and bold conversation. I feel fortunate to be at Fordham where those values are upheld inside our department.

TO: What have you learned from creating this show that you would pass on to your students?

DAJ: One big thing is that it’s very important to trust that, when you’re making something new, it’s going to look and feel like itself. If you’re honest, it’s not going to look and feel like anything that’s existed before, even if it may be similar in genre. You have to be able to listen to what’s specific about what you are doing. Sometimes you have to fight for it and sometimes you’re fortunate enough to be in an institution that will support it, but you have to make sure it sounds, moves and feels like you. I’m really grateful to the Public for giving me this space to do that. I feel very proud of [“Black Light”].

TO: One last question: although this project isn’t quite over yet, do you have any idea what’s next for you and Jomama and where you might go from here?

DAJ: I’m about to work on recording a new album over the course of the summer, so hopefully we’ll be done and able to share some of that music by the year’s end!

TO: Like another performance or are you aiming for an album?

DAJ: Probably all of the above!

“Black Light” will be at Joe’s Pub at the Public Theater until March 25. Don’t miss it!