Fordham Students To Rally for Walkout Against Gun Violence 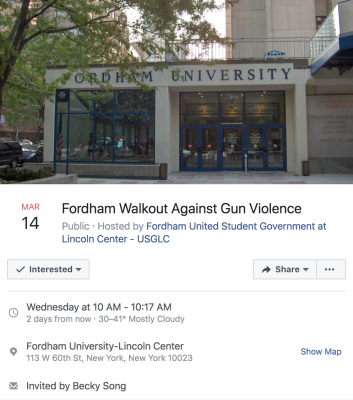 On March 14 at 10 a.m., Fordham Lincoln Center students will join over 2,000 campuses around the world in a walkout protest against gun violence. The demonstration, officially titled the “ENOUGH National School Walkout,” will honor the victims of the Parkland, Florida shooting on its one-month anniversary and campaign for action towards gun control.

EMPOWER, the organization behind the walkout, urged campuses to use their 17 minutes of demonstration time, one minute for each life lost at Parkland, productively. Remembrance of victims and actions towards gun control, such as voter registration, are encouraged.

Fordham’s walkout is supported by the Fordham administration but is organized by United Student Governments at both Rose Hill (USGRH) and Lincoln Center, continuing the movement’s orientation on student-led protest. United Student Government Lincoln Center (USGLC) President Becky Song, Fordham College Lincoln Center (FCLC) ’18, spoke on the importance of the movement’s unity: “Even though it’s a tragic thing that has inspired people to come together, I think it’s been a catalyst for people to look at our representatives, hold them accountable and take action.”

The walkout itself will begin preparation at 9:30 a.m. on the outdoor plaza or the cafeteria atrium in case of rain. 10 a.m will commence with a moment of silence for all lives lost to gun violence, followed by an interfaith prayer and 17 bell tolls for each of the lives lost during the Parkland shooting. Tabling in Lowenstein will continue throughout the week, where students may find information on gun violence and how to mail Speaker of the House Paul Ryan, District Representative Jerry Nadler, and other legislators for action on gun reform.

Both campus faculty and students support the walkout and similar protests. Song called attention to a Feb. 26 email from Father McShane that curtailing gun violence was not only a “civic responsibility,” but a “mandate” dictated by Jesuit teachings “on the sanctity of life.” The same email ensured students they would face no sanctions for “peaceful and respectful demonstration against gun violence on or off campus.” Father McShane continued to rally students, asking students at mass on Sunday to “please walk out” and contribute to the letter-writing campaign.

USGs of both campuses encourage more than just their undergraduate constituents to participate in the walkout; they hope Fordham Law, the School of Social Service and other campus organizations such as Campus Ministry, Active Minds and the Dorothy Day center engage in the movement as well.

“A mass movement like that provides a platform on which to build further steps towards action,” Emma Quinn, FCLC ’20 said, who views the walkout as a foundation for further change. “As students, we can use this to rally towards policy goals that will make a difference.”

The protest was planned by members of Women’s March Youth EMPOWER, an initiative organized after the 2017 Women’s March to equip student leaders with tools to voice their opinion. ENOUGH’s nation-wide directive team consists of 14 students aged 16-23 who have used social media to spread information and gain support for their cause. The walkout itself takes its name from the #enough movement on Twitter, which generates dialogue on gun legislation through the collection of vignettes concerning the consequences of gun violence.

USG hopes to generate further dialogue with the walkout by hosting a letter-writing campaign in which Fordham students can call on their representatives and legislators to enforce gun control. Additional plans include a visiting panel from Everytown for Gun Safety, a nation-wide alliance of citizens, politicians, and survivors of gun violence working to enact gun control change on a federal level.

“At Fordham, we can show that there is power in thought and prayer combined with action,”Song said. “The conversation doesn’t end after the grief has subsided.”