A Selfie, a Troll and the Issues That Matter to Al Sharpton 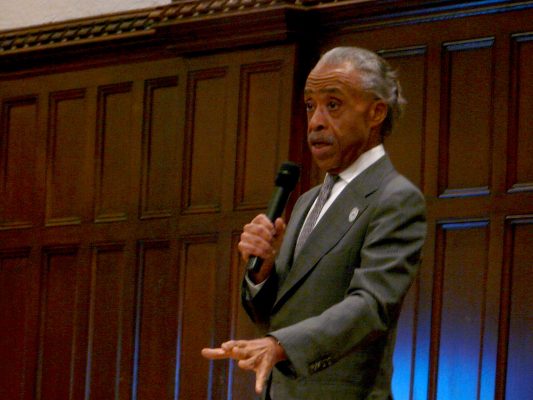 Rev. Al Sharpton spoke on Feb. 26 in Keating Hall at an event hosted by the Fordham Libertarians. (COLIN SHEELEY/THE OBSERVER)

It was as strange as the Facebook event made it sound. “In pursuit of broadening political dialogue, we worked to bring the dirty trickster and political hatchet man Roger Stone to Fordham in October,” the event details noted. “In the spirit of fairness, balance, and continuing discussion, we at Fordham Libertarians are proud to present, together with Fordham Political Review, the honorable Reverend Al Sharpton!”

As a whole, the Feb. 26 “Evening with Al Sharpton” was punctuated by trolling comments during the Q&A session and capped off by an audience-wide pseudo selfie, yet nonetheless touched on the national and local issues of gun violence, gerrymandering and race.

Taking the stage, the Rev. Al Sharpton made his agenda clear. “I want to focus on where we are right now in the country,” he said. “I think that the gun debate that is going on right now is very important.” Sharpton, who at 13 was appointed youth director of  Martin Luther King Jr.’s Operation Breadbasket, has sung the praises of “deliberate” organizing for the entirety of his 50 year political career. He said that finally, the survivors and activists of the Parkland, Florida shooting “are focusing in the right place.”

What really matters, Sharpton argued is the legislature, is Congress. “Because,” he said “if you don’t change laws, then your moment will not turn into a movement.”

That movement, or rather the “core problem” is the public accessibility of assault weapons like AR-15. On stage as on television, Sharpton called for the complete ban of the semi-automatic rifle, absolute, regulative poison to the ears of conventional Libertarians.

“Anything short of addressing the basic core problem to me is going to only lead us to be back here again as a country,” he said.

Then he moved to another problem–“the other part” as it were: gerrymandering. As was the case with assault weapons, Sharpton urged that “impediments to voting rights and having free voting districts” must be erased.

“To carve out districts that would almost guarantee that a certain party would have a certain amount of congressional seats,” he said, “it is antithetical to the whole concept of an American democracy that represents the population.” The reverend was in rapid-fire mode.

He took aim at Fordham students, presenting a paradox. “You’re in a city that is two thirds Black and Latino,” Sharpton said. Yet, “if you go to places of high learning…you would not know that you were in a city two thirds Black and Latino.” The reverend contended that the issues prevalent in marginalized communities such as stop-and-frisk and education disparity are not pressing or obvious to college students, but they should be.

Every generation has had to manage these issues, Sharpton pointed out. “The question is are we going to raise and rise up to answer those challenges.”

Students as it happened did rise up from their seats taking their places in line along the auditorium’s aisles as the event transitioned to a Q&A session. Around a dozen spoke, pressing Sharpton for his opinion on topics ranging from Kentucky Senator Rand Paul to marijuana to the incarcerated rapper Meek Mill.

One student brought the accusations raised in a Newsmax article that charged Sharpton with exploiting a police shooting of an African American man in 2014 stating the extent of Sharpton’s gaze “is money and political gain.”

“I think you should get a better source,” Sharpton replied, referencing the unnamed aunt who was quoted in the article. He pointed to the victim’s girlfriend who helped lead a 2014 march on Washington as evidence of his sincerity.

“As a student at Fordham, I’m shocked you don’t have better sources,” he said, adding “Do you have a question?” and then a pause. “I didn’t think so.”

Finishing his remarks, Sharpton thanked the fifty-some students who attended and left, but not before taking a selfie on stage with the audience who was too numbered for him to hold the phone himself.