It’s Never Been About Bathrooms 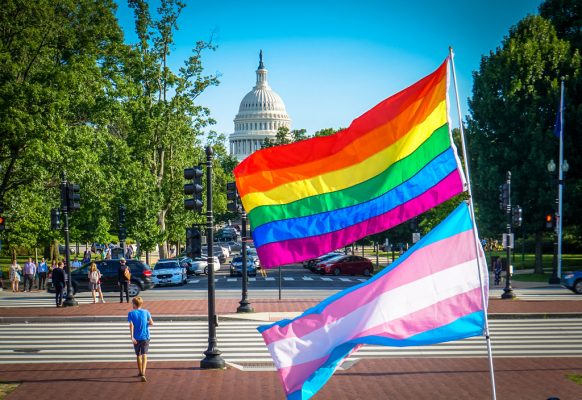 The fight for identity celebration concerns us all. (TED EYTAN VIA FLICKR)

Until two years ago, transgender and gender non-conforming (trans/gnc) identities were inextricably linked in my mind to bathrooms, locker rooms and other sex-segregated spaces. This is because, like most people, the first interaction I had with a trans person was not in conversation—not in communion—but rather mediated by the news. Make no mistake: this was a distorted mediation, whereby the output on the 5 o’clock news does not begin to reflect the complexity of opinion and experience in the trans/gnc community. While grossly incomplete, this slim cross-section of representation caught America’s attention.

According to the American media, 2015 was the year of transgender celebrity Caitlyn Jenner. 2016 was the year of House Bill 2 (or “the bathroom bill” as some called it) and of the number of trans/gnc-identifying Americans leaping to 1.4 million, a doubling in just five years. 2017 was the deadliest year on record for trans women and the year when New York City mandated the transformation of all single-stall restrooms into explicitly gender-inclusive restrooms.

Like most institutions of higher education, Fordham Lincoln Center had a parallel spike in dialogue about gender inclusivity on campus, with the creation of the gender advocacy coalition The Positive in 2014. Unlike comparable New York and Jesuit institutions (such as Columbia, NYU and the University of San Francisco), Fordham did not deliver on the demands of trans/gnc activists and the wider student body for inclusive policy change.

What I failed to recognize amid the myriad of headlines is that this fight has never been about bathrooms. It is about recognition, visibility and celebration. I would be very surprised if any trans/gnc Ram feels fully recognized by the university, wakes up undeniably safe in the expression of their gender and struts down maroon halls knowing their existence is a celebration: a march to which every Vice President on campus beats a drum. My Fordham education should teach me these three truths. As of today, it does not.

I want to focus on the third demand, because it is the required reality most alien to Fordham’s administration and to me. Queer activist Leslie Feinberg wrote in “Trans Liberation: Beyond Pink or Blue” that “Gender is the poetry each of us makes out of the language we are taught.” But what if you are not taught? What if no one taught you that you exist, much less that your life deserves to be put into stanzas? What if no one taught you that the spectrum of gender is an unprecedented opportunity for liberating linguistic creativity? A creativity that just might allow our community to thrive when the ability to survive is often too much to ask. No one taught me.

The use of gender-neutral pronouns such as “they,” “ze” and “em” have become more common in the United States as a mechanism of self-identification outside of the confines of “he” and “she.” In the article “Stick Figures and Little Bits: Toward a Nonbinary Pedagogy,” A. Finn Enke maintains that spoken and written language are symbols that construct a world order, where the gendering of persons in binary terms only serves to “create, teach and enforce” the existence of only two genders. Thus, when someone claims gender-neutral pronouns, they are linguistically building a world in which they can exist. So, when one assumes another person’s gender or does not care enough to call a person by their preferred pronouns, one effectively excludes them from a reality in which they can exist and robs them of their right to self-identify.

Language therefore acts as a gatekeeper, permitting or denying entry into a conversation, a classroom, a staff meeting, a dorm room, a healthcare facility or a bathroom. In the case of sex-segregated restrooms, the signage (i.e. the language) is a set of active symbols that work to enforce an exclusionary reality that is a fallacy.

Enke posits that because we as a society “have been socialized in structures of sexist, racist and classist hierarchies, identity-laden pronouns (‘he,’ ‘she,’ etc.) make it impossible for people to perceive the third person openly and also interferes with people’s ability to represent themselves in their own terms.” The erasure of adequate and creative language can therefore prohibit the possibility of self-conception as a trans/gnc individual. Do you see the tragedy in shrinking yourself down to cram into one of two boxes when in actuality you far bigger than you know? Do you see the tragedy in never realizing you could live that fully?

Let’s bring this back to Fordham. The vast majority of Lincoln Center students support the creation of explicitly gender-inclusive restroom signage according to a 2014 survey conducted by Chris Hennessy, Fordham College at Lincoln Center (FCLC) ’15. So where are you? Why are the people that slide along the scale always responsible for carving out a way to a victory? Because the trans/gnc-identifying community has everything to lose.

I call specifically on the Women, Gender, and Sexuality Studies students, who critique the gender binary on the daily, to extend their analysis to all classrooms—all spaces even. Theory is worthless if you do not realize the flesh and blood that is at stake. Recognize the power of your education.

Furthermore, how many of you cis readers who watch RuPaul demand that your teachers ask and remember the pronouns of every person in the room? Support and solidarity work both ways—If you are able to consume our culture, you can assuredly show up for it.

Recognition, visibility and celebration are what we ask, and we are not the only community on campus to do so. To the trans/gnc-identifying community members reading this, please continue to beautify these halls with your strut and swagger, your walk and talk and the way you continue to breathe.