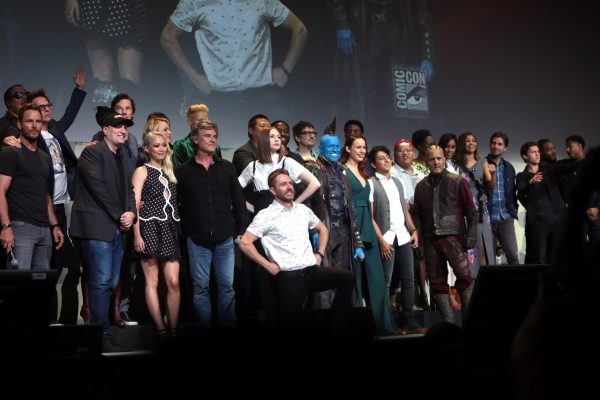 The Marvel Universe films have garnered much success over recent years. (COURTESY OF MARVEL STUDIOS)

For nearly 10 years, Marvel Studios has handed fans some of the most successful superhero movies to date. Each film in the famed Marvel Cinematic Universe (MCU) has garnered massive box office success, producing a total of 18 feature films based on their classic heroes which have all maintained a #1 spot in the box office on opening week and raked in billions of dollars. But what about Marvel movies keeps fans hooked for more content? The characters, yes. The action scenes, yes. But the real secret is in the tone.  The franchise that originally produced more serious pieces of cinema has now devised the perfect balance between comedy and seriousness for each film, even as the subject matter grows darker. The MCU knows how to retain a fanbase, and it all seems to be in the tone.

It began in 2008 with the release of Jon Favreau’s “Iron Man,” starring Robert Downey Jr. as the infamous genius, playboy billionaire philanthropist Tony Stark. The film is dark for an origin story—Tony, the CEO of his weapons company Stark Industries, gets captured while testing bombs in Afghanistan. His several months in captivity make him realize that his weapons are helping the enemy more than U.S. troops, urging him to become Iron Man to set things right again. Tony has a dry, sarcastic humor to him that can make anyone chuckle, and that sense of humor combined with the epic battle sequences in his Iron Man suit easily made the movie a hit. But overall, it was a story of war—realizing the consequences of violence not only on the battlefield but also off of it.

The success of “Iron Man” led Marvel to then release both Thor and Captain America origin stories, each following the trend of a serious tone with wry humor in spots. While fictional, “Captain America: The First Avenger” tackles the all-too-real concept of Nazism. The plot of “Thor,” on the other hand, had more room for humor. Thor is forced to adjust to mortal life after being banished from his realm, Asgard. However, a movie that could have been more lighthearted instead relies on dramatic scenes to propel its story. With each movie proving to be a hit, Marvel found the secret to their success—or so they thought.

And the culmination of the first phase of films? “The Avengers” (2012), a gargantuan project uniting Marvel’s best heroes. The plot is nothing to laugh at—Thor’s brother, Loki, creates an army to take over the world—but arguably, some of the greatest scenes in the movie are the comedic ones. No fan will ever forget the Hulk’s witty “puny god” after pounding Loki to a pulp, or the infamous Schwarma scene after the credits. “The Avengers” provides the perfect balance of seriousness and comedy. However, Marvel chose to go in a different direction with its content, making their next phase of films a step darker and changing their tone along with it.

The sequel series including “Captain America: Winter Soldier,” “Thor: the Dark World,” “Iron Man 3”, and “Avengers: Age of Ultron” all lessen their comedic charm and focus more on stark, dramatic subject matter. The serious attack in “The Avengers” causes each hero to question his role in the world, and we see some major character development occur as a result. In each film, new evils arise that test the heroes to their very limits. Relationships are strained between both friends and foes, and we see more darkness afflicting the characters physically and emotionally. Suddenly, the heroes are not perfect. They are shown as flawed figures, and this realization opens the door for more serious subject matter to enter the Marvel Universe. While reducing comedy, perhaps this transition into darkness is what the franchise needed to propel itself further.

But everything changed when “Guardians of the Galaxy” (2014) released—Marvel’s not so secret weapon. After plunging itself so far into darkness, the comedic action film starring Chris Pratt revived the cinematic universe completely. “Guardians” is a breath of fresh air, with a hodgepodge of oddball characters like Chris Pratt’s “Star-Lord” and a talking racoon named Rocket (Bradley Cooper) who are forced to work together as a team to save the galaxy. What seemed like a would-be failure instead became a film that excellently combines comedy with an action-packed plotline. And with a 91 percent on Rotten Tomatoes, viewers agreed. It was a hit.

And from “Guardians” on, Marvel found its balance. Each new release following the 2014 film, while still plunging into darker subject matter, seamlessly incorporates just the right amount of comedy to keep audiences entertained. “Ant Man” capitalizes on the humor of shrinking to the size of an insect. “Captain America: Civil War,” while focusing on a severe rift between heroes, still utilizes witty humor in places to keep the film from getting too heavy. And the recent release of “Thor: Ragnarok” revitalizes the hero’s franchise with gut-busting humor—the kind that never gets old.

But, it is MCU’s latest release “Black Panther” that builds the tone for the next movies to come. The film combines incredible action sequences with a deep plotline as T’Challa (Chadwick Boseman) fights to protect both his country of Wakanda and his reign as king from falling into the wrong hands. In addition, the serious plotline is heightened by addressing the subject of racial injustices facing black people today. The movie primarily highlights the ingenuity of T’Challa and his Wakandian people, and the more playful bits of the film were times when you get to see the true friendship between characters and understand the culture of the African nation as a whole. “Black Panther’s” excellent balance between seriousness and lightheartedness displays just how far the MCU has come in crafting tones that truly compliment the plot of a movie and keep audiences enthralled.

By inserting just the right amount of humor into the most serious and action-packed plots, Marvel Studios has discovered the secret to successfully keeping an audience hooked. Superhero films are all about saving the world, but such dark, deep subject matter always needs a little playfulness to make it enjoyable. And, with this pattern proven successful, Marvel can continue testing its limits. Its next release, “Avengers: Infinity War”, already implies that every character will face his or her greatest physical and mental challenge. It will be truly interesting to see how this culmination will shape the franchise next. But one thing is for sure: it will be a hit.