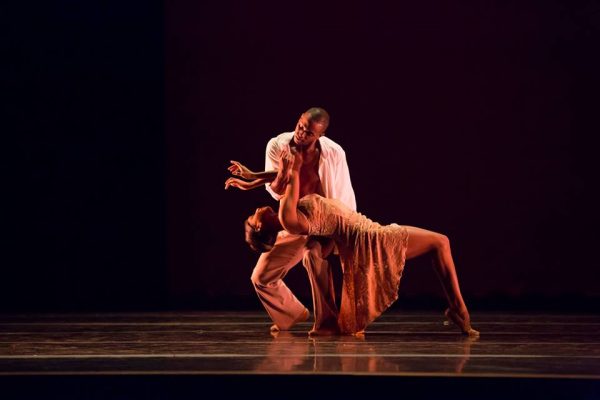 The joyful, iconic number “Put On Your Sunday Clothes” ignites a tangible energy that hums across the audience of the 2017 Tony Award-winning revival of “Hello, Dolly!” The song is a marker of excitement for both the characters and the audience, an emotion that only heightens as a full sized, cherry red train trolley rolls on stage with a cast of grinning, waving passengers. On board, marking her third Broadway show, is ensemble member Taeler Cyrus, Fordham College at Lincoln Center (FCLC) ’08.

Since her graduation, Cyrus has developed a résumé most dancers could only dream of, working internationally with stars like Kanye West, Mariah Carey, and Beyoncé while also performing Tony Award winning choreography on Broadway in “After Midnight,” “An American in Paris,” and now “Hello, Dolly!”

“Hello, Dolly!” opened last year after immense anticipation of Bette Midler’s return to Broadway in the title role. After taking home the Tony Award for Best Actress at 72 years old, there was no question: she’s still got it. According to Cyrus, Midler was just as exciting to work with as she was to watch, claiming that Midler is the epitome of a professional.

Cyrus also danced with Beyonce during her 2016 MTV Video Music Awards performance of her knockout visual album, “Lemonade.” “The two people I’m admiring right now because I saw their work ethic are Beyoncé and Bette Midler. It’s incredible the amount of work that they put into their craft because they know that they have to, and it’s incredible to see them reap the rewards right after,” said Cyrus.

On Jan. 14, Bette Midler said “So Long Dearie” to Dolly before the petite powerhouse Bernadette Peters stepped into the role on Jan. 20. The transition took place after one week of rehearsals during which Cyrus was rarely called. “I don’t even know what just happened!” Cyrus joked about the smooth transition between Broadway divas.

“She came out on stage that first show and killed it and has been doing remarkably well ever since,” she said. “It’s also really cool whenever anybody new comes in to see them get their rhythm. She turned on as soon as the audience was there.”

Cyrus also said that the show will see other changes aside from its leading lady; the cast is currently rehearsing new choreography. “It’s a treat to have something switch up a year in,” said Cyrus. While what the actual changes will be are still up in the air, Cyrus promises the audience will love them.

Before Cyrus was dancing on Broadway or backing up Beyoncé, she was running between pointe and history classes as a Fordham/Ailey B.F.A. student. Looking back on her time at Fordham/Ailey, Cyrus appreciates that the academic and physical rigor of the multifaceted program kept her sharp and taught her the importance of finding a sustainable balance between life and work. “It made me feel invigorated,” she said, “It’s a program that sets you up for success.”

However, she still wishes she would have made more time for herself when in college. Today Cyrus laughs that she has absolutely no problem finding ‘pamper-me’ time, a habit she recommends to current students getting into sooner. “Even if it meant getting up an hour earlier to have a cup of coffee and sit down, just breathe and take in my day and know what’s coming—I should have done that. Instead, my alarm went off at the very last second and it was just like go time from the second I woke up. That’s how you burn out,” said Cyrus.

“I like to take classes that are hard for me, that I know I won’t be good at,” she said about taking care of herself these days. It’s a new practice for her that helps her combat the dancer’s innate struggle for perfection. Taking difficult classes is “humbling” and reminds Cyrus that dancing is about learning and exploring not perfection.

While she is working on her triple threat by taking regular acting and vocal lessons, she admits she’s not looking to leave dancing behind anytime soon, “I love moving so much that whatever comes next still would need to include movement. I want to use my body as long as my body allows me to use it.”

To current Fordham/Ailey B.F.A. program students, Cyrus shares her universal philosophy: “Know what you have to offer, and know that someone is going to see it. You just have to bring forth all that you can and then let it go.” Above all, she said to remind yourself why you’re doing it all, whatever your “all” is. For Cyrus, her all is dancing, and her why is simple: “It feeds my soul.”