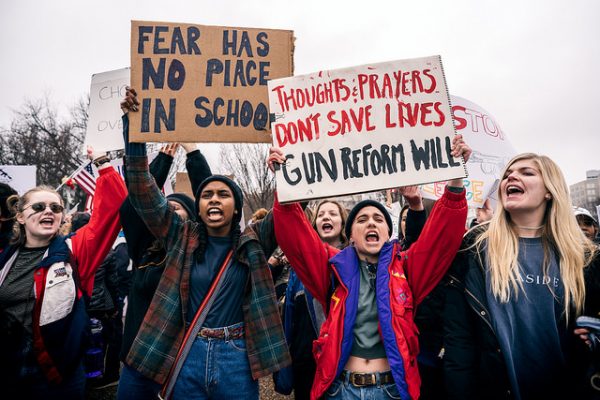 Teens For Gun Reform protests in Washington, D.C., after the Feb. 2018 shooting in Parkland, Florida.

As I reflect on the recent tragedy in Parkland, Fla., I can’t help but think of how little progress has been made since the Columbine school shooting in Colorado in 1999. I happened to live in Colorado at the time, just about 15 minutes away from Columbine High School. A classmate of mine was the cousin of one of the victims. In fact, the movie theatre that was the target of a shooting in 2012 was the same theatre my friends and I would frequent when we were young. Years later however, I have seen little to no progress in the gun debate in this country.

Frankly speaking, after the events in Parkland, nothing is going to get done at the pace we’re going. Money talks in this country, and it has the loudest voice by far. Too many politicians accept money from pro gun lobbyists, and those millions are too sweet to turn down, even if it means saving just one life. Maybe starting over is what we need, since clearly nothing has been achieved thus far. Let’s take a look at both sides in hopes of coming to some mutual agreement.

First, I get it. Guns are very important to many people in this country. In fact, the amount of guns outnumbers the amount of citizens. The first problem: too often I see both sides resorting to name-calling and baseless accusations, words that only help to push people away from common ground. No law-abiding citizen enjoys hearing tragic news of children dying in school shootings or any shooting for that matter. Telling someone they have blood on their hands because they strongly support the 2nd Amendment is not helpful to the cause. Furthermore, those on the pro-gun side need to remember that those in favor of gun control aren’t advocating for no defense at all. The issue is far more nuanced than that. So can we agree that safety is a top concern for both sides? Let’s move on.

When one side says “gun control,” it seems as though the other side hears something completely different. Gun control does not mean seizing and banning weapons. Pro-gun supporters often talk about how law-abiding and cautious they are with guns. This is fantastic. In fact, if that’s the case, there should be no reason to oppose the implementation of background checks for firearms. Wouldn’t you agree that a 19-year-old who is mentally unstable shouldn’t be allowed to easily purchase a deadly weapon? I think we need to understand that “control” doesn’t mean seizure. We have controls for alcohol, drugs, speeding and much more. Wouldn’t just a few controls that could filter unstable and dangerous individuals from obtaining deadly weapons be worth it? It is necessary to redefine what “gun control” means because it certainly has been distorted in all the commotion of this debate.

Finally, the single most important point seems to be the most obvious but the least realized. As soon as a tragedy happens, the pro-gun lobbyists are the first to be blamed. But let’s think about what their job is for a moment. Their purpose is to push their agenda and persuade lawmakers to support their points of view. They don’t work for the people, and frankly they shouldn’t have to consider the opinions of concerned American citizens. But do you know who does? Our politicians. Forget about tweeting your outrage, or debating until your voice is gone—the single most effective way to make a difference in this debate is to vote. Don’t blame the people giving the money, blame the politicians accepting it. Year after year, these same people win their elections, and we’re back to square one. Mobilize, organize and exercise your vote to make sure those who accept millions of dollars in contributions are not re-elected. If the number of people who are sick and tired of our youth being mowed down by deadly weapons is as large as it seems, there should be no problem forcing politicians to rethink who they allow to sway their opinions.

Without communication and balance, we will never solve the gun debate. I fear the events in Parkland, Fla., will not be the last unless we come closer to the middle on this issue. The solutions are there, but we need to have an educated and non-politicized discussion about this. This means less angry tweeting from behind our keyboards and more constructive dialogue. And remember: do not underestimate the power of your vote. Holding politicians accountable will literally save lives.