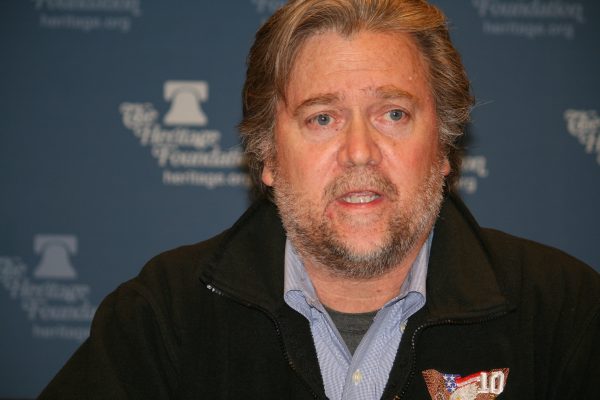 Steve Bannon has had an unexpectedly high impact on establishment Republicans.

Could one man single-handedly destroy the modern Republican Party as we know it? That is the question one might ask themselves after the impulsive and juvenile feuding between former Chief Strategist Steve Bannon and President Trump. Despite the constant scandals and embarrassments from the Trump White House, Steve Bannon is the largest existential threat to the GOP as it is known today.

Previously, Bannon served as an executive chair for Breitbart News, a far-right internet news source. Breitbart has long been controversial for its commentary on a variety of sociocultural issues. It has  been accused of running headlines and promoting viewpoints some believe serve as a descent into the gutter tactics of racism and ethnocentrism. Breitbart’s incendiary content should alarm concerned citizens. However, the primary cause of the GOP’s Steve Bannon problem is not Breitbart—despite its increased readership and visibility in the sphere of online media—it is Bannon’s plan to completely disrupt the party by supporting primary challengers to incumbent Republican senators. Bannon has pledged to endorse and fund GOP primary challengers to any incumbent Republican in the U.S. Senate with the exception of Ted Cruz. These primary challengers are required to conform to Bannon’s standard of being “anti-establishment,” and they must be ideologically far to the right and staunchly supportive of President Trump’s agenda.

The first Bannon-backed Senate candidate was Roy Moore, the Republican nominee for Alabama’s 2017 special election to the Senate. Moore’s main opponent in the Republican primary was Luther Strange, a more traditional Republican who was endorsed by Trump. Bannon and Moore cast Strange as too connected to the political establishment despite his mere six months of service in the Senate. In a deeply embarrassing setback for the president, Moore was voted by primary voters to be the Republican nominee. About a month before the Dec. 12 special election, the Washington Post ran a bombshell story that accused Moore of several instances of sexual misconduct involving adolescent girls. The race started to get national attention, and the chorus against Moore grew louder and louder and began to include many members of both major political parties, uniting both Democrats and Republicans. After the allegations of pedophilia, it should be noted that no Republican senator maintained their Roy Moore endorsement. Jeff Flake, a Republican senator from Arizona, even wrote a check for $100 to Doug Jones (Moore’s Democratic opponent in the general election) with “country over party” written on the check’s subject line. Rational individuals would clearly understand that Moore was undoubtedly a reprehensible candidate, a view that was affirmed by the majority of Alabama voters. Moore lost the election to Jones, who became the first Democratic senator from Alabama in over two decades.

The moral of this miracle in Alabama is not simply that candidates with credible accusations of pedophilia against them should be wholly unfit to contribute to society, much less to public service. It is also that the Republican Party as we know it is at risk of completely falling apart due to the extremist agenda of Steve Bannon. After all, the only thing Steve Bannon has accomplished is that he led to the election of a Democrat in deep-red Alabama. While one would expect the next candidates endorsed by Bannon not to be as repugnant as Moore, the angst and nativism expected by Bannon in the candidates he publicly supports will not bring in any new voters to a party already with a poor long-term outlook.

While an isolationist, anti-trade and anti-immigration platform for the GOP did lead them to victory in 2016, the road ahead for the party looks bleak if it continues on its current path. Trump is exceptionally unpopular, especially for a president serving under a generally optimistic U.S. economy. While much of his base (about 35 to 40 percent of the American electorate) will likely stay loyal to him for the duration of his presidency, he has completely repelled all other voters. As the United States gets younger, more clustered in urban and suburban areas and more diverse, a party that generally forms its base on older, rural whites is obviously going to have to significantly change after the Trump presidency to stay truly relevant in American politics.