The Controversies of This NFL Season 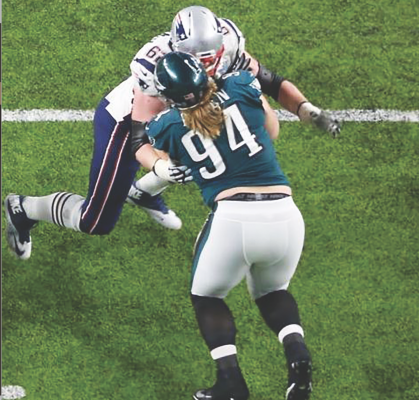 (Courtesy of Voice of America via wiki commons)

The 2017–18 football season has been one filled with controversies: including further understanding of chronic traumatic encephalopathy (CTE) and concussions, too many stars getting injured, players taking a knee during the National Anthem (started by former San Francisco 49ers quarterback Colin Kaepernick), the National Football League (NFL) garnering the attention of President Donald Trump and a declining number of viewers. In New York alone, both major teams completely crumbled this year, with the New York Giants going 3–13 and the New York Jets going 5–11. The 2017-18 season was complete chaos.

This year, the understanding of concussions and its long term effects, like CTE, have increased. Out of 111 former NFL players whose brains were tested, 110 had CTE. Symptoms of CTE include early onset dementia, suicidal thoughts and memory loss. CTE is more commonly found in players with a history of concussions, and as a result, there have been major pushes to try and limit the violence in the sport, as it is often the head-butting and tumbling often that concussions.

Kristian Nokaj, Fordham College at Rose Hill (FCRH) ’19 and a WFUV sports radio intern, said, “I think they have definitely taken great strides, but there’s a lot more to be done, again people are still going to watch and play even with the fear of concussions, but eventually if they don’t figure it out the league might be in trouble. But the way technology is going who’s to say they won’t have a helmet that absorbs hits?”

This season seemed to be the one in which every major player got hurt. Richard Sherman, cornerback for the Seattle Seahawks, Odell Beckham Jr., wide receiver for the New York Giants, Aaron Rodgers, star quarterback of the Green Bay Packers,JJ Watt, Houston Texans defensive end (who also won the Walter Payton Man of the Year for the money he raised for the Hurricane Harvey relief), David Johnson, Arizona Cardinals running back, and Julian Edelman, wide receiver for the New England Patriots all spent time on the bench due to their injuries. Steve Howard, Fordham College at Lincoln Center (FCLC) ’20, said,  “[The referees] don’t call helmet to helmet anymore. Players are literally charging at each others heads and the refs aren’t calling it, so more players are getting hurt.”

Back in 2016, a Colin Kaepernick started an argument by kneeling during the National Anthem. The disagreement continued into this year, and Kaepernick, who faced massive backlash to his actions, remains unsigned this year. There are two sides in this war: Kaepernick’s supporters, who thought that NFL owners were trying to take away the players’ rights to free speech, and Kaepernick’s protesters, who argued that players not standing was disrespectful to U.S. military veterans. Nokaj defended the movement, saying he “thinks it’s their right to do it, if they feel that they can get the message out of equality then do it! But I wish that they did it with Kaepernick; I feel that they threw him under the bus because no one stood with him.” President Donald Trump also voiced his opinion on the issue, stating that players refusing to stand was disrespectful. He also threw a shot at Commissioner of the NFL, Roger Goodell, saying that Goodell lost control of the league. The President has also stated that any players who kneel on the night of the Super Bowl, if they win the game, will not be invited to the White House.

This year, NFL viewership has been going down, but a decreasing number of views hasn’t been too traumatic to the franchise. In 2016, there were 16.5 million viewers per game, however, in this most recent season (2017), there have been an average of 14.9 million people tuning in to watch each game. While this is still a huge number, it is a nine percent drop. Some people think that there are certain aspects that need to be fixed. For example, the NFL needs to attract younger viewers. Additionally, the game could be considered too long, at approximately three hours a game, with multiple games per week. Football games are basically a full day affair; on an average Sunday, there are three time slots with usually a few games on at the same time. Howard added, “I think that [the NFL] is losing viewers because the league is allowing players to express their political beliefs. It all started with Kaepernick as he promoted kneeling during the National Anthem. Many people see this as a sign of disrespect and just don’t want to support this behavior so they stop watching.”