The Secret Life of a Student Olympian 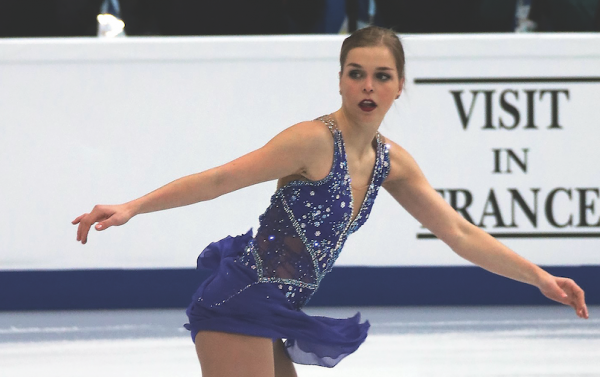 (Courtesy of Luu via wiki commons)

Nicole Rajic is no stranger to both long hours on the ice and hitting the books. Officially becoming a Fordham alum in December 2017, Rajic is also no stranger to another prestigious institution: the Winter Olympics. As the 2018 Winter Olympic Games commence in Pyeongchang, South Korea, Rajic will head across the globe to compete on behalf of Slovakia for the second time. A two-time Olympian (she made her Olympic debut in the 2014 games in Sochi, Russia), Rajic has been able to do the impossible: balance school and skating, leading her to become both an Olympian and a college graduate. How does she have the ability to manage all of these things? With large amounts of hard work, determination and a little support along the way.

Rajic’s journey to the Olympics started many years ago at the age of three, when she first hit the ice. Her parents put her into the sport to help with her balance, and her love of skating has not faltered since. By the age of 12, Rajic had become a competitive skater and had perfected her double axel—a jump where the skater must take off from a forward edge and complete 2.5 revolutions in the air before landing backwards back on the ice. Yes, it is as hard as it sounds.

From then on, Rajic felt she had the capability to go on to learn harder elements and compete at higher levels. A year after perfecting her double axel, Rajic qualified for the U.S. Junior National Championships, one of her first major competitions. However, it wasn’t until the year before the Sochi Olympics Games that Rajic felt the Olympics were a “realistic dream.” After working extremely hard all season, she was nominated to represent Slovakia at the Olympics and ended up placing in the top 25.

Competing and training were not the only things on Rajic’s plate in 2014—she also had business classes to study and prepare for. Being both a student and a competitive skater requires an extreme amount of time and dedication. “At times it was very difficult to balance the two,” Rajic said. She attributes much of her success in both areas to her daily routine and discipline. “I’ve had to stay very organized with my time,” she said. “In general though, once I developed a routine, it was relatively easy to follow through and just go to school and skate.” Rajic’s coach, two-time Olympic Coach Igor Krokavec, had nothing but praise in regards to Rajic’s perseverance in both school and skating: “She realized this was, for her, the best—to be busy and keep her in a rhythm in life. She finds herself comfortable with this situation and she keeps improving every year, every season,” Krokavec said.

In the figure skating world, it is common for a skater to be homeschooled once they are nearing or achieve a high level, or take a gap year, which Rajic did, after high school. However, though Rajic had more time on her hands for training during the gap year, she still felt something was missing without school in her weekly routine. “I took a gap year between high school and college, and it was the worst year of my life. I didn’t like just waking up, going to the rink, skating for a bit, seeing the same five people everyday and just going home. I was extremely unmotivated to skate, because it was constantly the only thing on my mind,” Rajic said. Though adding school on top of a rigorous skating schedule can be taxing at times, it does provide athletes, like Rajic, an opportunity to take their mind off the stress of the sport. Keeping it simple, however, Rajic emphasized her love for learning—school has provided her the opportunity to embrace that.

Like most people who are hardworking and ambitious within their sport, support is an important element to Rajic’s success—a “crucial” component. “My parents are my biggest fans, and if I didn’t have their support I wouldn’t have gotten this far. If I have a rough day of training, my parents are the first ones, well, aside from my coach, to keep me up mentally and motivate me to keep going,” Rajic said. “The support I receive from my friends is also very important, because it shows me that they value what I do.” Rajic added that her support system would not be the same without figure skating fans. When describing how happy she is to be able to interact with fans, Rajic said, “It makes me feel like my skating means something to more than just myself, and I love that other people appreciate what I do!”

Many of us witness the Olympics from the comfort of our own home, and few will experience them the way Rajic does. As she takes center ice before her performances, she will have a front row seat to the Games. “It’s super exciting to be able to exhibit our hard work in front of the biggest audience we’ll ever receive because the whole world, not just skating fans, are watching,” she said. Rajic’s hard work and exceptional skating abilities have brought her to one of figure skating’s largest stages, which only comes around once every four years. Becoming an Olympian at a young age is one thing. However, becoming an Olympian while being a Gabelli student is extremely commendable for Rajic.