“Won’t Stop Until It Rains Glass” 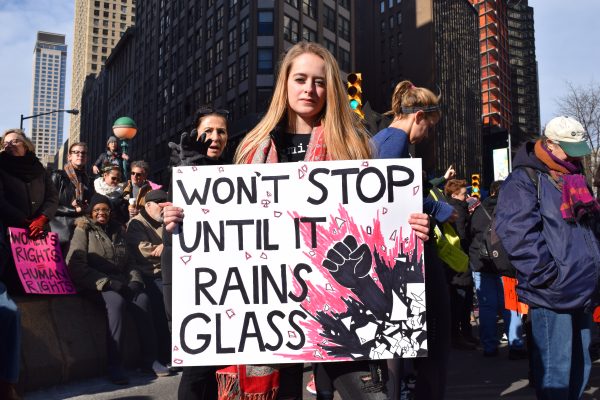 The 2018 Women's March directed its focus to this year's midterm elections while still retaining its message of solidarity (LENA ROSE/THE OBSERVER).

It has undeniably been a year of profound demonstration for Fordham University, New York City and the greater part of the nation. Much of second semester in 2017 was marked by student protests at the Rose Hill and Lincoln Center campuses, mass rallies across a wide array of cities and issues ranging from immigration to race relations on part of President Trump and his administration. The amalgam of the sentiment manifested itself in the largest protest in U.S. history, the Women’s March.

Following a turnout estimated at 3.3 to 4.6 million in its inception, hundreds of thousands of protesters took to the streets Saturday, Jan. 20 for the March’s second year, the theme: Power to the Polls. The route, which stretched from Central Park West on the Upper West Side well into Midtown via Sixth Avenue, ran alongside Trump International Hotel and Tower, which sits at the northern apex of Columbus Circle, only a block from the Lincoln Center campus where students rushed to join the crowd.

Leah Johnson, Fordham College at Lincoln Center (FCLC) ‘20, set out with a friend to Columbus Circle at around 11:00 a.m. Saturday, hoping to group up with the start of the march, but found the area already flooded with people. Instead, they made their way up Columbus Avenue and cut across near the American Museum of Natural History to Central Park West.

Johnson waded slowly down the avenue among the thousands of sign holders, chanters and musicians, approaching a band of protesters brandishing a sea of sapphire cardboard swells. A slogan, “LET’S ELECT NEW PROGRESSIVE OFFICIALS” was painted on the side of one. The group which called themselves the “Blue Wave” was there to register Democrats in Staten Island.

“It kind of stands out, the fact that these groups were trying to get voters in Staten Island to swing left,” Johnson said. “I saw people with clipboards writing down names, registering voters, asking people, ‘Are you going to vote? Do you live on Staten Island? Will you be voting?’”

She appreciated that the focus of this year’s march had shifted from outrage over the results of the 2016 presidential election to a cohesive democratic push for 2018 midterm elections. “We’re focusing on taking back the House and the Senate,” Johnson said.

“People of all identities, I want them to end facing oppression,” she added. “I know that’s a huge hope, but I think progress can be made, and I think we can do so through electoral politics.”

Meanwhile, Cat Reynolds, FCLC ‘19 was working her way through the crowd at Columbus Circle, snapping close-ups of marchers with her Sony Alpha 55 camera.

“I just thought, ‘this is kind of a historic moment.’ It would be kind of cool to go out and take some pictures and be a part of it.” Reynolds said and started shooting.

Her subjects were varied. Some traveled in groups and wore fur coats, while others were far too set on their “mission” to be stopped. They gripped signs that read “GRL PWR” and “HELL HATH NO FURY LIKE A WOMAN SCORNED,” but it was the children that especially caught Reynolds’ eye.

“One kid had a sign that was, ‘My President taught me the word “s–hole,”’” she said. “It made me realize the effects that it does have on children…that kindergarten is not safe from politics. It’s everywhere, so even children have to be aware.”

Likewise, Elisabeth O’Neill, FCLC ’19, was amazed by the number of parents who brought their children to the rally. Even as protesters shuffled about, cheers of support ringing out from parkside curb and surrounding apartment buildings, she recalls seeing a little boy amongst the crowd.

“He was with his mom,” O’Neill said. “It was just really cool to see especially younger people, and even super young like this little guy, supporting the cause with their parents and being able to learn it from a really young age.”

In her view, the Women’s March does not solely stand for women, nor is it only upheld by them. “It’s not just women coming together to fight for women’s rights,” O’Neil said. “Our society as a whole, especially with women combined in that voice have a huge power to shift the status quo.”

As the march went on and protesters wandered out from the gated streets of Central Park West or strode onward, Johnson, O’Neill and Reynolds headed home. The impression that remained was a hopeful one.

“It felt like raising each other up,” Reynolds said. “We’re all here. We’re still here.”