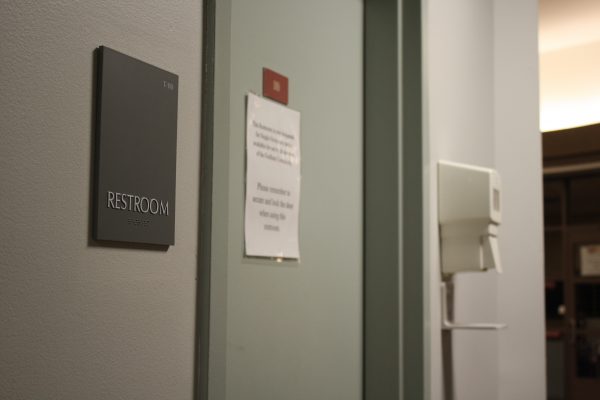 Signage of bathroom located near the lobby of McMahon Hall was changed to just say “Restroom” in 2017. (ASEAH KHAN/THE OBSERVER)

Recent restroom and student housing policy changes occurring at universities have led to a national discussion about gender inclusivity on college campuses. Fordham is no exception, as the recent modifications regarding single-occupancy restrooms at Lincoln Center have led to a newly-formed group of students pushing for revision of the current rules in order to support the school’s transgender and queer community.

The Positive, the student coalition calling for change in current university policies, was founded in 2014 by Chris Hennessy, Fordham College Lincoln Center (FCLC) ’15, and continued by Eliza Putnam, FCLC ‘18, Fiona Whalen, FCLC ‘19, Anthony Perez, FCLC ‘19, and Samantha Norman, FCLC ‘18.  At the first meeting held on Nov. 15, the students led a presentation on the current policies surrounding single-occupancy restrooms, as well as how the coalition hopes to make safety and accessibility a priority when requesting policy changes for Lincoln Center.

One major concern is the signage of the restroom itself. According to Putnam, Hennessy reached a compromise with Dean of Students Keith Eldredge on having a gender-neutral sign beside each single-occupancy restroom that stated, “This bathroom may be used by anyone regardless of gender identity and expression.”

“If the sign says it can be used by anyone of that gender identity or expression, then it’s saying that ‘I’m safe. I’m allowed to use this restroom,’” Putnam said. “And if anyone tries to harass me, I can say ‘This is Fordham policy.’”

The following semester, a laminated sign that said, “This bathroom may be used by any member of the Fordham community,” was put beside each door, next to another sign beside it that said, “please remember to lock this restroom” in bold letters, something that Putnam finds “offensive” and “degrading.”

Eldredge said that the signs were designed to be temporary, in order to prevent confusion with students, employees and administrators who were used to waiting in line inside the once double-occupancy restrooms. It was decided that they would be removed after student representatives from USG recently requested to take the sign down.

“The intent of the time was never to imply that someone transgender or nonbinary was threatening to someone,” Eldredge said.

During the meeting, The Positive referred to a 2014 independent survey conducted by Hennessy that found 90 percent of 441 students were in support of having gender-neutral bathrooms at Lincoln Center. Additionally, 70 percent of transgender and gender-nonconforming students surveyed experienced feelings of stress and anxiety when using public restrooms, as well as 20 percent reporting that they experienced physical violence or the threat of physical violence when using a public restroom.

However, while the signage of the restroom remains an important issue for The Positive, Whalen said that it is just one part of the overall objective of the coalition.

“It’s not just about bathrooms,” Whalen said. “It’s about the recognition and support of queer, transgender and genderqueer students on campus.”

The effort to provide recognition and support also includes housing and general identification  policies on campus. Fordham’s housing procedure requires a physical transition in order to change a student’s name in the university system and to avoid housing designated by the student’s assigned sex at birth.

Perez says that while Jenifer Campbell, director of residential life, and other ResLife staff have been “really great” in helping him make specific accommodations, the policies currently in place don’t go far enough to be considered gender-inclusive.

“When a university that you pay to attend doesn’t acknowledge or reflect you, that’s a problem,” Perez said.

Additionally, several students say that safety is another main concern for changing the existing policies. Perez describes an instance where, when trying to receive a guest pass for a female friend, he had to explain why Fordham lists him as female in front of several strangers in the RA office.

“With me having to out myself in front of people that I don’t know, I can possibly put myself in danger,” Perez said. “Now these people, who I’ve never met, know something so personal about me. Disclosure is a personal choice, but I was forced to disclose this information in order to verify that I could have someone stay over.”

In addition to updating the university standards, Whalen also believes that education would be a useful tool in helping the student body to have a better understanding of what it means to be someone affected by the policies.

“Folks don’t know a lot about gender or sexuality and how that experience can change a person’s life on campus,” Whalen said. “Fordham as an educational institution has a duty to its students to have some kind of diversity program in place.”

Perez hopes to see the Ignatian-Jesuit principle of “cura personalis,” or care for the whole person, reflected in administrative policies.

“If Fordham is a university that prides itself in Jesuit values and prides itself in being receptive and caring, I think it’s definitely in their best interest to support gender inclusivity on campus,” Perez said.