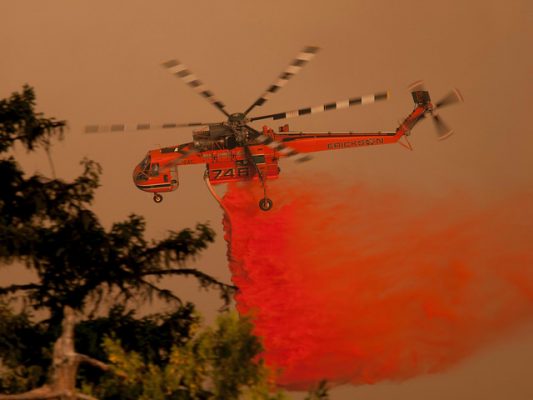 COURTESY OF U.S. DEPT. OF AGRICULTURE

Natural disasters have become alarmingly commonplace... and we're paying for it.

You can admit it. You’ve seen the headlines. Wildfires. Hurricanes. Droughts. You’ve glanced and skimmed and swiped and scrolled and, at long last, you did one thing we humans are really, really good at: you sent your Thoughts and Prayers™ and forgot about it. With the sheer volume of natural disasters in 2017, I can’t blame you.

But allow me to speak in a language we all can understand: at the end of 2017, after flood waters receded and fires finally fizzled, we tallied a bill worth paying attention to.

Last year, Mother Nature dealt the United States of America its costliest recompense to date: a string of hurricanes, wildfires and other natural disasters totaling $306 billion in damage. The runner-up: 2005’s $215 billion price tag, thanks in no small part to a certain Hurricane Katrina. Moreover, the top three disasters of 2017—a murderer’s row of hurricanes Harvey, Maria and Irma—alone smashed 2005’s record, dealing $265 billion of destruction.

It’s times like these in which one starts to suspect our nation just might be built on a Native American burial ground.

It’s safe to say that last year, America was hit hard. Three storms category four or higher made landfall last year, the California wildfires were the costliest on record and our country experienced billion-dollar disasters in six of the seven categories the National Oceanic and Atmospheric Administration (NOAA) tracks: tropical cyclone, wildfire, severe storm, flood, freeze and drought. A costly winter storm in 2017 could have completed the set (and my natural disaster bingo card).

I’ll direct those who saw 2017 as a fluke to the very first days of January 2018, when we were introduced to the terrifyingly-named “bomb cyclone.” Weaponized winter came with a hefty price tag as well, and might just indicate that—unlike liquids, waning crescents, and emo teens—it’s not just a phase.

Do you yearn for the old days? Do you pine for simpler times when “polar vortex” was the scariest-sounding buzzword on the Weather Channel? Do you look fondly on the years gone by filled with only one or two devastating hurricanes per year?

There’s good news: the good ol’ days when every natural disaster didn’t cause Bill Gates’s net worth in damage aren’t gone forever. That being said, even to begin to sidestep this snowballing yearly insurance claim, we first and foremost have to take accountability.

In the current world climate—political and otherwise—it is easier to pretend that everything is more or less going to even out. Hurricanes Harvey, Maria and Irma delivered their refutation loud and clear: this is not normal.

Is it a result of global warming? Climate change? Aliens? Who cares? Debate over terminology and politics bring us back to square one: partisan squabbling that goes in one ear and out the other of a nation that skims and swipes and scrolls and forgets. It’s time to break the cycle.

Some push for greenhouse gas emission reduction, others push for fortifying vulnerable regions against future disaster. These opinions are often pitted against each other on party lines when, in reality, they are both helping. They are both valuable solutions. It doesn’t matter what party you cheer on like some football team—hurricanes don’t just flood Republican homes, nor do wildfires exclusively torch Democrats’.

It doesn’t take a liberal or a conservative or an anarcho-capitalist to tell that this is not normal. And our insurance bill will keep getting bigger every year we will twiddle our thumbs like our lives depended on it. As natural disasters are made into talking points and ammunition against another group of people who live on the same Earth as everyone else, the implications of 2017’s $306 billion slap in the face get lost in the details.

And what’s left? Thoughts and Prayers™. And the world keeps spinning.