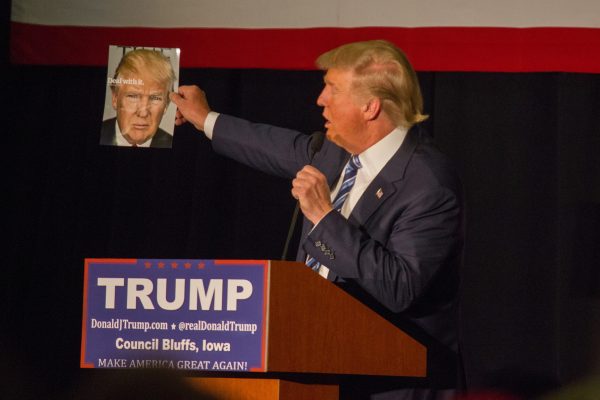 One year since taking office, President Trump reflects on the first quarter of his tenure, as do all Americans. (MATT JOHNSON VIA FLICKR)

It has now been just over one year since businessman and reality television personality Donald J. Trump added “politician” to his résumé. But just because one has a job does not mean they are good at it. It is only appropriate for someone to analyze the first quarter of the president’s tenure, so I am going to do so from as much of an unbiased standpoint as possible. So without further ado, allow me to enumerate Trump’s standout accomplishments, failures and other impactful moments.

First, let’s explore Trump’s “Contract with the American Voter,” which he called his “100-day action plan.” One promise was to suspend immigration from countries deemed “terror-prone.” He delivered on this pledge: after jumping over many hurdles, mostly in the form of court challenges, a ban on immigration from six Muslim-majority nations took full effect last month. He fulfilled this promise.

He also swore to renegotiate or withdraw from the North American Free Trade Agreement (NAFTA) as well as withdraw from the Trans-Pacific Partnership (TPP). His renegotiations regarding NAFTA are ongoing, so I cannot say whether or not he has followed through in that respect. He has withdrawn the United States from the TPP, though, so that can be chalked up as a victory for Trump.

Additionally, he planned to cancel the spending of billions of dollars on climate change programs within the United Nations. Last summer, he did just that with his controversial decision to remove the U.S. from the Paris climate accord. Trump fulfilled this promise.

Another promise was to grow the economy by four percent each year. The economy is measured in terms of real gross domestic product (GDP). He fell short of this promise in his first year in office, as real GDP grew only about two percent in 2017. Growth of four percent is unhealthy—a healthy rate is between two and three percent—but perhaps Trump should have known that before he promised it during his campaign. In the same breath as the GDP promise, he also promised to add 25 million jobs. That did not even come close to happening: 2.1 million jobs were added in all of 2017. If the same rate were kept all four years of his term, 8.4 million jobs would be added. His promise to add 25 million within his first 100 days does not really make sense. But he promised it… and failed.

He also promised to “drain the swamp,” which is his phrase for ridding Washington of corrupt politicians and hiring outsiders he trusts more. Many of his appointees, though, were politicians—like Attorney General Jeff Sessions and Secretary of Energy Rick Perry—or other corrupt individuals—like Secretary of Education Betsy DeVos and Goldman Sachs executive Steve Mnuchin. So, he failed on this one, too.

Finally, and perhaps most importantly, he promised to repeal and replace the Affordable Care Act. Despite four attempts to repeal Obamacare, it has not happened yet, and Republicans have decided not to try again for the time being. This was also a failure.

Let us also discuss some of the standout moments of Trump’s presidency not related to campaign promises. He signed a new tax bill into law, achieving the first major tax overhaul in 31 years. He allowed work to continue on the Dakota Access Pipeline (DAPL) and Keystone XL Pipeline, both of which have leaked. He nominated Neil Gorsuch, who was confirmed, to the Supreme Court, sealing a conservative majority for the foreseeable future. He tweeted almost 2,500 times. He called Africa and Haiti (but not Norway) s—holes. He rolled back protections for transgender students. He called Kim-Jong Un “rocket man”… a lot.

There is a lot to digest here. But there is one key takeaway that I want you to focus on: this is the most divided the country has been since the Civil War. If you are a textbook American conservative, you probably think Trump has done a fantastic job. But if you are a liberal, you probably think Trump is a failure. Neither is necessarily factually true, but it is important to remember that the Trump debate has often been reduced to a party-line battle. This is wrong.

At some point, a bipartisan America must collectively realize that Trump does not have the best interest of Americans at heart. The fact that he has not fulfilled several of his campaign promises for his first 100 days in his first full year is troubling. And the campaign promises he did fulfill are deeply problematic and harmful to the future of the country and the globe. Namely: his “Muslim ban” and calling Black regions “s—holes” are testaments to his xenophobia; his removal of rights for transgender children shows his transphobia; his new tax bill protects colossally wealthy organizations and widens the gap between the rich and the poor; his “swamp draining” has delegitimized Washington; his allowance for the pipelines to continue construction shows his disdain for both Native Americans and the environment; his removal of the U.S. from the Paris agreement further shows his carelessness for the well-being of the planet; and so on.

All these faults are not one-off instances of lapses in judgment or failure to think situations through. Trump has displayed a pattern of incompetence and carelessness while in office. He clearly does not comprehend the immensity of the decisions he is making, because if he did, he would take every American (and immigrant) life more seriously and treat each life with more respect. Either that is the case, or he blatantly hates the groups he is attacking and marginalizing: Muslims, transgender people, poor people, Native Americans and many more. Either scenario is six of one, half a dozen of the other—they are equally damaging.

Donald Trump has failed miserably his first year in office. Here’s to only three more.