Fordham Basketball: In It to Win It 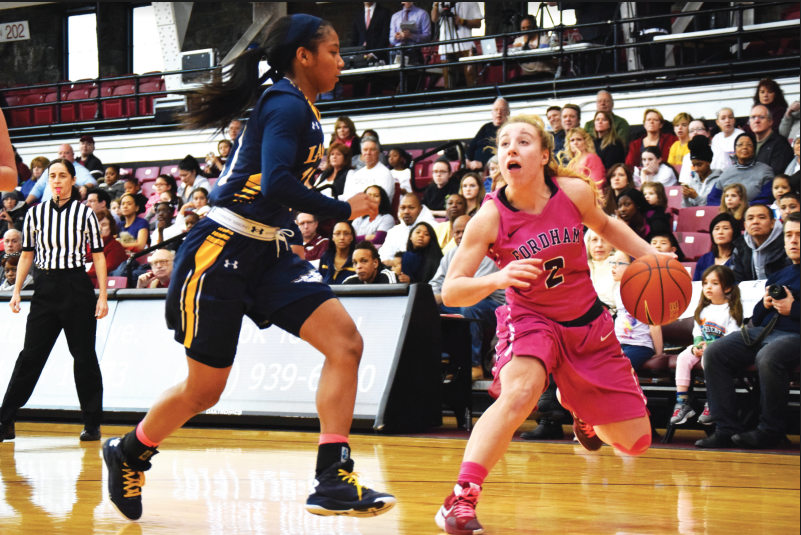 Although students are still navigating their new classes of the semester, the Fordham basketball teams are already in full swing, for both the men’s and women’s teams. Currently, the Fordham women’s team is in 3rd place in their Atlantic-10 division, closely following Dayton and Duquesne, respectively. Two players seem to always stand out — G’mrice Davis, Fordham College at Rose Hill (FCRH) ’18, and Bryson Cavanaugh, FCRH ’20. On Jan. 6, Davis entered the all-time Top-10 in career points. A few days later, she was named the Player of the Week for the Metro Basketball Writers Association (MBWA). A little over a week later, she became one of two Fordham players who has over 1,000 career points and rebounds to her name. For the first week of January, Davis was named the Atlantic-10 co-player of the week. Cavanaugh was named the National Freshman Player of the Week. Cavanaugh earned this title after she helped Fordham beat every team they played in the first week of January. A week after her teammate Davis became the Player of the Week for the MBWA, Cavanaugh won that same honor. This was Cavanaugh’s second time being selected for this, the previous time being the week of December 19.

Although Fordham is doing well this season, this was not always the case. Their successes can be attributed to head coach Stephanie Gaitley, who has been at Fordham University for seven years. Before she stepped in, the Fordham team was not the powerhouse it is today. Instead, they went almost twenty years without a winning season. For the past six years, since she took over, Fordham has gone 120–76. In her second year as head coach, the Fordham women’s team finished the season ranking first in the Atlantic-10. Three players, Kristen Ryan, FCRH ’19, Katie McLoughlin, FCRH ’21, and Lauren Murphy, FCRH ’21, were recently told that they had received full scholarships for the spring semester.

In contrast to the Fordham women’s team, the Fordham men’s team is in second to last place in their A10 division. In their most recent game, they lost 64–41 to Duquesne. During this 2017–18 season, the two players who have logged the most points are Will Tavares, FCRH ’19, with 238 points and Joseph Chartouny, FCRH ’19, with 193 points. The team lost in a close game against Harvard in early December, where they lost by only two points. For the majority of the game, Fordham was winning, until it came down to those fateful and final nine seconds where Harvard took the lead and subsequently won the game.

Chartouny was named to the 2017 Atlantic-10 All-Academic team and the 2016-17 Preseason All-Atlantic-10. He set the school single-season steals record and leads the Atlantic 10 in steals. Tavares was very instrumental in the win over the New York Institute of Technology (NYIT), where he scored seven points, had five rebounds, and four assists. Head coach Jeff Neubauer has been with Fordham for three years. In his first year as head coach, he helped the Fordham Rams achieve their best record in almost ten years. In that same year, Fordham made their first postseason appearance since 1992. The following year, the Fordham men’s basketball team was one of only four Atlantic-10 teams to have a winning record in conference road games. Fordham beat Virginia Commonwealth University (VCU) for the first time in league history last year. Neubauer’s plan for success focuses on a strong defensive strategy.

Hopefully we can keep our heads in the game this semester just as well as our Fordham basketball players, as they continue to climb the ranks of the Atlantic-10.