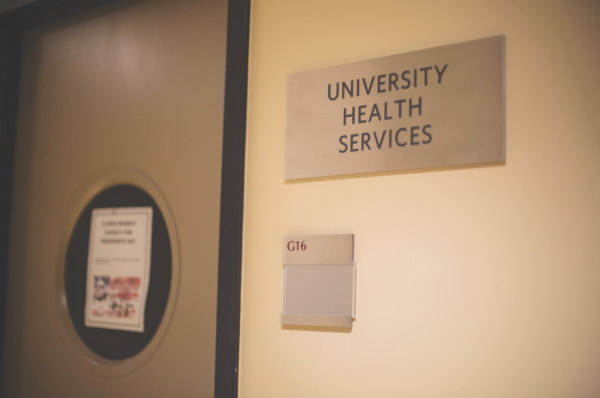 Not only are 49 states reporting widespread flu activity, but the current strains are especially severe (Jon Bjornson/THE OBSERVER)

Accordingly, 49 states are reporting widespread flu activity. During a CDC press release given on Jan 12, Dan Jernigan, Director of the Influenza Division in the National Center for Immunization and Respiratory Diseases (NCIRD), remarked, “Our team that does this kind of surveillance studies has been doing this … for 13 years, and this is the first year we had the entire continental U.S. be the same color” on the map of flu activity.
Annually, influenza (flu) causes 140,000 to 710,000 hospitalizations and 12,000 to 56,000 deaths in the United States. Most often, these severe cases occur in children younger than five, individuals aged 65 years or older, and individuals with preexisting health conditions like asthma and heart disease.

Flu is a respiratory illness caused by the highly contagious influenza viruses. Flu viruses exist year-round, yet flu activity largely increases during the fall and winter. The severity of flu activity depends on the disease-causing qualities of the influenza viruses, when the season starts and peaks, the effectiveness of the flu vaccine and the number of people who are vaccinated. In particular, the most common circulating influenza virus during this current season is the H3N2 influenza A virus. During the first week of 2018, 88.6 percent of the influenza A viruses tested were of the H3N2 subtype. Seasons in which the H3N2 virus is the most common see more severe cases of the flu, more hospitalizations and more deaths than any other strain. One integral reason behind the rise of H3N2 is due to the flu vaccines inability to protect against H3N2 infection. Estimates for this season’s vaccine are still underway, yet Jernigan claims that the vaccine’s effectiveness will be similar to last season’s at about 30 percent.

Overall, the flu vaccine was 40 percent effective in preventing illness in the 2016-2017 season. The reason behind this low number lies in the methodology used to produce vaccines: researchers have to predict which viruses will dominate. This prediction stems from data collected six to nine months before the vaccine deploys, leaving plenty of time for the viruses to mutate. Thus, the viruses circulating in one season are very different from the viruses circulating in the next. On top of this fallacy, flu vaccines are produced in eggs. There is evidence to suggest that the process of growing the vaccine in eggs affects its ability to produce antibodies against H3N2. The CDC is well aware of these pitfalls; Fitzgerald concedes, “while our flu vaccines are far from perfect, they are the best way to prevent getting sick from the flu and it is not too late to get one.”

On top of getting the flu vaccine, the CDC recommends avoiding close contact with sick individuals, washing your hands regularly, and covering your nose and mouth with a tissue during a cough or sneeze. If you happen to become ill with flu-like symptoms, your doctor can prescribe antiviral drugs to alleviate your flu. Antiviral drugs can make flu symptoms milder and shorten the length of illness. Moreover, antivirals can prevent life-threatening flu-related complications. The CDC strongly recommends that high-risk individuals utilize antiviral drugs, for antivirals “can mean the difference between having a milder illness versus a very serious illness that could result in a hospital stay.” Lastly, antivirals work best when they are taken within two days of the onset of flu-like symptoms.

All things considered, there are still 11 to 13 weeks left in the flu season, and it is still unclear as to weather the first week of 2018 was this season’s peak. Even though the vaccine is not 100% effective, it still has the ability to heighten your immune system against the influenza viruses. If infection occurs, the vaccine gives your immune system the ability to react more quickly to the virus. Thus, the vaccine may shorten your sickness. Above all else, the more people who are vaccinated, the less likely people who are especially susceptible to influenza will catch the virus. Flu vaccines are far from perfect, yet they still provide ample benefits to you and your community.