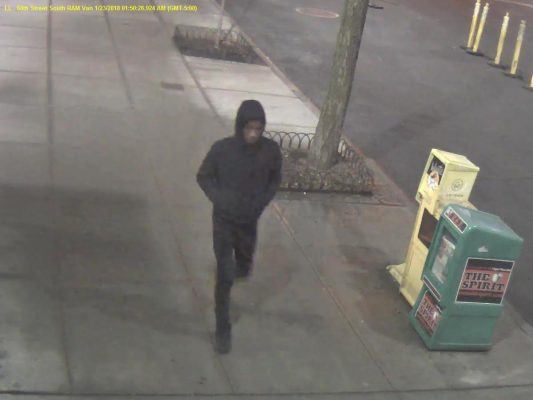 (COURTESY OF PUBLIC SAFETY) The suspect was recorded in the surveillance footage of a Ram Van camera on 60th Street.

Tuesday morning, a Fordham student was assaulted during an attempted robbery on 60th Street between Columbus and Amsterdam Avenue near the Lincoln Center campus, according to a university-wide Public Safety alert sent on Jan. 23.

According to the email statement by John Carroll, associate vice president of Public Safety, a female Fordham student walking between the avenues was approached by a man at approximately 1:50 a.m. He asked her for the time, and then demanded to have her iPhone. She refused, and began to walk toward the front door of McMahon Hall when the assailant punched her in the face and ran east on 60th Street toward Amsterdam Avenue.

The suspect, captured on a Ram Van surveillance camera, is described by Carroll as “a Black male, 5’6” in height, slim build, approximately 26 years of age, wearing a black hooded jacket, black pants, and black sneakers.” The NYPD was contacted after the assault and canvassed the area prior to the incident without results.

“The case is now in their domain,” Carroll wrote in a separate email to The Observer. He noted that if an arrest occurs, the victim could be asked to identify the suspect in a photo array or lineup.

“Student Affairs and Public Safety will totally support and accompany our student/Victim at every step so she’s never alone,” Carroll added. The student refused medical treatment.

The attempted robbery is the first Public Safety alert of the year to involve a Fordham student by the Lincoln Center campus. The last incident, an attempted robbery of two male Fordham students, occurred on Sept. 5, 2016. Two male suspects threatened the students with a yellow X-Acto knife and demanded their property. They were uninjured, however, and the assailants left before taking any of the students’ belongings.