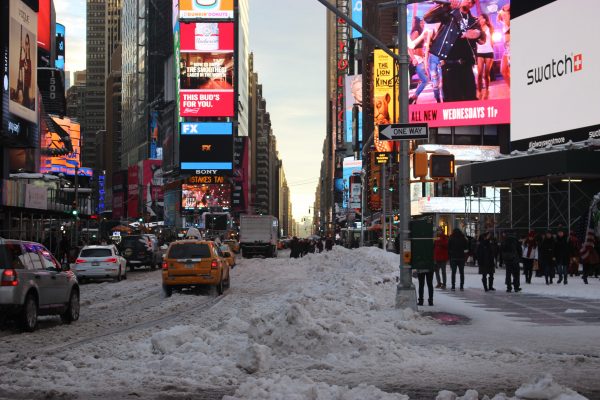 As the new year approached, temperatures on the east coast of the United States hit  new record lows. Within the early weeks of January, a “bomb cyclone” worked its way up the coast from Florida and Georgia, bringing feet of snow and freezing temperatures to Fordham Lincoln Center.

While “bomb cyclone,” or “bombogenesis,” is an extreme name for a storm, its title is relatively common. According to The New York Times, a “bomb cyclone” is defined by how quickly the atmospheric pressure falls, which is a characteristic used to classify any storm. The  barometric temperature must drop at least 24 millibars in 24 hours for a storm to be classified as a “bomb cyclone.”

While some Fordham students departed for the warmer west coast or travelled abroad for winter break, countless others who stayed had to endure the bone-chilling weather on the east coast. Izzi Duprey, Fordham College at Lincoln Center (FCLC) ’20, was one of the students that experienced the “bomb cyclone” in New York.

“I’m originally from New England, so I’ve been in pretty legit snowstorms before, but the amount of snow and how fast it accumulated was crazy,” Duprey said.

According to the Washington Post, New York City accumulated a total of 9.8 inches of snow in just 24 hours.

“I went to babysit in the morning and could barely see where I was going, and the sidewalks hadn’t been cleaned or anything yet which is kind of rare for the city, so that was a different experience,” Duprey said. “By the end of the day there were piles of snow outside of Fordham on 60th Street almost as tall as me, which is normally expected in parks or empty lots but it was unusual to see that on the street where cars were still attempting to drive.”

“There are always wind tunnels here in the winter, but when I was going across the avenues during the storm, I actually felt myself being pushed backward by the wind,” Duprey said. Winds in New York City reached a high of 60 miles per hour. “Everything was cleaned up fast, though. By the next day all the sidewalks were clear, but because it stayed so cold there was a lot of ice so it was still a little tricky walking around.”

“At first, it seemed like it would be a normal snowstorm, but as the day went on the snow started coming down heavier and the wind picked up,” Umbrell said. “When we went to shovel in the evening, the wind was so strong that the snow had been completely blown away in some areas. The extreme cold meant that the snow didn’t melt at all, and roads were icy for about two weeks following the storm.”

While it is still frigid, the weather in New York City has not been as extreme since the “bomb cyclone.” Here’s hoping that the remainder of winter will remain fairly mild and spring will arrive in a timely manner.