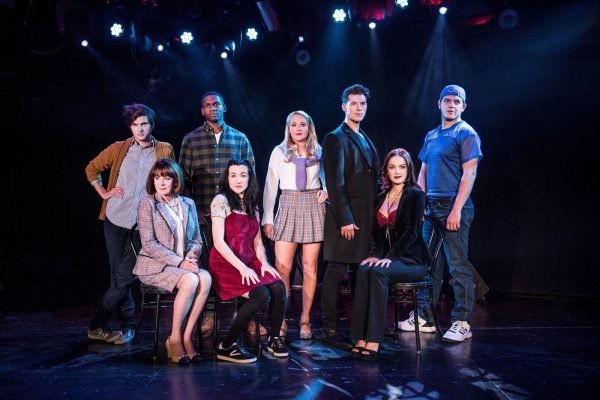 Cunning teenagers, elite New Yorkers, a revenge sex scandal and all of your favorite 90s tunes? “Cruel Intentions: The Musical” at (le) Poisson Rouge has it all … and you don’t want to miss it.

Based on Roger Kumble’s 1999 cult classic, the stage adaptation of “Cruel Intentions” pulls you back into the manipulative world of Manhattan’s most dangerous step-siblings, Sebastian Valmont (Constantine Rousouli) and Kathryn Merteuil (Lauren Zakrin). Seduced by revenge and fueled by passion, the two make a bet on whether or not Sebastian can live up to his promiscuous reputation and deflower Annette Hargrave (Carrie St. Louis), the virginal daughter of their elite school’s new headmaster, before term begins.

This stage adaptation keeps all of the classic lines movie fans know and love while adding in 90s hits that leave audience members both nostalgic and pleased. Zach Spound brilliantly weaves the biggest and most recognizable songs from the decade into the script, not necessarily to propel the plot (which is how music functions in traditional musicals), but instead to provide fun, comedic relief and an opportunity for attendees to bob their head to some old school favorites.

What makes this absurd score, including one hit wonders that you might have forgotten about like “It Only Happens When It Rains” and “I Saw The Sign,” so successful is how the actors play into the ridiculousness of it all. Overly dramatic scenes from the movie are abruptly interrupted by actors belting songs by No Doubt or The Backstreet Boys that surprise the audience and leaves them chuckling in their seats.

(le) Poisson Rouge provides the ideal atmosphere for “Cruel Inentions” to thrive. The underground cabaret venue in the West Village has a cool, grungy atmosphere that perfectly encapsulates the “Cruel Intentions” vibe. The experience is complete with full bar and table service that extends before, during and after the performance.

Created by Lindsey Rosin and Jordan Ross, “Cruel Intentions: The Musical” will be playing for a limited engagement now through February 19, 2018 at (le) Poisson Rouge located at 158 Bleecker St.