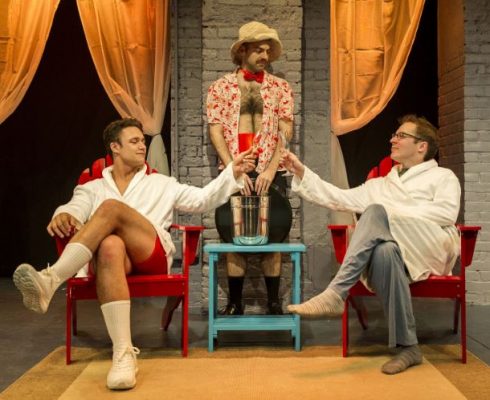 Peter Gil-Sheridan, Fordham College at Lincoln Center (FCLC) ’98, hedges quite a few bets on the idea that the audience will be laughing too hard at the absurdity of “The Rafa Play” to notice the depressing psychodrama that only sometimes rises above subtext. After all, the play is inherently bizarre: its premise centers on Peter Gil-Sheridan (Olli Haaskivi), a self-insert parodical version of the playwright, and the loving relationship he has with tennis superstar Rafael Nadal (Juan Arturo), as well as the various hijinks that ensue from an ordinary man dating a celebrity. The play is irreverent, unceasingly vulgar, over-the-top in its depiction of sex and might just offend anybody not clued into Gil-Sheridan’s specific brand of comedy. It may also be one of the most soulful and accurate depictions of LGBT life in recent memory.

Gil-Sheridan, a Fordham professor with years of playwriting expertise, makes the absurd easy to relate to. One scene might have Peter speaking to his friends about the altogether strange relationship he has with his husband “Rafa.” Others include sequences where a monotone waiter engages in a soliloquy about his unusual bathroom tendencies as a deconstruction of promiscuity or where feral cats are anthropomorphized into a metaphor for failed relationships. Indeed, much of the play is predicated around using its curious premise as a means to an end. Gil-Sheridan is much more interested in talking about personal and social issues than he is about constructing a narrative, but the aforementioned psychodrama only exists as far as he is willing to engage the audience in it, which he does mainly by making them laugh.

“The Rafa Play” does not skimp with its humor; Gil-Sheridan pulls out all the stops when it comes to making the audience erupt in uproarious laughter. The comedy is as absurd as the rest of the play, and Gil-Sheridan uses the play’s inherent ridiculousness to his advantage. A particularly memorable instance, for example, has the character of Rafa arriving from his tennis match on a motorcycle, posing with flexed biceps as gun sound effects emphasize his physique, and having sex with Peter in the middle of a crowded restaurant as onlookers take out their phones to capture the event. All the while, the fourth wall only exists as much as it is convenient for it to exist, and the characters will shoot glances or throw remarks remarks at the audience to double down on the preposterousness that ensues.

However, Gil-Sheridan does not care for cheap laughs. Every bit in the show has a purpose and a greater meaning that make them rise above simple absurdist comedy. In the second act, Rafa’s mother comes to visit him. Her distaste for Peter is obvious, referring to him only as Rafa’s “friend” and mocking his ever-mounting writer’s block. Peter and the mother’s sudden engagement in a growing altercation ends with Peter in a sling and with the mother’s clothing in tatters. The sequence is funny, to be sure, but Gil-Sheridan uses it to speak to the issues he finds important: the “erasure” of homosexuality in the eyes of masculine culture, the struggle that parents of LGBT individuals have with accepting their children, the insecurity one feels when in a relationship with someone perceived to be in another league, and so much more. Somehow, Gil-Sheridan manages to communicate these extremely resonant themes by using a fight sequence consisting of two actors running around and slapping each other.

The psychodrama really sets in, though, when “The Rafa Play” stops being about the romance and evolves into a metatextual comedy more concerned with the very existence of the play than it is about anything involving the tenuous plot. It ends up rivaling Charlie Kaufman’s “Adaptation” as a supreme example of deconstructive media, with Gil-Sheridan using the play as a front to talk about the multitude of issues that plague him in his personal and social life. It really needs to be seen to be believed.

It is ridiculous, it is hilarious and it never lets up. It is “The Rafa Play.”