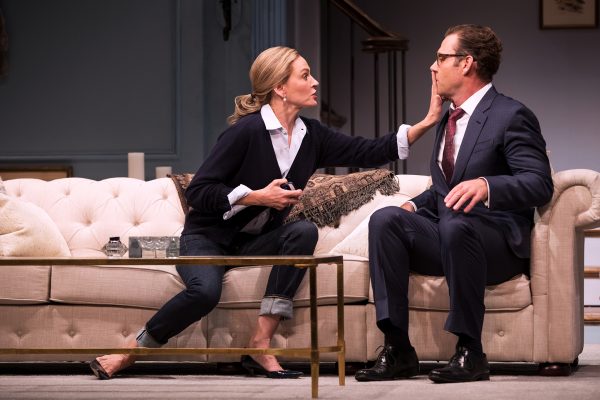 Pictured above, left to right, are Uma Thurman as Chloe and Marton Csokas as Peter in Beau Willimon's "The Parisian Woman." (Courtesy of Matthew Murphy)

After first premiering in Southern California in 2013, Beau Willimon’s “The Parisian Woman” has landed on Broadway, this time with an updated script and a Hollywood megastar in its leading role. Despite being written by the same man who is responsible for some of the most praised modern political dramas of our time (“House of Cards,” “The Ides of March”), this production of “The Parisian Woman” seems less like of an attempt to create a complex and meaningful political play and more like a way to mock the current administration under the guise of drama.

Uma Thurman makes her Broadway debut in this production as Chloe, a Washington D.C. socialite who spends her days volunteering at a charity she doesn’t care about or reading tacky vampire novels. Chloe has an open-marriage with Tom (Josh Lucas, “Sweet Home Alabama”), a tax attorney and secret liberal who yearns to make a name for himself in the Republican-run political climate of the Trump Administration. When a seat on the Fourth Circuit Court of Appeals opens, Chloe decides to do anything— lie, seduce, and even blackmail— to ensure that Tom “earns” the open seat.

“The Parisian Woman” seems to have an identity crisis, unsure of whether it wants to be a graceful comedy or an intense political thriller. Willimon has written a script that is full of not-so-sly digs at the President, jokes that make the audience do little more than chuckle out of recognition. References to “locker room talk,” “General Kelly” (who must certainly be White House Chief of Staff John Kelly) and Twitter being “good enough for the President,”  seem to be included in the dialogue purely for the sake of offering low blows at Trump.

Though the themes of greed, betrayal, lust and manipulation are also littered throughout the production, the characters are seemingly two dimensions with little depth. Moments after actors step onto the stage, one is able to predict exactly the arch Willimon plans to take them on, mainly because despite being a new production, “The Parisian Woman” feels old.

Thurman’s character is little more than a weaker version of Claire Underwood, Robin Wright’s character in Willimon’s “House of Cards.” Though Chloe is meant to be cunning, manipulative and calculated, her actions are so obvious and predictable that nothing comes as a surprise. Phillipa Soo perhaps has the hardest job in the play, forced to convince the audience that her depth-less character is suffering an insurmountable heartbreak. Though Soo navigates the moment well given the material, it is hard to make the emotions feel raw and real.

All in all, while on paper this concept and cast seems like the perfect recipe for a 2017 Broadway hit, the production doesn’t meet its full expectations. The show is neither surprising nor compelling, forcing theater goers to leave the performance with little to ruminate on other than the sheer amount of jokes packed into the 90 minute show.

“The Parisian Woman” is playing at the Hudson Theatre, located at 141 West 44th Street between Broadway and Sixth Avenue, now through March 11, 2018.