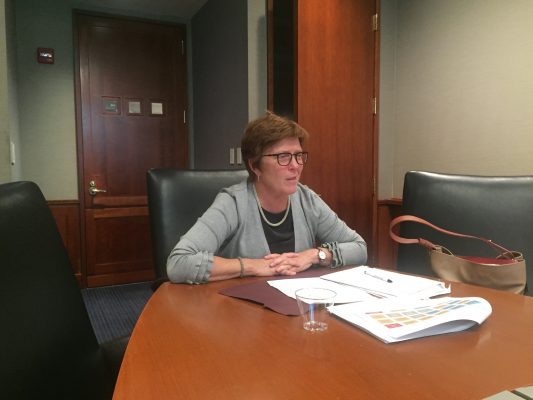 Like the climate-conscious polar bear, the university budget is making careful preparations for an uncertain spring. At that point, the finance team will report their proposal for the annual budget to the Board of Trustees, synthesizing months of research and ideas into one final presentation.

That is still a ways off. The team is now engaged with what Chief Financial Officer and Treasurer, Martha K. Hirst, describes as the season of adjustment—a time when long-term financial blueprints are redrawn, tuition is tabulated and budget gaps are evaluated. Several areas are factored into these negotiations, such as sources of revenue like tuition and fundraising, and expenses such as faculty salaries and financial aid. At times, the university may consider cutting or readjusting certain expenses in order to ensure the institution’s financial health.

“These are not draconian measures,” Hirst said in a press conference with The Observer on Dec. 4 regarding adjustments being considered. She said that the university is looking at all different areas of the university’s finances in order to diversify sources of revenue and ensure that the university has ample amounts of funds to comfortably handle its expenses.

This year, however, Fordham’s finances are under additional strain. They teeter on the brink of considerable harm as a consequence of the impending Republican tax bill and its many provisions which threaten to upend the steady budget that the university has maintained so far.

Having passed in the House and the Senate, the two variations of the bill are being hastily marshalled to the negotiating table, where lawmakers will stitch together the sections of both plans that they can agree on.

Meanwhile, a storm is brewing at university campuses across the country. Upon the tax plan’s completion, endowments will be sapped, graduate students will be hit with massive tax increases and thousands of students could find themselves struggling even more to afford higher education.

Though Fordham is unlikely to qualify for the 1.4 percent excise tax on private college endowments (the requisite endowment ratio of $250,000 or $500,000 per student towers over its approximate $47,600), the university’s future under the tax plan is anything but certain at the moment. The plan’s effects have the potential to be myriad and far reaching, according to Fordham business professor, Stanley Veliotis. Listed below are some of possible provisions that stand to undermine the university’s finances:
Tuition-Unfriendly Provisions
One of the benefits that Fordham grants to its professors and their families is allowing their children to attend the university tuition-free. While it comes at little to no expense for the institution itself, the discount can be an extremely valuable perk of the job for faculty members with undergraduate children, especially because those benefits are excluded from their taxable income.

That all stands to disappear with the ushering in of the new bill. Currently, the Senate’s version does not repeal the exemption, but the House plan opts for taxing the free-tuition benefit.

Along the same lines, the House bill is threatening to eliminate a section of the existing tax code that allows graduate students to receive tuition waivers from their universities without being taxed as income. Consequently, the estimated 145,000 students who receive this kind of aid will see their tax bill swell by approximately 400 percent according to a report by CNBC.

The combination of these provisions spell the future of college becoming less and less affordable for students, who will take out fewer loans and subsequently force universities to lower tuition. Fordham, who depends upon the $647 million it receives in graduate and undergraduate tuition every year could suffer greatly at the hands of this bill.
Disincentivizing Fordham’s Donors
Despite the fact that Fordham and institutions like it cover most of their yearly expenses with student tuition, the university also draws on a percentage of their endowment to cover the costs. Their ability to maintain endowment spending stems from their ability to accumulate donations, which taxpayers can deduct from their final bill.

“The more you tax something, the less you get of it,” Veliotis said. When governments tax things they find to be undesirable, such as cigarettes, they discourage whatever industry produces them. Charitable contributions have the opposite effect. If the government offers larger tax deductions for donating more to charity, people are more likely to contribute larger volumes of money.

Some of Fordham’s top individual donors are also the same taxpayers that would see their taxes decrease in a cut to the marginal tax rates under the new plan. Consequently, the value of pursuing deductions from taxable income could wane, and with less of an incentive to seek out larger deductions, donors could potentially scale back their contributions to the university or scrap them entirely. This could only be magnified by the suppression of the estate tax that is proposed in both chambers, who seek to remove the deductible motivation behind the charge, or even the tax itself. These reductions would result in a dearth of income from charitable donations that Fordham greatly needs.

Smaller donations are likely to be affected as well, given the current bill’s structure. Similar provisions from both House and Senate versions increase the standard deduction for individuals and joint filers. Assuming the smaller of the two passes, standard deductions grow from $6,350 to $12,000 for individuals and double that number for joint filers. Subject to this law, less wealthy donors who hardly itemize their deductions at this moment would see no tax benefit from donating, and could stop contributions altogether.
Repeal of State and Local Tax Deductions
Under the tax plan, state and local tax deductions are also threatened. A repeal of these deductions for federal taxes would harm the incomes of professors. Currently, Fordham professors receive a competitive salary according to the American Association of University Professors. The elimination of these tax deductions could be greatly harmful to Fordham because of living costs in New York City and the only recently solidified questions around salary and benefits. These negative effects could manifest themselves in harming professors’ abilities to afford living near Fordham, possibly jeopardized their ability to continue working at the university.

The repeal of these tax deductions could also reignite and add fuel to already contentious discussions between faculty and administration over salary. If the tax plan is implemented as is, the faculty could conceivably demand a pay raise to help them pay taxes on missing deductions for state and local taxes. Otherwise, Fordham could lose faculty to more affordable states or the private sector.
Isolated Taxing of Fordham’s Unrelated Businesses
For Fordham, income taxes are not a major factor, but income that the university makes through their unrelated businesses which do not further its expressed mission. The university operates these investments at both gains and losses. Currently, Fordham can subtract the losses from the gains as a way of paying less income tax on unrelated investments.

The Senate tax plan prevents this mixing of different aspects of unrelated business. Losses will be separated from income. As a result, Fordham will have to pay full taxes on them, further eroding Fordham’s income.
Taxing Interest on Advance Refunding Bonds
As is normal for everyone, income from standard investments is subject to tax. In some cases, the government incentivizes investments in order to draw financing to certain sectors by marking them tax free. One of these sectors is municipal bonds. At the present moment, the government allows charities like Fordham to piggyback on the special treatment these bonds receive like in the case of advanced refunding bonds, which can be used to pay off an outstanding bond in the hope of paying lower interest on the newly issued bond.

Both the Senate and House bills call for the discontinuation of these tax free treatment. The new plan would tax the interest on any further issued advance refunding bond, limiting the potential return to buyers of Fordham’s bonds, driving the university to pay a higher interest to these investors.

Though none of these provisions are guaranteed, Republicans have expressed little to no opposition to their inclusion within the final bill. And with each additional tax, deduction rollback and incentive cut, the cinch around Fordham’s purse tightens, and the task ahead of the university’s finance team grows more and more complicated.