McShane, Board of Trustees Will Discuss Charlie Rose’s Honorary Degree 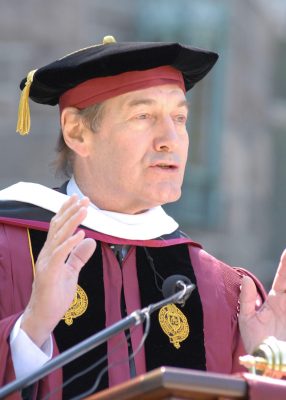 Charlie Rose, who was Fordham's commencement speaker and an honorary degree recipient in 2008, was recently accused by multiple women of sexual misconduct. (JON ROEMER/FORDHAM UNIVERSITY)

Following multiple accusations of sexual misconduct, broadcast journalist Charlie Rose was fired from CBS, PBS and Bloomberg. Now, Rev. Joseph M. McShane, S.J., president of Fordham University, is set to discuss the future of Rose’s honorary doctorate with the Board of Trustees.

Fordham awarded Rose an honorary doctorate in humane letters in 2008, when he was the university’s commencement speaker. McShane intends to discuss Rose and his honorary degree with the Board of Trustees at their Dec. 14 meeting, according to Bob Howe, assistant vice president for communications and special adviser to the president.

Accusations against Rose went public on Nov. 20 when eight women came forward in the Washington Post. In their accounts, they said Rose had made “unwanted sexual advances toward them, including lewd phone calls, walking around naked in their presence, or groping their breasts, buttocks or genital areas.”

“It is essential that these women know I hear them and that I deeply apologize for my inappropriate behavior,” Rose said in a statement to the Washington Post. “I am greatly embarrassed. I have behaved insensitively at times, and I accept responsibility for that, though I do not believe that all of these allegations are accurate. I always felt that I was pursuing shared feelings, even though I now realize I was mistaken.”

“I have learned a great deal as a result of these events, and I hope others will too,” his statement continues. “All of us, including me, are coming to a newer and deeper recognition of the pain caused by conduct in the past, and have come to a profound new respect for women and their lives.”

If the Board votes to rescind the honorary degree, it would be only the second time in the university’s history that Fordham has done so, with both instances due to sexual misconduct allegations.

In September 2015, the Board voted unanimously to withdraw the honorary doctorate of fine arts that the university had awarded Bill Cosby in 2001, when he was the commencement speaker.

“Fordham has never before rescinded an honorary degree,” a university statement issued at the time reads. “A recipient’s actions would have to be both unambiguously dishonorable and have a deep impact. By his own admission, Mr. Cosby’s sexual exploitation of women was premeditated and ongoing. Equally appalling is his longtime strategy of denigrating the reputations of women who accused him of such actions.”

“As a Jesuit university, Fordham could no longer stand behind the degree it had bestowed upon Mr. Cosby, hence this unprecedented action,” the statement concludes.

At the time, Fordham was joined in rescinding Cosby’s honorary degrees by Brown University and Marquette University, which is also a Jesuit institution.

WFUV, Fordham’s radio station, awarded Rose with the Charles Osgood Award for Excellence in Broadcast Journalism in 2015. WFUV has not indicated the future of this award and did not respond to a request for comment from The Observer.

Cosby and Rose are not the only people around which conversations of rescinding honorary degrees has surfaced. In May 2015, the Board of Trustees rejected a petition to revoke the honorary degree it had awarded CIA Director John Brennan in 2011 when he was the university’s commencement speaker. A group of faculty members under the name Fordham Faculty Against Torture pushed for Brennan’s degree to be rescinded due to the CIA’s use of torture and extrajudicial punishment during his tenure. Lingering feelings around the topic were brought back up when Brennan was named the Distinguished Fellow for Global Security for Fordham Law School’s Center on National Security at the beginning of this semester.

While the future of Rose’s honorary degree from Fordham remains uncertain for the time being, a look back at his commencement remarks offers a bit of advice that seems even more salient now.

“You must define and connect with your values,” Rose said at the time. “Know what you stand for the rock-hard-place beyond which you don’t go because it will destroy you. Without a personal honor code, you will be without a rudder. With it, you will have an anchor no matter what the temptation.”