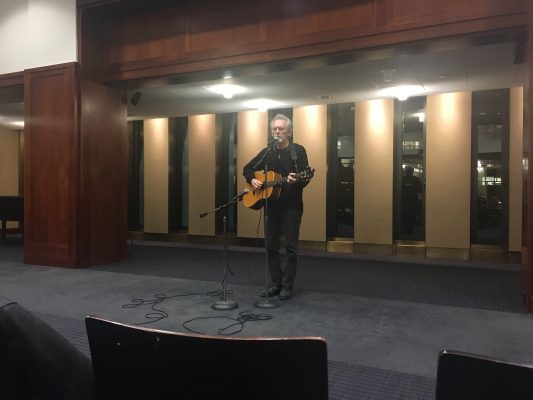 “A launch is a big deal in poetry,” Heather Dubrow, director of Poets Out Loud (POL), said at the organization’s most recent reading on Nov. 16. POL hosts approximately six readings on campus each year, but this one was of particular significance. The reading served as the official launch of the POL Book Prize Series, an international competition which receives hundreds of submissions annually. From these submissions, POL selected Gary Keenan and Michael Snediker as this year’s winners. Both Keenan and Snediker read selections from their work.

Dubrow continued that a poetry launch “celebrates the appearance of a book, it celebrates its author and often it’s the first time that there’s been a reading” by the author. And indeed, POL had ample cause for celebration; Keenan’s “Rotary Devotion” and Snediker’s “The New York Editions” were just published through Fordham University Press.

“Poetry books are usually thin,” Dubrow said, “but the list of people who make them possible makes ‘War and Peace’ look a little bit like a tweet.” She thanked a lengthy list of people who make the Book Prize Series possible, most notably the founder, director and editor of the series, Elisabeth Frost. Frost is currently holding a writing residency in France and consequently could not be in attendance at the reading, but Dubrow assured the audience that she was there “in spirit.”

Keenan’s “Rotary Devotion” was the culmination of almost 40 years of work. He explained that the earliest poem included was from 1979 and that the poems were slowly compiled and molded into what would ultimately become the present collection.

For Keenan, the writing process is anything but regular. Often, he said, he feels “a sense of surprise … [you’re] surprising yourself as you write.” Surprise might come to Keenan more easily than to the average poet, as many of the poems from “Rotary Devotion” are in fact linguistic improvisations. We will never know the extent to which each improvisation was later revised, but their rhythm and tone were strikingly different from Keenan’s other work. The improvisations featured some of Keenan’s most memorable lines: “I think of the soul as nature’s most implausible blossom.”

Keenan lives an artistic double life; he also plays and writes for the American String Conspiracy, a New York-based Americana group. At the end of his reading, he picked up his guitar from the front of the room and performed two Melville poems which he had put to music. Keenan described Melville as “our nation’s greatest prophet.”

The performance almost brought Keenan to tears. He explained that the violinist for American String Conspiracy, with whom he was working on arrangements for the band’s new album, had tragically passed away the previous Friday. Despite the visible emotional toll that playing exerted, Keenan was able to complete both pieces.

Snediker took a more literary approach to his work. He based much of “The New York Editions” off of the work of Henry James. Throughout his career, Snediker says he has been “in dialogue with American literature,” and often writes in direct response to prior American authors. Poetry, for him, is a way to “mediate between and abridge worlds,” between the literary past and present. One of Snediker’s earlier works, “Queer Optimism: Lyric Personhood and Other Felicitous Persuasions,” was a finalist for the MLA First Book Prize.

Much of Snediker’s work, like Keenan’s, was quite rhythmic. He scattered his poems with pauses, punctuation and short, one-word lists, as if reading along to some silent music. His language was simple, yet each word was carefully selected as to fit the line perfectly. Snediker’s speaker, in lamenting a past relationship, confessed, “I vanished twice … the world we want is eclipsed by the world we have.” He pondered, “What I would have given lives on as a rhetorical question.”

Snediker, as he read, became entirely lost in his work. After a gentle reminder from Dubrow that his time was expiring, he ended his reading earlier than he had planned or wanted to. But he concluded on an optimistic note: “I came into this world to be happy. So I will be happy.”