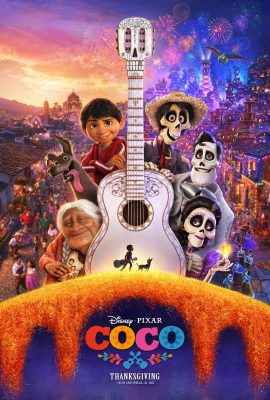 If you like Disney’s Pixar animated films, stories about culture and family, epic journeys through the land of the dead, or all of the above, then you absolutely must watch Coco this Thanksgiving.

Coco tells the story of a young Mexican boy named Miguel who wants nothing more than to be a famous musician, just like his idol, Ernesto de la Cruz. Unfortunately for Miguel, his family has a generational ban on all music after Miguel’s great-great-grandfather abandoned his family in pursuit of his musical aspirations. Fortunately for audiences, however, Miguel — in typical Disney protagonist fashion — refuses to give up on his dreams easily. The film is centered around Día de los Muertos — a Mexican holiday that celebrates the lives of deceased loved ones, and bridges the worlds of the living and the dead. Miguel’s passion leads him into a series of adventures — the bulk of which involve his deceased ancestors.

Adrian Molina, co-director and storyboard artist for Coco, visited Fordham as part of the “Pixar Coco College Tour.” Molina began his career with Pixar in 2007, working as a 2-D animator for Ratatouille, and later as a storyboard artist on Toy Story 3 and Monsters University. Molina gave some insight into the six-year-long process of creating the film, as well as his personal connection to the story.

In recent years, Disney has been working towards inclusivity, and increasing diversity in their films. Representation, however, is tricky for both those doing the representing, and those being represented. Molina explained that Coco’s makers were somewhat nervous about audience reception to the film because “within the Latino community, often times there have been projects where [Latinos] either haven’t been invited into the process” and have “been burned a number of times in terms of representation.” The Coco team was cogent of what Molina called a “healthy skepticism” from audiences; they conducted research by visiting various places in Mexico prior to writing the film, where they got to know the people and their cultures in order to portray them truthfully.

Being Mexican-American himself, Molina voiced just how close this film is to his heart, saying, “I want to create a film that is representative of the people I love, of my culture and the things that are beautiful about it.” His and the rest of the Coco team’s devotion to depicting such rich culture shines through the incredibly detailed animation, and their attention to informing audiences through visual storytelling.

Audience reception from non-Mexican and non-Latino communities was another concern for the filmmakers. However, by holding various screenings of different versions of the film, they were able to gauge when they were over-explaining or under-explaining, until they reached a point of balance. They did this by using moments of storytelling to “teach the audience, to make it a complication for the character, and also set up the next scene.”

Coco invites audiences to take part in the celebration of Día de los Muertos. In the creation process of the film, Molina says that “One of the things that we really wanted to lean into is how it’s actually celebrated in real life, which is with joy, and one of the things that’s interesting and uniquely characteristic of the way that Mexicans celebrate this holiday is it’s joyful, it’s celebratory; you bring the family together, and it’s not somber.” He explained that this particular perspective of death is the way in which Coco is “able to get the audience to see these relationships differently than society is used to.”

The cinematic experience is further enriched by the energetic, all Latino voice cast. Molina said, “what I love about this film, because it’s an all Latino cast, and because it is a film about celebrating this Latino family, this Mexican tradition, is that so many of them bring something personal to their interpretations and the characters that feel more real.”

Molina’s love for Coco is a sentiment being shared among Mexico, where the film has been out since late October, and is sure to be shared in the U.S. when the film comes out on November 22.