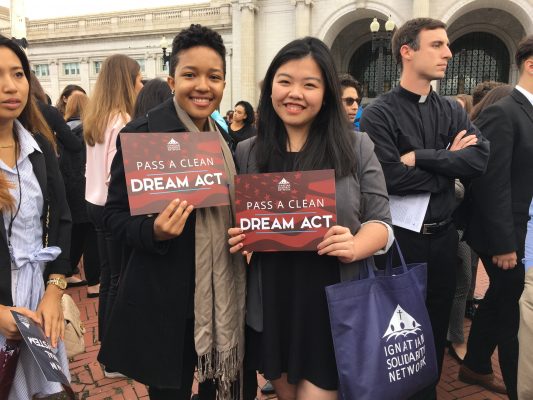 Fordham has participated in the Ignatian Family Teach-In for Justice at Capitol Hill for many years.

One of the most frequent questions I receive as a student ambassador is what it means to go to a Jesuit university and how those values have shaped my experience at Fordham. I often use this time to speak about the many wonderful things Fordham has to offer—from GO! projects to Urban Plunge, these program push students to live the mission and be men and women for and with others. However, as a senior reflecting back on my time at Fordham, I found that as work, internships, coursework and extracurricular responsibilities began to pile up, I had neglected my own commitment to living the mission.

Earlier this semester, I received an email from Erin Hoffman, associate director of campus ministry, urging students to apply for the Ignatian Family Teach-in for Justice (IFTJ). Rooted in the history of the Jesuit martyrs in El Salvador, IFTJ is an annual convening of Ignatian institutions and members to learn, reflect and advocate in solidarity for particular social justice issues.

This year’s theme was “Rowing Into the Deep: Magis Meets Justice” and the advocacy priorities were immigration reform, racism and mass incarceration. In an extremely divisive time in the United States where immigrants, people of color and other minorities have been dehumanized, degraded and demonized by politicians, I felt a calling to IFTJ as both a way to take direct action on key issues and as an opportunity to ingrain myself in the intersection between Ignatian spirituality and social justice.

I joined the Fordham delegation, made up of students, faculty and Jesuit scholastics with varying backgrounds, for this three-day conference. On the first two days, we heard from Fordham’s own Fr. Bryan Massingale on race in America, Sr. Patricia Chappell on privilege and complicity and Maria Stephan on nonviolence. Individual breakout sessions offered more reflection on topics such as LGBTQ+ rights, human trafficking, the death penalty and environmental justice. During our own reflection time, it was clear that the goals of IFTJ—to empower, re-energize, inspire, challenge and support, were met.

While the first two days of the conference were devoted to keynote and guest speakers, another important component of IFTJ is the advocacy portion. Delegates were encouraged to reach out to their respective representatives on Capitol Hill and lobby them to take specific action, such as supporting a clean 2017 Dream Act and racially-just criminal justice reform.

The Fordham delegation met with representatives of various states including Maryland, Georgia and New York. My advocacy meeting was scheduled with the Director of the Congressional Asian Pacific American Caucus (CAPAC). CAPAC, of which my representative Judy Chu is the chair, is a non-partisan and bi-cameral caucus which furthers the concerns and needs of the Asian American and Pacific Islander (AAPI) community.

For this meeting I chose to focus on immigration, an issue important to me on multiple levels as an Asian woman of color from Los Angeles. Not only am I a fourth-generation immigrant myself, I also grew up in a neighborhood in which there are a fair amount of undocumented immigrants, recently naturalized citizens and Deferred Action for Childhood Arrivals (DACA) recipients. Thus, the rhetoric that Trump has been using to describe this group of people—my friends, classmates, neighbors—has had an extremely visible impact on my community.

As CAPAC has been extremely vocal in regard to immigration reform, I used this opportunity to discuss ways in which the AAPI community can be better allies to the Hispanic community, which has been more directly targeted by the Trump administration, while also being aware of the ways in which undocumented AAPIs are also affected by the suspension of DACA.

Through listening to the keynote speakers, reflecting with the wider group, and participating in advocacy meetings, IFTJ reinvigorated the passion I have for social justice and the appreciation I have for what Fordham has taught me as a Jesuit institution. In the midst of writing a senior thesis and while balancing a full schedule, I’m grateful to be reminded of my own role in social justice, the need for direct action to pursue equity, and to continue to always pursue magis in justice.