Republicans Have Repudiated Roy Moore—What Took Them So Long? 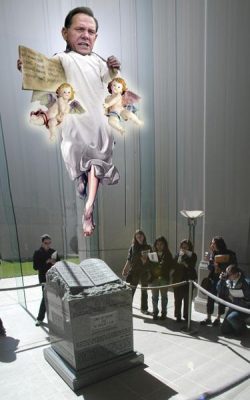 A satirical cartoonist's depiction of Roy Moore following his first removal from the Alabama Supreme Court in 2003. (DYSTOPOS VIA FLICKR)

To all of my Republican friends, I commend the lot of you for finally standing up to the madness of Roy Moore. If ever there were a Senate candidate worthy of the term deplorable, he would be such a man. Not supporting people who are accused of being serial child predators is a low bar, but congratulations for clearing it! I would say you cleared it spectacularly, but the degree of caution that came from folks like Majority Leader Mitch McConnell and President Trump on the issue when it first broke—emphasizing “if these allegations are true”—is quite the caveat. But alas, ultimately McConnell said that he believes the women. Still, clearing the bar is clearing the bar. However, as much as I am loathe to critique those who make good decisions, I just have to ask: what took you so long?

It turns out predation of minors is where many in the GOP draw the line.  I am very happy to see that, outside of the swamps of Alabama and Breitbart, this is deemed indefensible, but oh the lines that have already been crossed!

Roy Moore’s policy knowledge is incredibly weak, evidenced by his not knowing what DACA (the Deferred Action for Childhood Arrivals Program) was. Roy Moore between the years of 2007 and 2012 paid himself well over a million dollars for heading the charity Foundation for Moral Law, far higher than the reported in public tax filings. Roy Moore also led the charge in 2004 to keep segregationist language in the Alabama State constitution—arguing that the effort to remove particular lines in the state constitution that were put in place following Brown v. Board was a sleeper plot to guarantee a right to education.

Roy Moore has said the United States Constitution’s First Amendment protections do not apply to Muslims because Islam is a “false religion.” He has said that Muslims like Congressman Keith Ellison cannot serve in office—a clear violation of the Religious Test Clause of the Constitution in Article VI, Section 3. Roy Moore’s Foundation  has promoted the idea that President Obama is secretly a Muslim. He has said that he doubts President Obama is a natural-born citizen. Roy Moore has said there are entire communities in the Midwest—Illinois and Indiana in particular—under the control of Sharia Law. Yet despite his many sins, anti-establishment Republicans like Rand Paul, Mike Lee, and Ted Cruz had all championed Moore as a constitutionalist.

Roy Moore was removed from Alabama Supreme Court Twice. He was first removed for refusing to remove a statue of the Ten Commandments that he had installed, then removed a second time for refusing to go along with the Supreme Court’s ruling on same-sex marriage, both of which indicate Moore’s contempt for the Rule of Law and his willingness to put his personal values over the Constitution. In 2002, Roy Moore used a lesbian woman’s sexuality as basis to deny her custody of her children in a divorce case. Roy Moore openly associated with and frequently appeared on the radio program of a pastor who believes that gay and lesbian Americans ought to be executed and that Hurricane Harvey’s devastation was a product of the city having “a very very aggressively pro-homosexual mayor.” Perhaps most damning of all, Roy Moore has suggested that the Sept. 11 2001 terrorist attacks may have been a divine punishment from the almighty because the United States was distancing itself from G-d – which puts Judge Moore in agreement with likes of Osama bin Laden and the Westboro Baptist Church.

Prior to the damning revelations of child predation coming out, the only Republican to come out against Roy Moore was noted Jeff Flake—the champion of a traditional classically liberal Buckley-Goldwater Conservatism who has railed against President Trump. He recently said on the floor of the Senate that “When a judge expressed his personal belief that a practicing Muslim shouldn’t be a member of Congress because of his religious faith, it was wrong,” and “that this same judge is now my party’s nominee [for] the Senate from Alabama should concern us all.” And yet it seems that in today’s GOP, Jeff Flake is out and Roy Moore is in.

So to all of my Republican friends, congratulations on realizing that you have long had a cancer in your ranks, but in the name of all that is good and wonderful: what took you so long?