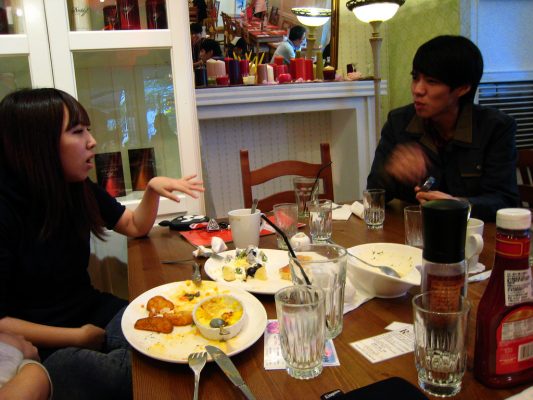 For many, Thanksgiving is a time to reunite with family. For all, though, family reunions inevitably mean family arguments and debates.

For some, the word “Thanksgiving” conjures rosy memories of food, friends and family. But we all know the unavoidable, uncomfortable main course to any true family Thanksgiving: no-holds-barred political debate.

You may have forgotten why you left for college. As you gear up for your holiday trip back home, prepare to remember. After months of polite discourse and general open-mindedness, it’s time to unlearn everything. You are about to approach a forum unmatched in hostility, a jury of your peers that get their news from social media and hate the term “liberal arts” because it has the word “liberal” in it. 2017 is a year steeped in controversy. A battle of wits and raised voices with your closest relatives is a dangerous game.

It would behoove you to come prepared.

What follows is an unofficial news briefing on the topics most likely to fill the air around the Thanksgiving table. I will offer my best advice on how to address each issue. If you don’t get damned to hell by your elder relatives before dessert, I’d consider it a good year.

The conversation may swing to the pros and cons of vaccination. Beware Auntie Anecdote, a reliable font of plausible stories that just happen to fall right in line with her arguments. Sure, a flu shot just might have turned the baby of a woman in her spin class into a homosexual, but don’t bother pressing for proof. Be careful not to let your guard down—Polio was, indeed, that bad.

Pros and cons of veganism will be touted, and warnings of your untimely demise from a red meat and cheddar cheese deficiency will be abundant. I know you’ll be itching to pull out your well-worn “Earthlings” DVD and play it. Eat your tofurkey and keep your head down.

To those who suggest their great-grandparents didn’t travel all the way to America to see it overrun by immigrants, a brief history of intercontinental ocean travel may be necessary. Start in 1492, just to cover all the bases.

No Thanksgiving is complete without a football game, and your challenge is twofold: parry indictments of disrespect and outright treason on the football players engaged in peaceful protest, and counter someone’s inevitable claim that the sport just isn’t tough anymore with all the increased safety rules. For the first, express curiosity as to the whereabouts of this place where people can actually demonstrate their discontent and everyone is happy about it. For the second … well, they say many types of brain damage are irreversible. Might not be worth your time.

Gay marriage may come up, even though it’s old news by now. Do what I always do and pose this question: Isn’t it kind of gay to think about all those gay people marrying all the time?

But as surely as big, inflatable Charlie Brown will loom ominously over the New York skyline on Nov. 23, the elephant in the room will have to be addressed at some point. Thanksgiving 2017’s most controversial topic of discussion is unavoidable, deeply personal and unequivocally orange. I’m sorry—I don’t know how to prepare you for this one.

It deeply saddens me that half of the United States of America could be so callous as to continue to support marshmallows on sweet potatoes. It’s a tragedy, but sweet potato partisanship in our country is worse now than ever. George Washington was right; it never should’ve come to this.

By now, the tryptophan will start to kick in, and you’ll finally get a break from the debates you never asked for. Talking to people we’ll only see a couple more times a year and defending our every last conviction to the death is the perennial struggle; beyond the classroom, the Thanksgiving table is the true proving ground. After leaving the politeness and thoughtfulness you’ve been taught in the dust, you don’t feel dirty. You feel alive.

Flinging mashed potatoes, threatening divorce and narrowly dodging disownment is what debating current events is all about. Execute your rhetoric mercilessly. Make your opponent’s submission quick and painful.

And have a happy Thanksgiving.