The Smart, Global and Diplomatic Way to Deal with North Korea 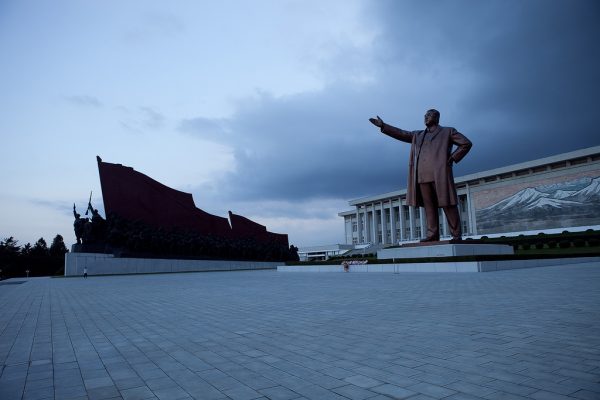 North Korea has been ruled since its inception in 1948 by the Kim dynasty, beginning with Kim Il-sung, whose likeness is depicted in this statue. (ROMAN HARAK VIA FLICKR)

The United States has recently been in a war of words with North Korea over increasingly erratic behavior from the rogue nation’s leader, Kim Jong-un, and the nation’s desire to create a nuclear weapon that can strike the United States. In August, President Trump vowed there would be “fire and fury” against North Korea if it were to threaten the U.S. This rhetoric further escalated in September, when Trump referred to Kim as “rocket man” during his speech at the United Nations General Assembly in New York, leading to North Korea calling the U.S. President a “mentally deranged U.S. dotard.” Given this increasingly heated and immature rhetoric, what is the best solution to provide a tough and smart manner to deal with North Korea?

The optimal way to deal with this ongoing international crisis is to ensure first that diplomatic means are always a priority. We must never invade or strike North Korea unless we are in complete certainty that the security and fate of us or our allies is directly at stake. In order to deal with North Korea most effectively, we must work to limit trade with the rogue nation and its Kim regime as much as possible. Contrary to what our president has said, the United States will not be able to cease with North Korea. However, in order to send a forceful message to the international community that provocative behavior must never be tolerated, we can most certainly limit it through a striking combination of trade restrictions and economic sanctions. Additionally, we must call on China to do more in its power to stand up to Kim’s rule and the very real nuclear threat over which he presides as the leader of North Korea. While China did sign onto United Nations sanctions designed to provide a gut punch to North Korea’s receipts from foreign exchanges, they have been criticized by some members of the international community for not being forceful enough against Pyongyang.

China is concerned about the possibility that there could be a large influx of refugees if Kim’s regime collapsed. Ninety percent of all international trade with North Korea is conducted with China. Of course, it is both unwise and unrealistic to claim that China will end trade with Pyongyang. That said, China can look to reduce its trade with North Korea to a certain degree without hampering economic growth in its own country. To ensure a robust economy, China does not need to be as concerned about international trade as once before. The economy of China has exploded in recent years due to the rapid growth of the country’s (relatively) new private sector.

I am not advocating for protectionism as a theory relative to government. I firmly believe in the need for strong and multilateral agreements with regards to global trade. That said, I simply believe that reducing trade with North Korea to some extent would send a signal perhaps more forceful than economic sanctions. Furthermore, illicit “cartels” between North Korea and China provide money to North Korea’s economy. The Chinese government must absolutely be very forceful about looking to halt such illegal activities. Many of these cartels have shipped drugs such as methamphetamine between China and North Korea. Kim’s nation profits off these cartels. As a result, a bilateral and diplomatic effort between the United States and China that seeks to limit traded items exported to North Korea whenever possible and halt cartels operating between China and North Korea is, for now, the most effective solution to dealing with this international crisis.