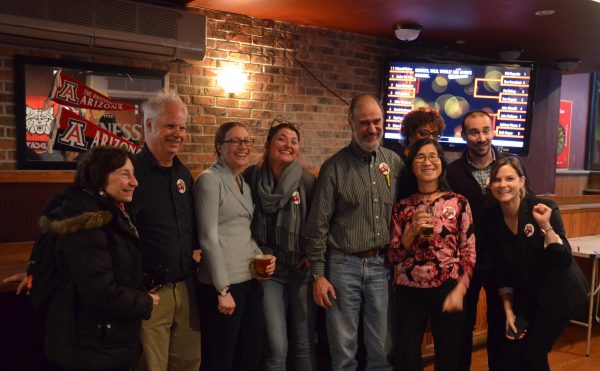 After a 13-month effort, Fordham contingent faculty have ultimately opted for representation on behalf of the Service Employees International Union (SEIU) following a landslide vote in favor of unionization. Of the 905 eligible adjunct and full-time non-tenure-track professors, approximately 94% voted to support the proposition in an election on which the university agreed to remain neutral. The News and Media Relations Bureau released a statement Tuesday, Nov. 14 announcing the conclusion of the referendum which had taken place over the past two weeks.

The brief announcement reaffirmed that the process, administered by the National Labor Relations Board, had been “full and fair,” adding, “The University leadership looks forward to working with SEIU on behalf of our employees.”

“As a full time lecturer at Fordham, I’m deeply invested in our campus,” Fordham professor Dr. Guy Robinson, Ph.D., said in a statement to Faculty Forward, an SEIU program. “But only with our union will I have input when it comes to making improvements here at our school.”

According to the organization, SEIU has teamed up with more than a dozen Catholic-affiliated universities since 2013, negotiating higher wages and improved job security for less protected members of university faculties. In a Sept. 27 email, university president Rev. Joseph M. McShane, S.J., noted that supposing contingent faculty voted in favor of representation, the university and SEIU will open up discussions for “two separate collective bargaining agreements,” presumably one for full-time faculty and another for part-time adjuncts. McShane also encouraged all who were eligible to participate in the election. In the end, 484 voted; 456 in favor, 28 opposed and 10 voided.

Following the announcement, members of Fordham Faculty United (FFU), an unofficial organization that supported the crusade gathered at Lincoln Park Bar and Grill near the Lincoln Center campus to celebrate the victory and reflect on their journey. Three years ago, it was just a handful of professors, assembling in secret at the New York Botanical Garden out of the vision of security cameras.

One of them was Dr. Hannah Jopling, Ph.D., an adjunct professor in the Department of Sociology and Anthropology. Early on she remembered being invited to meet the Provost, Stephen Freedman, Ph.D., where she argued that among the university’s traditions of social justice, it should include socially-just pay.

At the very beginning, Jopling recalled that she encountered a repeat pattern of experience among her fellow colleagues. “What I discovered,” she said, “was that we all felt isolated, underappreciated and underpaid.”

Those memories behind her, Jopling is reveling in the moment and in the strength of hundreds of contingent faculty voters. “I’m thrilled,” she said. “As I was looking over the list of names, I saw so many people I knew…To think back, it seemed like such a daunting number.”

Prior to recent negotiations, the university and SEIU had spent “a summer of intense negotiations” contending over adjunct and non-tenure-track representation, culminating in Tuesday’s final decision. Even earlier, the issue came to a head when the FFU staged an April 8 protest during Spring Preview, where demonstrators barged into a prospective student luncheon, triggering fire alarms as they exited through emergency doors. On May 19, McShane issued a statement declaring that he would not oppose the unionization of adjunct faculty.

In addition to students and tenure-track faculty, the movement had received considerable support from prominent lawmakers on both the local and national level. Mayor Bill de Blasio and Vermont Senator Bernie Sanders were among the few who sent letters endorsing the campaign.