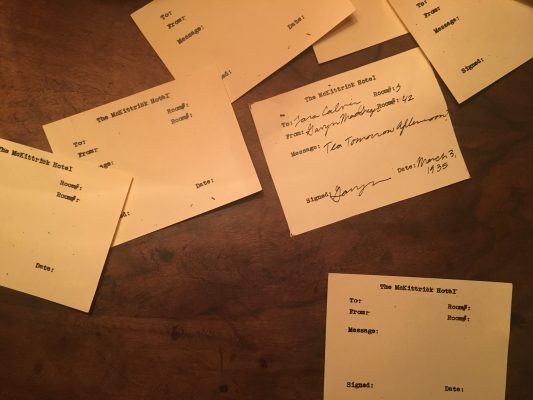 Six years after its debut, the popularity of the British theater company Punchdrunk’s “Sleep No More” has yet to fade. The site-specific production is a loose adaptation of Shakespeare’s “Macbeth,” in which the cast moves freely through the five floors of the fictitious McKittrick Hotel. Scenes are performed without dialogue, and the audience is asked to remain silent. Each room of the “hotel” is meticulously decorated, and audience members are encouraged to pick up and examine anything they choose in the 100,000 square feet of space.

“Sleep No More,” one of many immersive theatre productions put on by Punchdrunk, first premiered in London in 2003. It has evolved considerably since then, running for a short time in Boston in 2009 before settling into its present location two years later. The New York location, despite being described on the show’s website as a “legendary hotel” that was abandoned weeks before opening in 1939, is in fact a block of converted Chelsea warehouses.

Punchdrunk has based many of its productions off of literary works. In 2005, the company put on “The Yellow Wallpaper,” a one-to-one performance installation based off of the short story by Charlotte Perkins Gilman. Likewise, in 2007, it produced “The Masque of Red Death,” which was inspired by the Edgar Allan Poe story of the same name. Other productions include “The House of Oedipus,” in which “Oedipus the King” and “Antigone” run in tandem, “The Tempest” and “A Midsummer Night’s Dream.”

“Sleep No More” differs from all of these examples in that, rather than being a direct adaptation of a literary work, it is merely inspired by one. It is not called “Macbeth;” instead, its title comes from the famous line “Sleep no more! / Macbeth does murder sleep.” Additionally, the plot has been greatly simplified (and the ending was drastically changed), although this is of course necessary, as the play is performed without words or a linear narrative structure.

Perhaps the most easily discernible theme incorporated from Shakespeare is that of guilt. A bathtub, stained red with blood, occupied one of the hotel’s largest rooms. The production was dark, isolated, and claustrophobic; there was not a single window in the entire hotel, and each floor’s twisting corridors made it nearly impossible to maintain any sense of orientation. Consequently, the production felt quite confining and isolated, feelings that, as the play progresses, drive Macbeth to the brink of insanity.

The visual tone and general aesthetic of “Sleep No More” were highly reminiscent of of the 2008 Off Broadway adaptation of “Macbeth” starring Patrick Stewart (released on film by BBC in 2010), the entirety of which takes place in a Soviet-era military bunker. Despite their vastly different settings, both adaptations featured strikingly similar costumes, set pieces and lighting.

Beyond these few thematic references, however, “Sleep No More” featured few other connections to Shakespeare. The only scene explicitly recognizable from the original play was Lady Macbeth’s “Out, damned spot!” soliloquy, and there was a strange detective plot that was difficult to follow (something which would likely be less so with a second viewing).

Adapting “Macbeth” without dialogue is a bold and risky undertaking; the original play was written almost exclusively in dialogue. By removing such a foundational component of the play, the production chances losing much of its dramatic and emotive power. The production consequently straddles a fine interpretive line. While any adaptation takes creative liberties with its source, and indeed it must do so, if it strays too far from the original play the production risks, in the words of a Huffington Post review, becoming a “highbrow haunted house.”

Punchdrunk’s comparatively high ticket prices have, of late, been a subject of criticism. The company’s newest production “Kabeiroi” was described by The Guardian as a “luxury” theater product. Tickets ran at £110 a pair, and the show was so exclusive that “even critics couldn’t get a ticket.”

At “Sleep No More,” the most expensive ticket, which includes priority entry, a table reservation at the on-site Manderley Bar and a complimentary bottle of champagne, costs $325 (the least expensive, comparatively, costs $145). There is a definite “luxury” element that distinguishes “Sleep No More” from the average theater production, luxury that is incorporated as a core component of the audience’s experience.

There is an unsettling feeling, then, that the production uses “Macbeth” as a means to justify its ticket prices. The association of Shakespeare with high art and intellectual culture is what distinguishes “Sleep No More” from an ordinary haunted house, “highbrow” or not. Regardless of content, the Shakespeare brand imposes one to grant the production an inherent value and thematic depth that it would otherwise have to earn.

This is not to say that “Sleep No More” did not, to a degree, earn these merits. On many levels, including the set design, acting and choreography, the production worked extremely well. However, the limited scope with which it treated “Macbeth” seems somewhat exploitative, and the ticket prices do seem to further promote a culture of exclusivity around Shakespeare. There may not be much beyond the sound and fury of “Sleep No More,” but nonetheless the success of the production speaks for itself.