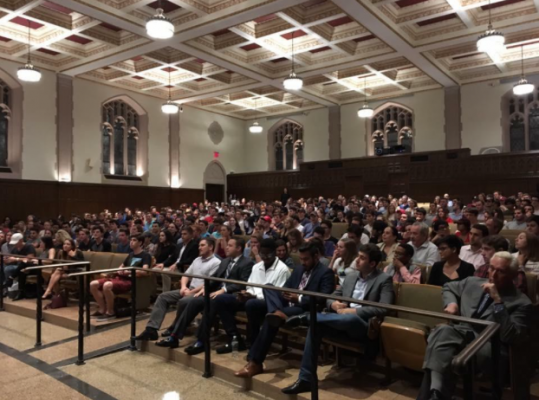 Roger Stone–bottom right. Jacob Linker seated one seat away from him. (COURTESY OF JACOB FLOAM)

“I revel in your hatred, because if I weren’t effective, you wouldn’t hate me.” – Roger Stone, quoted by the Fordham University College Republicans in their Facebook announcement post.

It was barely 30 minutes before Roger Stone was scheduled to speak in Rose Hill’s Keating Hall Auditorium on  Oct. 10 at the invitation of the College Republicans and there were fewer than ten people in the room. Public Safety did not expect a large crowd for the former Trump campaign adviser (just 57 registered as “Going” on the Facebook event page), but in any case, they were checking backpacks.

One of the only people standing around before the event was Jacob Linker, Fordham College at Rose Hill (FCRH) ‘18, and President of the Fordham Libertarians who originally came to the College Republicans with the idea of inviting Stone. Linker, who doesn’t always associate with the College Republicans, said that his primary motivation for inviting him was the “uneventful and less than active” atmosphere of Fordham’s political scene. He liked that Stone, who has been referred to as a “dirty trickster” by multiple media outlets, is a hatchetman, that his behavior is “a greater deviation from the norm” and that he drives people mad.

“When’s the last time the College Democrats got a speaker that got emotion out of the crowd?” Linker said. In other words, Stone’s tendency for provocation is exactly what Fordham University needs.

As Linker tried to enter the auditorium, a Public Safety officer stopped him to check his bag. He held onto it. “There is alcohol in it,” Linker said. It was a gift for Roger Stone. “What am I supposed to do?” Linker said rhetorically, backing down the hallway.

Stone acknowledges his love for a vodka martini and has attributed some of his most vulgar statements to its influence. When he tweeted in 2012 that former CNN contributor Roland Martin was a “stupid negro” and a “fat negro,” Stone digressed four years later on WBUR’s On Point that it was a “two-martini tweet” and that he regretted his words. Nevertheless, Stone has stood by his claim that his tweets are neither racist nor sexist despite calling former Florida representative Allen West a “know-it-all negro” and CNN commentator Ana Navarro an “Entitled Diva Bitch.”

Inside the auditorium, the few audience members were spread out among the several hundred seats. Caleb Rodrigues, Fordham College at Lincoln Center (FCLC) ‘19 sat in the first row. He too was eager to see Stone speak. According to Rodrigues, he had no idea Stone was coming until he opened an email statement from the University regarding the event. He thought it looked interesting and rode the subway up to Rose Hill.

At 5:01 p.m., two hours before Stone was to speak, Fordham President, Rev. Joseph M. McShane, S.J. had issued an under the wire announcement “allowing the talk to proceed.” McShane asserted that although many of Stone’s views “are demeaning to numerous individuals and groups,” antithetical to “Fordham,” “Jesuit notion,” and “civilized society,” he acknowledges his right to give his opinion. The College Republicans noted in their own statement that they were “pleased with the way in which the president was able to stand up for free speech.”

20 minutes to 7 p.m., students began to stream into the auditorium, carefully taking seats in the middle and right sections of the room. Protesters, many of them students from Lincoln Center, filed similarly into the left rows. Eric Chacon, FCRH ‘18 and a liaison with Fordham College Republicans, watched the groups wander in. He was satisfied with the turnout.

Chacon credited the large attendance to Stone’s political experience. “While most of us disagreed on the character of Stone, we felt that he was a very large historical and political figure,” he said. “I mean how many people do you get to say you heard that were interviewed by a congressional hearing? There’s a lot to be gained from listening to him.” He admitted, however, that at the time he had no idea what Stone was going to say or whether he had communicated that information with any member of the College Republicans’ executive board.

Stone was late in arriving to the event. At 7:25 p.m., he was quickly ushered through the doors of the auditorium, arms outstretched, beckoning cheers and hisses from the crowd, and selected a seat near the front of the stage. After introductions from Paul Cuesta, State Chairman of the New York Federation of College Republicans, the mic was then passed to Sebastian Balasov (FCRH ‘18), President of the College Republicans, who thanked Linker, the Stone team and the Office of Student Involvement for their help in seeing the event through.

The key to understanding Stone, according to Balasov is that “you have to separate Roger Stone the character from Roger Stone.” And anyway, “You can deal with Roger Stone for at least an hour.”

With that, Stone stepped on stage. He wore a loose-fit grey suit and a blue gingham shirt to match his pocket square. A dark tie constricted his adam’s apple. The breasts of his jacket puffed out like a bullfrog as he raised his arms again, reminiscent of but not an exact copy of the Nixon V sign.

“I am happy to be with you today. I am delighted with this turnout. I appreciate the kind words of the University President who hasn’t gotten a chance to get to know me,” Stone said, taunting McShane. Echoing Balasov, Stone said that McShane simply has him confused with the character he sometimes plays.

For the next 30 minutes, Stone managed to get through most of his talking points without looking terribly disturbed by protesters.

He began with his praise for President Richard Nixon, whose face he notoriously inked above the small of his back. As he listed the achievements of the former President, he was interrupted mid-sentence. “Richard Nixon–” Stone began. “–broke up the Black family!” a protester shouted. A roar erupted out from the left as Stone folded his fingers. “We are the party of Lincoln,” he said. “We are the party of equality and anyone who doesn’t believe that, they’re welcome to leave.”

“Don’t interrupt or you’re going to get fucking kicked out,” another student said, under his breath.

He transitioned to subjects of non-interventionism, bi-partisan cooperation, racism, marijuana legalization and the opioid crisis, before concluding on what seemed to be the question hanging on everyone’s minds: free speech.

“The old media,” Stone said, “the CNN, the CBS, the ABC, the three networks until 2016, they had a monopoly as it were on political discourse. If they said something didn’t happen, it simply didn’t happen…it is not till the Internet comes into full play, that it’s fully utilized in our politics, that you have the rise of a vibrant, robust, alternative media, which means you no longer have to take what CBS tells you is the only possibility. It’s up to you to surf the web, to find your own information to determine what you believe. I think this is the healthiest possible thing for our democracy which is why some on tech-left want to put the toothpaste back in the tube. ‘Oh we can’t let you be on Facebook. You’re fake news.’ Well who is to say who is, what is fake news?”

Soon after, the event shifted to a Q&A format. Stone took off his suit jacket as Chacon ferried a microphone between lines of audience members. While several questions covered the more political aspects of Stone’s opinions, such as the Robert Mueller’s Russia investigation and the future of the Republican Party, others grew increasingly irritated when some of their questions regarding his inflammatory, personal statements were sidestepped or otherwise completely denied.

“On what moral grounds do you think that any woman, LGBT member or perhaps relative of someone who was a victim of gun violence should be listening to you tonight?” one member asked.

“I think they do want to listen to me,” Stone said pointing at the center-right. “Thank God for the U.S. Constitution and the First Amendment. Is this compulsory for you to be here? You don’t have to be here.”

He spoke broadly about the two opposing camps that had formed in the auditorium as a reflection of a national epidemic. “Polarization already existed,” Stone said. “Politics is already vast and polarized. We should work constructively with people on the other side, and we’d lose this problem.”

It went on like this for 20 minutes, questions rapidly dissolving into thinly veiled jabs at one group or the other, until some ceased to be questions at all.

“Do you see Fordham as an institution aligned with your values and beliefs?” a woman said. It had to be repeated several times.

“The Foundation for Individual Rights and Education, a nonprofit group that overviews civil liberties on college campuses, has ranked Fordham University as the top ten worst college for free speech, and I want to say that shows how courageous you are to speak here despite opposition,” another said, jerking a finger over back at the protesters.

“I have no complaints,” Stone said in reply, waving a hand. “I’m delighted to be with all of you.”

Applause and condemnation lept as Stone made his final remarks, but soon after, students shuffled out of the auditorium. Eric Chacon was satisfied with the results. “People, they want to understand him more, how the political machine works,” he said. “Regardless of the emotions in the air, now we’re more educated.”

The emotions Chacon spoke of, however, were still hanging around the several pockets of students left in the auditorium. Stone, who had channelled the audience’s anger and approval, had moved upstairs to give an interview with public radio. Students turned their emotions on each other.

An argument broke out near the left section between two men and a woman.“If you don’t want to hear him, don’t come! Kick them out!” one of the men said.

Another about police body cameras: “They already have footage!” one girl said. “I can’t believe these people,” another girl replied turning her back.

The air was stale, and that night it appeared that this was as far as “dialogue” would go. Standing around, Colton Hillman, FCRH ’19, and Vice President of the College Republicans felt the need to reiterate. “People deserved a right to say the things they wanted to say,” he said. “A perfect event.” He’s hoping to feature more speakers like Stone this year.

In a statement to the Observer, the unofficial student coalition, Students for Sex and Gender Equality and Safety (SAGES), said that they were disappointed with the way the event had gone. “Inviting a speaker like Roger Stone can be and has been justified on the grounds of promoting free speech,” the statement read. “However, it seems to SAGES that this justification is a hollow cover for the true reason for his invitation, a thrill those who would invite him seem to get in provoking people they deem merely overly sensitive; people who in reality deal daily with structural oppression which Roger Stone blatantly, actively, and gleefully promotes.”

That being said, SAGES noted that following Oct. 10, “meaningful discussions sprung among students concerned about the presence of hate and bigotry on our campus, and our administration’s sanctioning of such hate.”