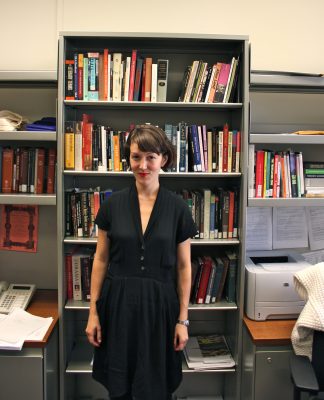 Although she is on leave this semester, English professor Shonni Enelow has done everything but slow down. As the new mother of a tiny baby boy, Professor Enelow has had a busy few months; not only was she awarded the 2015-2016 George Jean Nathan Award for Dramatic Criticism for her book “Method Acting and its Discontents: On American Psycho-drama,” but her play, “The Power of Emotion: The Apartment,” is about to open Off-Broadway at the Abrons Art Center. Professor Enelow talked to The Observer to discuss winning this prestigious award and the journey to get “The Apartment” on stage.

An actress first, Professor Enelow received her BA in theater with honors from New York University’s Tisch School of the Arts before going on to get a PhD in Comparative Literature and Literary Theory from the University of Pennsylvania. As she got more interested in playwriting and academic writing, Enelow used her training as an actress to influence the way she writes.

“When I am writing plays, I am always thinking about the character from the perspective of an actor, in addition to thinking about the text from the perspective of a writer,” she said. “The subject of my book is acting and I became interested in researching method acting because of my experience training as an actor. I wanted to think more about from a philosophical and historical and cultural perspective.” It was this book, “Method Acting and its Discontents: On American Psycho-drama,” that won Enelow the George Jean Nathan Award for Dramatic Criticism.

“I was thrilled… and very surprised,” Enelow said in response to her Nathan Award win. “What’s really very gratifying and flattering about being chosen for this award is that it’s an award that crosses between academic and nonacademic criticism. A number of scholars have won the award for academic books and also an even larger number of nonacademics theater critics who are writing for newspapers.”

The George Jean Nathan Award for Dramatic Criticism is annually awarded to an American writer who publishes the best piece of drama criticism during the given theatrical year in any given format, whether it be an article, book, essay or television broadcast. The winner is chosen by a committee comprised of the heads of the English departments of Cornell, Princeton and Yale and officially awarded by Cornell’s English department.

When describing why Enelow’s book was chosen to receive the prestigious prize, once won by other theater greats like Hilton Als and Charles Isherwood, the committee said she offered a “forceful and timely rethinking of the American theater’s dominant acting theory. In chapters ranging across Broadway and Off Broadway plays, Hollywood and experimental films, and classroom sessions at the Actors Studio, she probes the Method’s assumptions, identifies its blindspots, and tests it against the tumultuous politics of the 1950s and 1960s.”

“I was really very honored by that because I am very interested in writing, not just for academic audiences, but also for educated popular audiences,” Enelow continued. “For people who are interested in theater and in ideas, history and theory, but who aren’t necessarily just theater scholars.”

Now, theatergoers can see a different side of Enelow’s writing as her play, “The Power of Emotion: The Apartment,” begins its  limited run at the Abrons Art Center on the Lower East Side on Oct. 11. Inspired by a Alexander Kluge film of the same title, the director’s experience as a juror for a criminal trial and various operas including Wagner’s “Ring Cycle,” “The Apartment” explores the concept of emotion— how human watch, hear and perform emotion.

This production presents “The Apartment” in its third and final iteration. “The first iteration was really a workshop production where we were just starting to think about some of these ideas,” Enelow explained. “The second came out of our collaboration with the composer Taylor Brook. At that point, we were very interested in figuring out how to work with music, specifically how to think about opera, which was one of the elements that we were working on throughout.” Enelow and Brook, with the help of the new composer, then turned their piece into an over-the-top drama with intense operatic music.

This second iteration was premiered as part of the Under the Radar Festival, sponsored by the Public Theater, in 2015. After running at the La MaMa Club, Enelow and Brook set out to tweak the piece one last time, changing it based on their new interests and transformed it into its third and final version.

“That change from the second to third iteration was driven by [mine and Brook’s] new interest. It happened very internally from the needs of the project as opposed to externally,” Enelow said. “I was interested in doing something different, I didn’t want to do the same thing that I had done before. [Brook] had just gotten this really fascinating  experience as a juror on a criminal trial. That story of the criminal trial came and fit quite naturally into the scenes that we were already working with. It became a really great way to explore realism.”

Professor Enelow’s “The Power of Emotion: The Apartment” is running at the Abrons Art Center until Oct. 21.