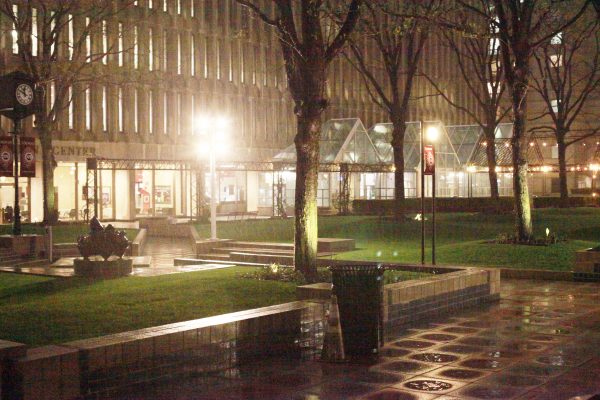 Robert Moses was still planning, arguing for a Long Island-Manhattan Expressway down the middle of 30th Street as he sat in a dark suit across from WNET reporter Robert Hanson. It was 1977, and in two years, Moses would be dead, leaving behind projects, such as the Cross-Bronx Expressway that reshaped the region, and a reputation for ruthlessness that often manifested itself in racism. As Hanson said, “Robert Moses has been praised as the man who got things done and damned as the man who didn’t care what it took to get them done.”

As a part of their televised interview, Hanson and Moses discussed neighborhood preservation.

“Now, listen, let’s be a little sensible about this thing,” Moses said, in an accent that seemed to be ripped from 1920s New York. “How do you visualize, if you were around, the area that we cleared out for the Fordham expansion downtown? They needed the college. They couldn’t put any more people up at Rose Hill in the Bronx. And they were working with a group of people who were interested in what is now known as Lincoln Square. Opera, Performing Arts, every kind of arts. And we did it for ‘em.”

And then he leaned forward in his chair. “Now I ask you, what was that neighborhood? It was a Puerto Rican slum. You remember it?”

“Yeah, well I lived on one of those streets there for a number of years, and I know exactly what it was like,” Moses said. “It was the worst slum in New York. You want to leave it there? Why? On account of neighborhood business? Christ, you never could have been there.”

While Moses and Hanson parted ways that day, their debate on the neighborhood destroyed to build Fordham’s Lincoln Center campus would rage on through the present day.

A “Friend of Fordham” to some and a symbol of racism to others, Moses sits at the heart of Fordham Lincoln Center’s own debate over controversial statues. The memorial to him, however, currently sits in storage, with the debate taking a backseat to national and local discussions over statues such as those of Confederate leaders and Christopher Columbus.

If things go according to plan, however, the Fordham community will likely debate Moses again.

The controversy over Fordham’s memorial to Moses was sparked on campus almost immediately after it was installed.

On the night of Wednesday, Nov. 18, 2015, members of the Fordham community gathered on the Outdoor Plaza, officially called the Robert Moses Plaza, to hold a vigil for the victims of the terrorist attacks that had taken place in Paris, Beirut and Baghdad a few days prior.

Their ceremony, however, was soon disrupted by the sound of jackhammers reinstalling the memorial to Moses that been temporarily removed for the construction of the Law School and McKeon Hall. At the top of it was the phrase “Friend of Fordham.”

The next day, Beatriz Martinez-Godas, Fordham College Lincoln Center (FCLC) ’18, was walking across the plaza when she stopped by the plinth.

“I was very disappointed and a little bit embarrassed to be walking around with Fordham on my chest,” Martinez-Godas told me in November of last year. She referred to the plinth as, “honoring the man who displaced and who was racist towards a large amount of minorities.”

That moment spurred her to mobilize other students to address Moses’ legacy and set off a debate that would continue for the next year.

The Campaign for Removal

In the days following, Martinez-Godas and other students distributed fact-sheets titled “Robert Moses: Who He Was And Why It Should Anger You.” It concluded with the statement, “To us, students of color and allies, the statue serves not as a memorial of the man who donated the land our institution is built on, but as a reminder that the racism the people displaced for it underwent is still something we face today here at Fordham.”

Counternarratives, however, were soon presented in the Fordham community. Some faculty emphasized that Fordham worked with the people displaced to construct the campus, financially compensating them and helping them resettle elsewhere. Others drew attention to social justice initiatives on campus to help local communities, such as the Dorothy Day Center for Service and Justice, which they believe helps address Moses’ unsavory legacy.

This debate came to a head on April 6, 2016, when the History and Urban Studies departments teamed up to facilitate a dialogue on Moses. By that time, the plinth had been covered in plastic tarps due to the tensions it caused.

“As a historian, I don’t like the sanitizing,” said Roger Panetta, visiting professor of history, in reference to calls to remove the memorial. “I think the Moses statue, whatever we do with it, really should represent all of the complexities of the issues we’re talking about.”

Panetta’s argument won out. Two weeks later on Apr. 18, United Student Government (USG) voted to keep the plinth and add a plaque to it that “would acknowledge the many communities that were displaced by Robert Moses through his urban planning.”

Martinez-Godas, however, was not fully on board.

“It’s great that you’re honoring the people who were displaced and you’re acknowledging that part of history, but the plinth still says ‘Friend of Fordham,’” she said. “And that still has a greater message than adding that plaque as an afterthought.”

Keeping the plinth was defended by an argument that has often been used in recent discussions of controversial memorials across the country.

“We felt that if we are to vote to remove the plinth completely and change the name entirely, we are essentially erasing a part of our history,” said Yint Hmu, FCLC ’17, Former USG President Pro Tempore and Former Chair of USG’s Against Racism Committee.

The Removal and the Eventual Return

By voting for the plaque, USG actually gave Martinez-Godas exactly what she asked for, if only temporarily. In November of 2016, the plinth was “moved to storage to beat the winter weather while [awaiting] the draft of the statement to be attached to it,” according to an email Vice President for Lincoln Center Brian Byrne sent to the Observer in November of 2016.

The plan is to eventually reinstall the plinth in the lower plaza, where the university intends to replace “most of the parking area with a park,” pending city approval, according to Byrne. He also noted that the university is planning on renaming Robert Moses Plaza, scrubbing Moses’ name from the only thing on campus still bearing his name.

But whether he is praised or scorned, Moses and his legacy will always be inextricably linked to Fordham Lincoln Center’s history and very existence. And while there may be a plaque added to the plinth when it returns, it is sure to spark debate over his history anew, carrying on the discussion Moses and Hanson had 40 years ago.

“Now we spent an awful lot of money moving people, and a good many people criticized this,” Moses said, leaning back in his green office chair. “A fella wanted to go over and live with his sister-in-law’s family in Jersey City. We paid the freight to move them over. I think we went too far in doing that. But we made them all happy.”

But soon he was incensed. “And do you know that after we opened that area there with the tremendous ceremony and all that kind of thing, after that, there was not one, single, goddamn letter I got from any of those thousands of people who were in there,” he said, snarling every word. “Were they unhappy? What the hell were they unhappy about?”