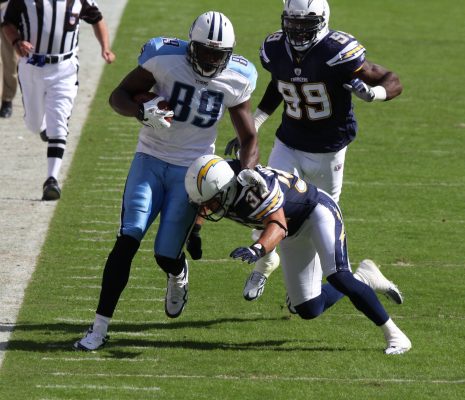 Concussion are becoming more and more of an issue in sports, particularly football, as there is a dramatic rise in CTE recordings. (NATHAN RUPERT/ THE OBSERVER)

Chronic Traumatic Encephalopathy, more commonly referred to as CTE, is a degenerative brain disease that is thought to be caused by repeated trauma to the head. Any athletes in contact sports can be affected, though the disease is most common in football players. A study done of 202 deceased football players brains showed that 110 of them had CTE — 111 of those players played in the NFL.

Former New England Patriots tight end, Aaron Hernandez, is the latest professional player to be diagnosed with the disease. He committed suicide at the age of 27 and his autopsy revealed that he had Stage III CTE. With only four stages, the fourth of which being the most aggressive, it was almost frightening to see how far CTE had progressed in such a young player. It is possible that CTE was responsible for Hernandez’s aggressive behavior near the end of his life, but we will never know with certainty if CTE played any role in that.

Tau is a protein that is found inside of everyone’s brain that essentially helps everything stay together. Microtubules, held together by tau, are like the brain’s “transportation system.” When one gets concussion after concussion and repeated trauma to the head, the microtubules break and tau is able to float around aimlessly. The protein starts to connect with other proteins and clump together. Soon, these clumps spread throughout the brain and start a life of their own, so to speak. They continue to grow throughout the brain, and there is no way of stopping it. However, this spread is long and slow, which is why it can take a long time to show up in some patients.

The first recorded signs of CTE appeared in 1928 in a group of boxers. More than 75 years later, in 2005, former Pittsburg Steeler Mike Webster was diagnosed with the disease.

Studies have also shown that CTE can affect people who did not play sports into their teens or early twenties. Repeated brain trauma, like concussions, causes a buildup of the abnormal protein called tau. This buildup does not occur immediately after a significant brain injury — it can take several years for CTE to impact the brain, but that does not happen in every case. When it eventually does hit, it can cause memory loss, control problems, aggression, depression and dementia. Tau buildup is also associated with Alzheimer’s disease, but CTE and Alzheimer’s affect different parts of the brain. Generally, CTE starts earlier than Alzheimer’s—signs of CTE can start to show up in a person in their late 20s—30s, when changes in their mood begin to occur.

There are not any specific ways to prevent CTE yet, because there is so much that the world does not know about the disease. However, this preseason, Luke Kuechly, a linebacker for the Carolina Panthers, has started to wear a Q collar, an experimental device that is said to help limit concussions. It is designed to limit the space in the skull that the brain has to move, which in turn helps limit concussions.

The NFL has given a lot of money to support brain research—particularly CTE. New helmet technologies are trying to be thought of, but there is no news yet about safer helmets. Sensors are being placed inside some helmets of high school students to see if the severity of hits can cause any immediate damage, and to provide further research as to how the brain responds to a hit of that magnitude. However, this testing is only happening in college and high school, as the NFL claimed the results were not accurate. It’s not only the NFL that needs to look out—since signs of CTE are starting to show up in younger patients, high school and college football programs also need to take measures to try to prevent CTE.