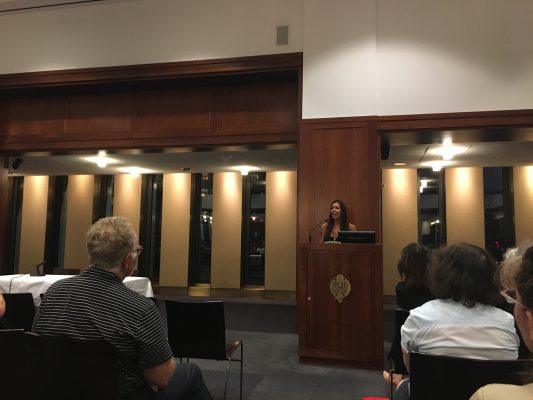 Poets Out Loud held its first reading of the semester at Fordham Lincoln Center on Sept. 25. (COURTESY OF JEFFREY UMBRELL)

“I learned language from eggs,” said poet, novelist and editor Melissa Castillo-Garsow,  explaining the significance, for her, of everyday objects. “I learned meaning from eggs.” She was reading from one of her poems here at Fordham with Poets Out Loud, an organization, sponsored by the office of the Dean at Fordham College Lincoln Center, that hosts poetry readings throughout the semester.

The Sept. 25 reading featured Castillo-Garsow and Donna Masini, who is a professor of English at Hunter College. This was Poets Out Loud’s first reading of the semester; director and host Heather Dubrow took the opportunity to welcome those who were attending for the first time. “If it is the first time,” Dubrow said, “we hope and trust that it will be the first of several.” Dubrow teaches English at both the Lincoln Center and Rose Hill campuses.

Castillo-Garsow, who received her master’s in English from Fordham in 2011, was the first to read. An unapologetic “bad girl poet,” much of her work explored her Latin-American heritage. She wrote with a clear and refreshing voice, and her passion for her work was immediately evident. Among the poems she read was one that she had only written three days prior, which she read from a notes document on her iPhone. It was still “raw,” she admitted, and a little “cocky.”

When asked if she regularly wrote on her phone, as opposed to with pen and paper, Castillo-Garsow replied that she only does so as a last resort. “If that’s all I have on me,” she said. “I’d rather get the thought down than lose it completely. But I should be embarrassed not to have a notebook on me sometimes.” Often, she will first hand-write a draft and then type it into her phone or computer, but prefers not to be “weighed down” by digital technology.

Among the most memorable features of Castillo-Garsow’s poetry was her liberal use of Spanglish, an informal blend of the Spanish and English languages. “I got a lot of suggestions from different professors to really minimize my Spanish usage,” she recalled. “And then I just found different professors.” To those who did not understand Spanish, Castillo-Garsow said she hopes they “get something out of [her poetry] as well, whether it be that experience, or learning something about living in those multiple languages.” She hoped to share the perspective of a non-English speaker in an “English-dominant world.”

Donna Masini’s poetry combined her loves of both writing and cinema. References to film scattered her work, through lines like “All year I’ve been watching myself flicker,” titles such as “Noir Sonnet” and short snippets inserted between poems that she called “deleted scenes.”

“Poetry’s so physical,” Masini said. “It’s all about the breath, the feeling of it … I just love that.” For her, creating poetry with physicality is not an easy process. “I’m not someone who writes a lot and writes quickly … I really work hard on my poems.” Like Castillo-Garsow, she tries to carry a notebook with her at all times. She recalled, “Several of the poems that I read today, I just found in a notebook.”

Masini understated the importance of meaning in poetry. “Many of the poets I loved in college or high school,” she said, “I loved before I had any idea what meaning was, and interpretation, I just loved saying the words.” She often gets engrossed with the sound of a poem she is writing  before realizing that it “doesn’t mean anything.”

Castillo-Garsow felt similarly. “I’m very literal,” she said. “I have to really see if there’s something there beyond just what is the literal meaning. That’s what makes it, for me, a poem, versus some other random scribbling.” In uncovering the “meaning” of her work, Castillo-Garsow said, “I really have to work, personally, to pull those [meanings] out, because that does not necessarily come naturally to me … I’m not naturally poetic.”

Masini, though, made distinct the difference between being a poet and being “poetic.” In her undergraduate classes, she says to her students, “If I say something is ‘poetic,’ that’s not a good thing. You don’t want to be poetic, you want to write a poem.”