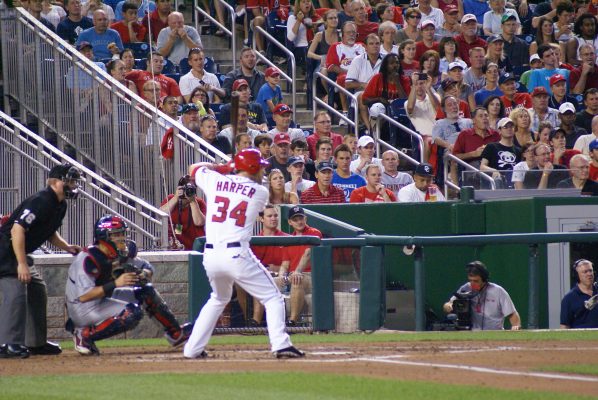 It’s that time of year again: October Postseason baseball. The mood of regular season baseball seemed as intense as the playoffs for almost all of September, but the anticipation surrounding the upcoming month is even stronger than it has been lately. All baseball fans have their own opinions and biases but here are my predictions for the MLB Postseason.

Starting pitching will make or break a Wild Card game, which would determine the fate of a team’s entire season. The Yankees know this all too well, since they were shut out of the 2015 playoff game when the Houston Astros started ace Dallas Keuchel. That being said, the Yankees are not taking any chances with erratic Masahiro Tanaka and will start young ace Luis Severino, who owns a 2.98 ERA this season and has struck out 230 batters in 193.1 innings. The Twins will counter with their respective ace, Ervin Santana, holder of a 3.28 ERA this year. Severino is slightly more consistent than Santana, as 23 of his 31 starts have been quality outings, while Santana only has 21 of his 34 starts. Severino has also been better lately: his September ERA was 2.10, while Santana’s was 3.31. So, the Yankees have the edge to advance to the Division Series.

The Diamondbacks enjoy the same pitching advantage over the Rockies that the Yankees have over the Twins. Zack Greinke will start the do-or-die game for the Diamondbacks, while Jon Gray gets the nod for the Rox. Greinke has a 3.20 ERA this season, while Gray’s is 3.67, which is too close to 4.00 for comfort. Greinke also has an advantage over Gray in WHIP (walks + hits per inning pitched, which I think is the second-most important stat for a pitcher: his is a measly 1.01, while Gray’s is a concerning 1.30. In this scenario, I see Arizona advancing to the Division Series.

As a Tri-State Area native, it pains me to write my belief that the Yankees will lose and the Red Sox will win; but this is the outcome I find most realistic. The Yankees’ rotation behind Severino isn’t great. Trade deadline acquisition Sonny Gray has not been the pitcher that General Manager Brian Cashman had hoped for, holding a September ERA of 4.58. The rest of the rotation has been too inconsistent to be reliable. Sure, the offense is heating up, with Aaron Judge coming out of a slump and Jacoby Ellsbury being productive atop the lineup, but the Yankees have had too many offensive cold streaks for me to believe they will beat the Indians. Cleveland just went on a record-breaking 22-game win streak, and momentum is a big part of Postseason baseball. Anchored by consistent starting pitchers Corey Kluber and Carlos Carrasco, plus red-hot offense from amazing defensive shortstop Francisco Lindor and home run machine Edwin Encarnacion, the Indians have the edge over the Yankees to move forward.

Meanwhile, I have a problem with the Astros’ depth in many areas. After Justin Verlander and Keuchel, the rest of their pitching staff’s ERA was over 4.00 this year. The Red Sox have three stellar starters in potential AL Cy Young Chris Sale, Rick Porcello and Drew Pomeranz. Hitting is tougher here; both teams have a selection of above-average hitters. Boston enjoys the likes of youngsters Andrew Benintendi and Rafael Devers, not to mention .295 hitting Dustin Pedroia, but Houston has bragging rights over (potential AL MVP) Jose Altuve, plus Yuli Gurriel and Carlos Correa. So while this race is tight to call, I’m calling Boston because of their superior rotation.

The National League West rivalry between the Dodgers and the Diamondbacks will be intense, especially with former Dodger co-ace Greinke assisting Arizona. The fact of the matter, however, is that the Diamondbacks are not very good past him. It would be wrong to fail to mention perfectionist Paul Goldschmidt’s legacy, but aside from him, the Dodgers have the advantage in every other position except outfielders, not to mention the deepest rotation and best closer in baseball. With the highest regular-season record in baseball, the Dodgers have the edge here.

Speaking of deep rotations, Washington’s owns a sub-3.00 ERA three pitchers in, while only one of Chicago’s starters is below 3.50 in this category. (Though it is worth noting that potential Cy Young winner and Nationals ace Max Scherzer is day-to-day with a hamstring issue.) Five Nationals are hitting .296 or higher, while only one Cub is even close: Kris Bryant at .295 (Albert Almora Jr. is day-to-day after crashing into a wall). The Cubs just aren’t the world champions they were in 2016. So, I see the Nationals advancing here.

While the Indians have been better lately than the Red Sox, the Postseason will give the Red Sox time to readjust and figure out what went wrong. To me, what went wrong for them was inconsistency, especially from ace Sale. He is typically worse during the second half, but I really believe he will comfortably lead this team back into form, backed by the rest of the team’s solid rotation. Veterans Pedroia, Hanley Ramirez and Jackie Bradley Jr. will provide the footing this team needs, while the Indians will falter as they did last year, but earlier. Cleveland’s hitters, though more than decent, do not have the chops to compete with Boston’s. I expressed faith in Encarnacion’s homer-hitting ability earlier in this piece, but because of his low batting average, I do not believe he – or outfielder Jay Bruce, who has the same problem – will make it past the first round; they are just too unreliable. I see the Red Sox going to the World Series.

Both of these teams are deserving of the National League Pennant this year. But the Nationals have been fighting for too long to make it to the World Series. Since the franchise’s inception as the Montreal Expos in 1969, it has yet to win the National League pennant. Close to 50 years of waiting can do a lot for a team, especially since it has won its division four of the past six seasons. Though Los Angeles has not made it to the Fall Classic in almost 30 years, the Nationals are just a hungrier team this year. I suspect that the Dodgers will lose their motivation and momentum inspired by Clayton Kershaw’s yearly October breakdown (he owns a Postseason ERA of 4.55 and record of 4-7). I could compare numbers here, but these teams are both so good that I’m inclined to predict solely based on instinct, and my gut tells me that Washington wants the crown more than Los Angeles does.

Most of you are probably angry with me at this point for predicting that all three teams with 100 or more wins will choke. But the art of the choke is strong (just ask Kershaw, Judge or the 2016 Indians). So why do I believe the Red Sox, back-to-back AL East champions, will fall to the choke? The answer is simple: because they’ve done it so frequently. Sale’s second half was noticeably worse than his first. Left-hander David Price’s Postseasons have historically been far worse than his regular seasons (he owns a 5.54 career Postseason ERA). First baseman Mitch Moreland batter below the Mendoza line during two separate months this year, but batted .342 in between those months. The list goes on. I believe the Red Sox have the skills and the numbers to make it as far as the World Series, but since they tend to disappoint after heating up, I suspect that is what will happen here.

So then the question becomes: why will the Nationals not choke? My answer, again, is simple: because they haven’t this year. The Nationals have kept a steady winning pace all season. Unlike the Cubs, Dodgers, Indians and, yes, the Red Sox, Washington has not yet gone on an uncharacteristically hot or cold streak. Nor has any of its lineup: superstar Bryce Harper, Postseason monster Daniel Murphy, third baseman Anthony Rendon, and co-aces Scherzer and Stephen Strasburg have been consistent all season (save a month out for Harper for an injury). This team, quite frankly, has not slowed down since it started out atop the NL East this year. The 2017 Nationals are a standout team. They will be world champions come November.