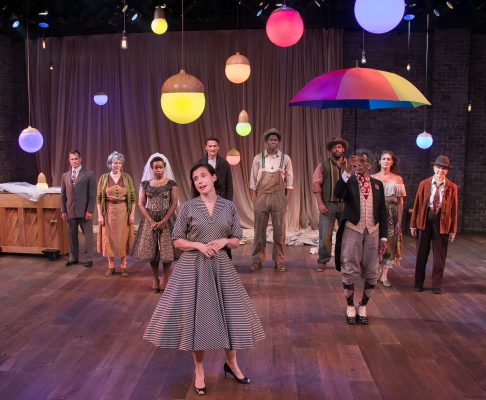 Hannah Cabell leads CSC's production of "As You Like It" now until Oct. 22. (Copyright Lenny Stucker/Courtesy of Classic Stage Company)

“As You Like It” follows Rosalind (Hannah Cabell) as she is forced into exile by her uncle, Duke Frederick (Bob Stillman), just as she falls madly in love with strong, handsome Orlando (Kyle Scatliffe). Bringing her cousin Celia (Quincy Tyler Bernstine) and the court jester Touchstone (André De Shields) along with her, Rosalind assumes the identity of a man and hides out in the Forest of Arden until she can return to the kingdom and be with Orlando for good.

Schwartz’s original jazz score paired with Ann Hould-Ward’s costume design and the minimalist set leaves the exact setting of this new production ambiguous. We are visually brought into the modern era, with characters wearing overalls, plaid shirts, and long skirts, while lyrically still in Shakespeare’s Elizabethan England for most of the production, as the script is unchanged. Schwartz’s music is where these two points intersect, pairing dense language with light ditties that are enjoyable to the ear.

CSC’s newly redesigned theater, with seats wrapping around three sides of the set, promotes audience interaction and engagement in a way that is reminiscent of theatre during Shakespeare’s era. Doyle uses this set up to his advantage, directing performers to connect with audience members from the moment they walk on stage. CSC has successfully made Shakespeare’s Globe come alive again in downtown Manhattan.

Ellen Burstyn makes her notable return to the New York theatre scene with this production, playing the melancholic Lord Jaques. While her talent is undeniable, it seems to be wasted during the first portion of the play. She silently sits on a trunk, watching the actors move around her, without interacting with anyone. This staging seemed to be more like an effort on behalf of Doyle to constantly remind the audience that the Academy, Emmy and Tony Award-winning artist is a part of the company, rather than to actually highlight her talents on stage.

The standout performers by far are Bernstine and De Shields. Bernstine, a CSC veteran performer, has excellent comedic timing, making Celia one of the most memorable characters of the production. De Shields, a celebrated Broadway performer best known for his roles in “The Wiz” and “The Full Monty,” makes his CSC debut with this role. He plays Touchstone with such wit and energy that he steal the scene every time he is onstage.

“As You Like It” runs at Classic Stage Company until Oct. 22.