McShane Sits Down with Student Press

President talks DACA, transparency on campus and the U.S. News and World Report 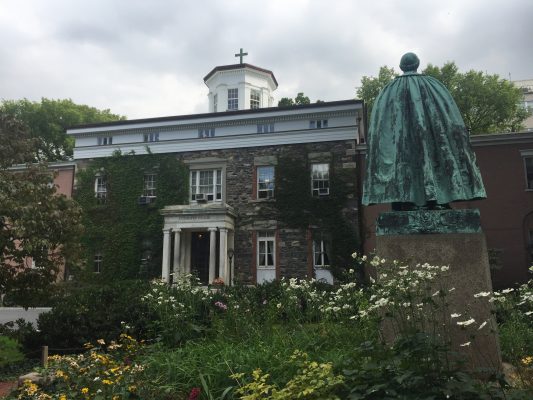 Editors from the Fordham Observer and the Fordham Ram met with Fordham President Rev. Joseph M. McShane, S.J. on the gray afternoon of Friday, Sept. 15 in the wood-panelled Council Room. We sat down at one half of the massive cluster of tables centered in the room, a bookshelf stocked with titles that could fulfill the CORE curriculum on one flank and an arrangement of cookies and packaged beverages sitting on an opposite table. A dark metal depiction of Icarus loomed in the corner next to the air conditioners.

Both newspapers arrived with the same agenda, the same questions weighing on all of our minds. This is how Father McShane took them:

What shall we do about DACA

“The most important thing right now would be getting through to members of Congress, both the Senate and the House, and pressing them on this. Right now, we’re told that about 78 percent of the American population is in favor of DACA and want to see this handled. So, I would think sooner rather than later, the vote should be taken.

“At Fordham, it’s in our DNA. We were founded by an immigrant, and the very reason for the foundation of what was Saint John’s College; there were two reasons: One, to preserve and pass on the faith in a very hostile environment. And the second was to break the cycle of poverty that immigrants were caught in. So this is our story, and in a very special way, the DACA students, both at Fordham and throughout the country are our people. We were founded to serve them, and it’s important for us to keep faith with that.

“Congress is the way in right now. Nothing else matters. No one else counts. No one else can do it. It’s the consciences of 535 women and men in the United States on Capitol Hill and they hold the future of this in their hands.”

Communications and the general dissatisfaction on campus

“In regard to communications, one of the things that I would like to do is have these kinds of meetings regularly, and I’ll ask Bob to see if we can’t get that set maybe once or twice each semester, so there’s contact there…I’m going to have a series of listening sessions where we have two each campus, each semester…That’s the first.

“Let’s be honest…there were issues and incidents of, say of weight, that we all had to wrestle with, and it started early in the year. We had one or two incidents that were unsettling for us…I know there was a swastika incident at the beginning of this year which really annoyed me to the teeth.

“There were other things that came up in the course of the year, of course culminating with a really difficult last month of the school year. I think a lot of it is communication, but also, the incidents that we all wrestled with last year, they were weighty, and highly freighted with great emotion and principle on both sides, if there are sides. And I know you’ll think I’m being either pollyannaish or worse when I say, for me, I can never believe there are sides. I can’t. For me, it’s the university, and I have to work with everyone. I want to make sure everyone is listened to, heard and attended to. Did I succeed last year? Well the answer is no, isn’t it? I didn’t.

“A lot of it was local. And I think we didn’t communicate, I didn’t communicate well, and I know people find this hard to believe, but I love this place. After God it’s what I love most. And that’s the truth. My image is of a community of scholars who are bound together by respect, reverence and mutual affection. And I felt the loss of that last year, deeply.

“I have purposefully not dipped into that because I guess the report comes to me, and I don’t want to in any way seem to be trying to influence it in any way. So I don’t know. I do know that it is underway. I’m told it should be completed in the near future. Now I don’t know what the definition of near future is. I’m hoping it’s 10 days, because I want it to be taken care of.

“When we talk about cura personalis, we talk about the care that the university gives. For me, there’s also the implicit pledge of every person on the campus, student, faculty and staff, to treat one another with great care, and therefore for me, at the very beginning of it, sexual assault is a violation of the solemn promise that we make to one another…that there will be no violence.

“Sexual assault begins in a diminution of the Other, which is the opposite of cura personalis and the opposite of treating people with reverence, respect and great affection. It is an abuse of the person by denial of their worth. That’s where it begins, and then it takes on physical form in the sexual abuse itself.

“For me, it’s a sinful thing, and I know that sounds very old fashioned, but for me that’s a loaded word, because it is a violation of the honor and the dignity of the other person and a use of somebody else for your own pleasure. I find that distasteful, and I find it dishonorable, and I can’t say enough negative about it.”

“The crowd from 30 to 60, they really do extraordinary, I would say, strenuous breakdancing. And some swing. We have been…Look, I am so frustrated. We’re better than 61. I think we have a terrific faculty, and I mean that. We have a terrific faculty, we have the best location in the world, we have the most exciting opportunities for our students, and our students do great things. They’re great when they walk in, they’re better when they leave…We have been dancing with 10 schools, and those 10 schools are the ones that we’re tied with this year.

“For us, I’ll tell you what it is. Our endowment is $727 [million]…When I came, it was $226 million dollars. Now it’s $727…If it hadn’t been for the recession, we’d be above a billion and I’d be a happier guy. Look, I’m not supposed to be concerned about money at all for God’s sake. Look at the way I’m dressed. I have a vow of poverty! But I pay attention to this all the time. Why? Because money…two things. One, money is seen by others as, in the old words, an earnest of worth; a proof that if you have that money, you’re good. So that’s the first and the second, frankly, is we’re so committed to financial aid. ninety percent of our kids receive financial aid.”

“What we did last year was we did have to shuffle the budget for the current fiscal year, and there were certain things that were tripped up … around the outsides, around the peripheries of life. So travel, entertainment, food, things like that, we went after right away in order to find the money.

“No core services were trimmed. We do have a 120-day delay period for replacement hires, which does return to us a fair amount of money, or doesn’t let a fair amount of money get spent. Front line positions of faculty and student life staff, those would not be cut because they’re front line student-facing positions. So that’s the way in which we held it together. We also did not, and I know that this is a big, big concern, it’s a concern of mine, we did not cut financial aid. We did not. We will not. Not as long as I’m here.”

“I’m never against the unions. I had real concerns about…you know, is this the right time…so I spent a lot of time talking to Jesuits who are in social ethics and catholic social teaching, and I actually worked on this when I was in grad school. So no notional opposition to it, but timing and all that.

“I honestly think that we’re going to have something within, I’m going to give you a three week thing. If it’s sooner than that, wow! If it’s just three weeks, good. If it goes beyond that, you’re going to kill me. So I’m going to say that I’m hoping. Say, in a month, within the month.”