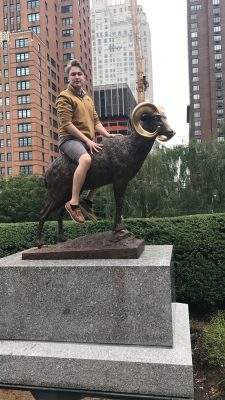 Top university officials dropped a 500-pound bombshell on the student body just weeks ago—what has been described as a “giant metal ram” by onlookers has been installed on Fordham’s singular stronghold of grass.

“I didn’t know what our mascot was, and I didn’t want to know,” said Alan H, a freshman known for blowing off floor meetings and taking the elevator to his 2nd floor class. “This is another bold-faced attempt by the university to foist spirit on our school.”

Murmurings among the shocked crowd gathered around the metal colossus suggest students are outraged, distressed and under the impression that school pride was just kind of a thing that Rose Hill did.

Cult implications have run rampant through Fordham’s beige, undecorated walls. Students fear that erecting effigies is only the first step toward the slippery slope of school spirit.

“What’s next, pep rallies? If I wanted to get my buddies together and spell out “Fordham” on our chests, I would’ve gone to Penn State,” said Colby W., a junior who enjoys living weeks on end without setting foot outside. He quickly fled through the Gabelli doors before further questions could be asked.

Within minutes of the statue’s arrival, hundreds of charters for pep bands, intramural sports teams and improv comedy groups inundated student council email servers. Levels of mindless prejudice and unfounded feelings of personal supremacy—side effects associated with “team spirit” and “rivalry,” per a 2010 study—have undoubtedly reached all-time highs in the university. Mascot-emblazoned spirit wear was completely sold out three days following the incident, with more on the way. The result: hundreds of students rallying behind the siren song of the metal ram.

Ranging from casual acceptance to violent rejection, the reaction among the population has been mixed. Another freshman, Kelsey L., weighed in: “Sure, now we have a puppet to draw a false sense of collective from. But was there tofu in the dining hall yesterday?” She continued, urging our correspondent to watch What the Health and see the truth.

Long-term effects on the student body are still under close watch; already young people have been spotted attempting to tailgate before important mock trial events. Experts posit that if the ram’s presence remains unchecked, full-sized flag football games may appear on the plaza as early as 2020—with disastrous effects on local social ecosystems and sedentary lifestyles alike.

It is yet to be seen whether foreign notions of “school spirit” and “school pride” brought about by the newly-ubiquitous ram will stick to the hearts, minds and nondescript buildings of Fordham University Lincoln Center. Nevertheless, the ram remains: keeping watch over the subjects of its new domain and patiently waiting for a game of KanJam to start in its midst.